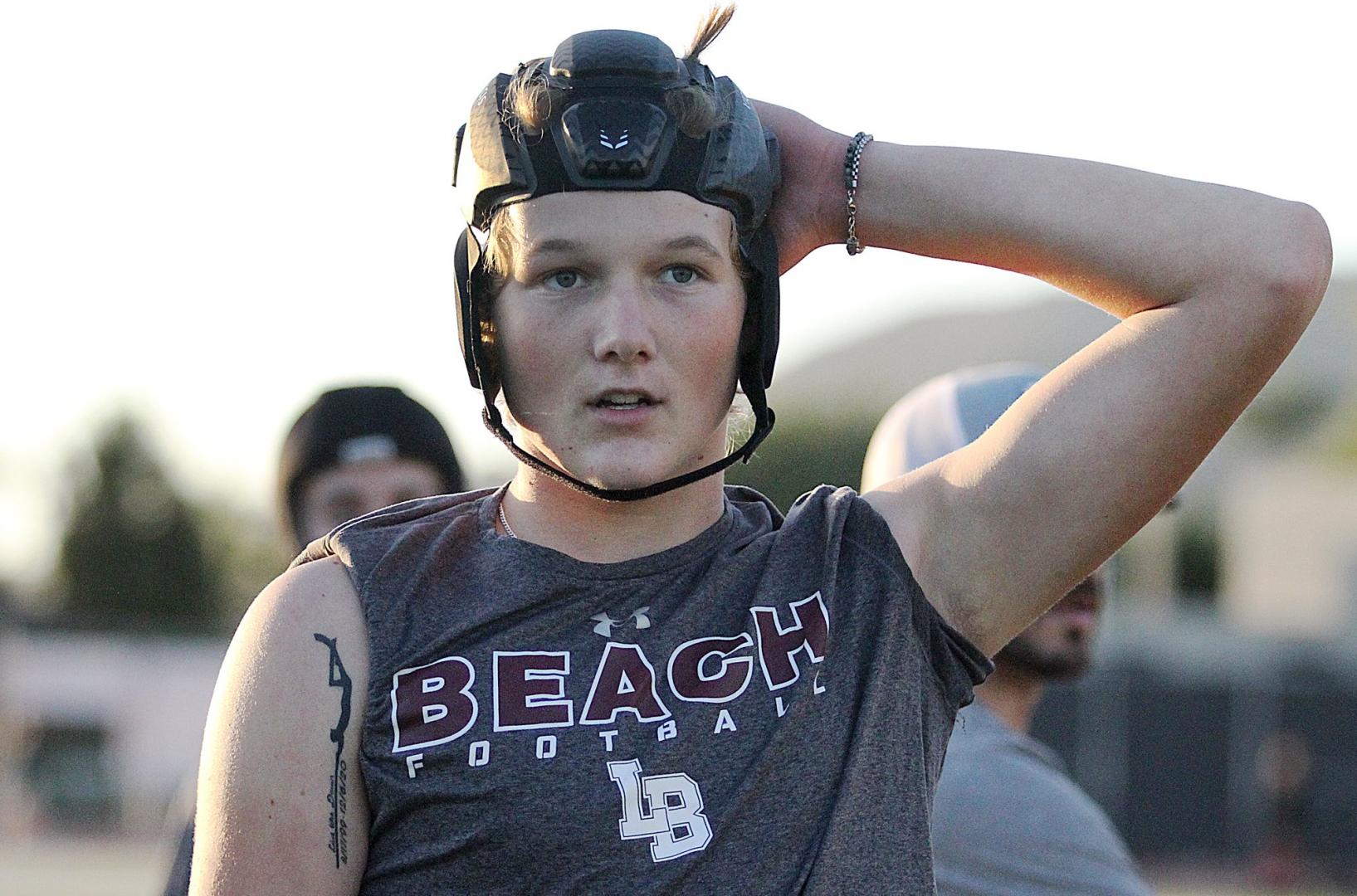 Laguna Beach senior quarterback Will Bingham looks on during a practice in Laguna Beach, Oct. 18, 2021. Bingham is dedicating the season to his older brother who died in a deep sea diving accident last December. His tattoo on his right arm reads "Live like Devin" (Ryan Kuhn, SOCoPrepSports.com)

LAGUNA BEACH — Laguna Beach quarterback Will Bingham walks onto the field for practice with a smile.

Before long, he picks up a football and starts throwing routine passes to his receivers.

“If you are a happy person, you are the best person you can be,” Bingham said.

His brother Devin taught him that.

“There might be some hiccups along the way,” Bingham continued. “As long as what you are doing is bettering yourself and the people around you, at the end of the day, it’s going to make you a better person.”

Devin also taught him that.

Bingham is having fun and enjoying his senior year.

And why wouldn’t he be?

As the sun sets on the Pacific Ocean, slowly darkening Guyer Field and the team’s practice, he continues to throw routine passes until the final whistle.

“Life is short,” Bingham said. “Do what you love and make sure to have fun doing it.”

Those are the words Bingham lives by. The same his brother lived by.

Bingham grew up on the Orange County coast with his three older brothers, Brooks, Berkeley and Devin.

Their lives were turned upside down when Will reached the seventh grade and their father announced they were moving to Costa Rica. 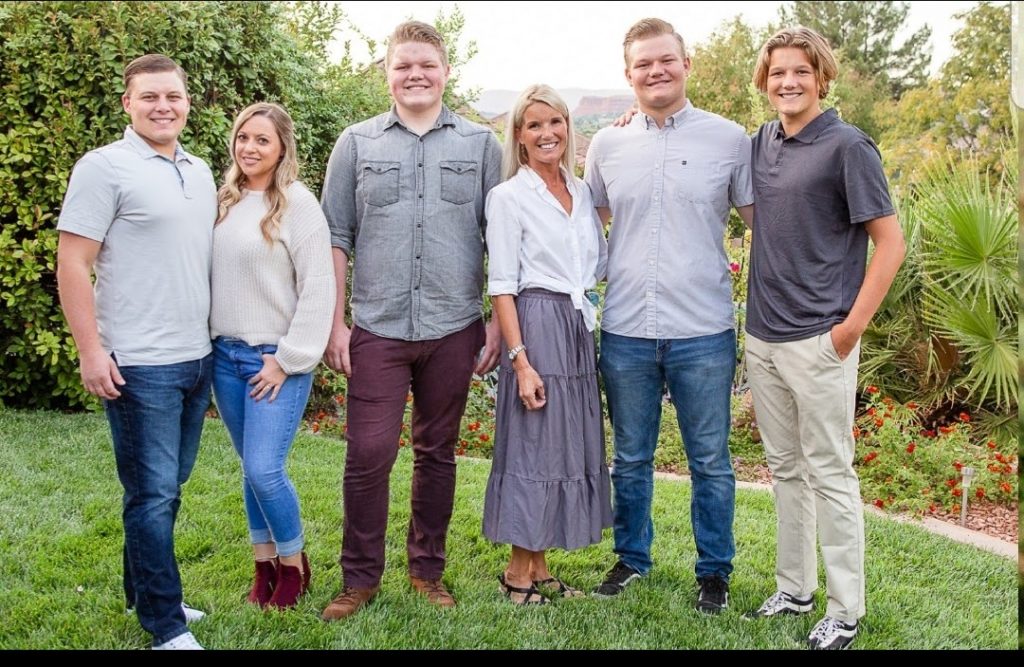 The family lived there seven months and Will and Devin made the best of it, spending their free time diving and learning to spearfish.

They enjoyed their time together and they fell in love with the ocean.

Eventually, another change came and the family was uprooted once again.

“We had no idea where we were going to go,” Will’s mother, Pilvi Bingham said. “I was freaking out.”

With just $37 in her bank account, Pilvi Bingham reached out to anyone she knew for help. Her family ultimately came to their rescue by combining all their airline miles and bringing them back to the United States.

Will and his family lived in Utah for a few months, sleeping in his aunt’s living room, and eventually they made it back to Laguna Beach. The long journey was over. They were finally home.

“I just wanted something normal,” Pilvi said. “Will had started kindergarten here in Laguna Beach so this is really all he knew.”

Will has always loved throwing a football around.

He started his sophomore year at Laguna Beach High School as a linebacker and receiver, but coaches moved him to quarterback out of necessity.

“All these quarterbacks in Orange County grow up with private quarterback coaches or playing in the 7-on-7 leagues. Will had none of that,” Breakers coach John Shanahan said. “He has really risen to the challenge.”

By the end of 2019, Bingham was finally going to have his chance as the team’s starting quarterback, but he would have to wait.

The following season was delayed due to the coronavirus pandemic, during which tragedy hit his family.

It was something no one in the family would have expected.

Will and his brothers always loved the ocean. It didn’t matter if they were swimming, surfing, scuba diving or spearfishing.

“It’s one of those things where, when you are in the water, you are in a whole different world,” Will said. “Not many people get to see what you get to see.”

Devin, who is five years older than Will, got a job at a spearfishing shop in Costa Mesa and it became his passion.

“He dove for fish such as Yellowtail and White Sea Bass,” Will said. “He could dive as far down as 120 feet. He always made it a point to do it without a tank because he said that’s cheating. He was a free driver.”

Devin’s career took him places such as Baja California and even completed a three-month sailing trip from Mexico to Hawaii.

“He used to catch 200-pound grouper and just share the fish with the nearby villages,” Will said. 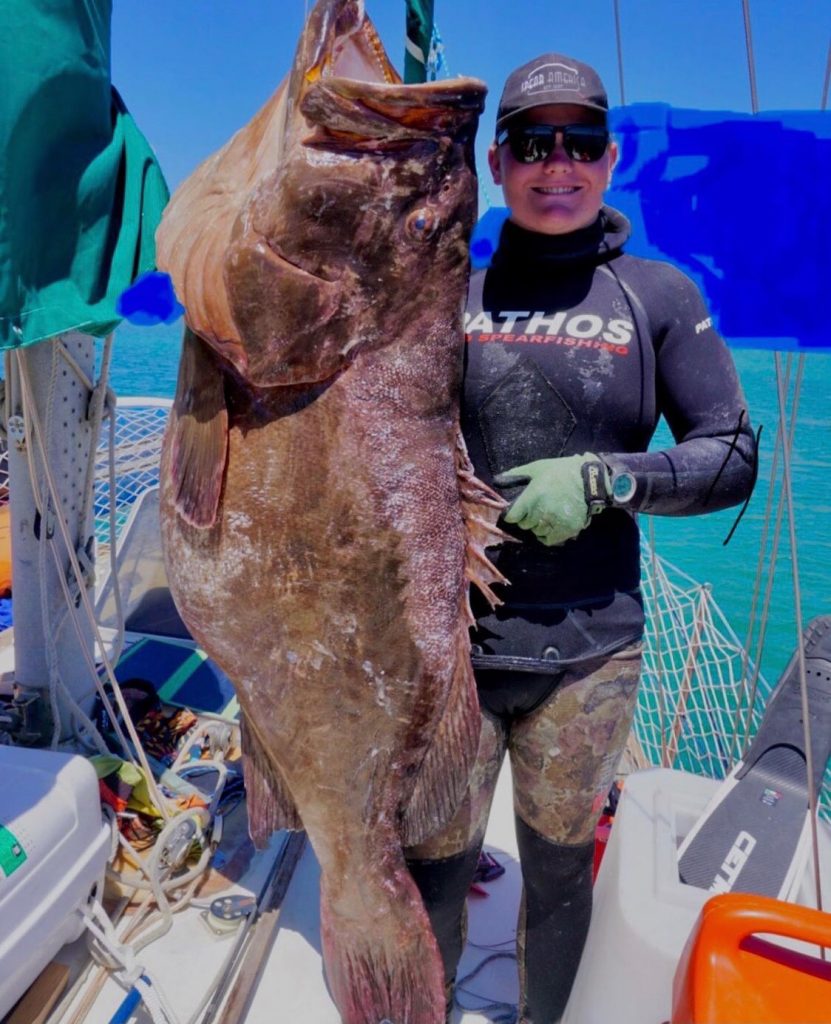 Devin Bingham watches a 1504-pound grouper off the Sea of Cortez in April 2020. (Courtesy of the Bingham family)

While in Hawaii on Dec. 6, Devin and a friend went diving.

Will was coming back from the beach with some friends and got a call saying to get ahold of his mom. Devin’s friends weren’t sure where he was and he was informed something had happened.

“I’m thinking he’s an idiot, he will pop up, but after four or five hours it was getting serious,” Will said. “I just wanted to know what was going on.”

The phone finally rang. Will and his family’s worst fear had come true. Devin suffered a deep-water blackout, losing consciousness on the accent during his dive, and had drowned. He was just 21 years old.

“It was one of those things because, the way he lived his life, we always had the gut feeling something could happen, but when it happened it felt like I was dreaming. It wasn’t real,” Will Bingham said. “We always expected it but we never got the call from him saying ‘My bad guys, I totally forgot to call you.’”

Will went to football practice the next day trying to push it out of his mind. Shanahan came over and gave him a big hug.

“I wanted to be on the field to clear my head. It was one of those things that I use get my mind off of things,” Will Bingham said. “I was so focused on why this happened to me. When I was out on the field, it was all about bettering the team and being with my teammates.”

He knew it was what Devin would want.

“As brothers, we pushed each other to be the best we could be,” Will Bingham said. “All my brothers are like that. My brother was the best diver and I want to be the best at what I do.”

Will, along with the Laguna Beach football team, struggled when the season started three months later.

The Breakers lost four out of five games and Will threw more interceptions than touchdown passes.

But he knew he could bounce back, both on and off the football field. He knew it would have been what Devin had wanted.

After last season, Will and his mom wanted to honor Devin’s life by getting tattoos.

Their designs were different, but both honor Devin’s memory. Will added a silhouette of a spear fisherman catching a mahi-mahi, Devin’s first big catch, but the message was the same on both tattoos.

“Live like Devin,” Will said, reading his tattoo. “He taught me to enjoy things.”

“There is a quote from (Ernest) Hemingway that Devin and his friends liked that says, ‘Every man has two deaths, when he is buried in the ground and the last time someone says his name. In some ways, men can be immortal.’” Pilvi said. “Devin had this massive life and, every time someone asks about my tattoo, I get to say his name. He squeezed more into his 21 years than I have squeezed into my 48 years. Take a chance, even if it’s scary.”

It’s been 10 months since Devin passed and Will has turned his season around.

Laguna Beach has won six of seven games since a loss to Dana Hills on Aug. 27, and it now boasts an offense that averages 36.5 points per game. 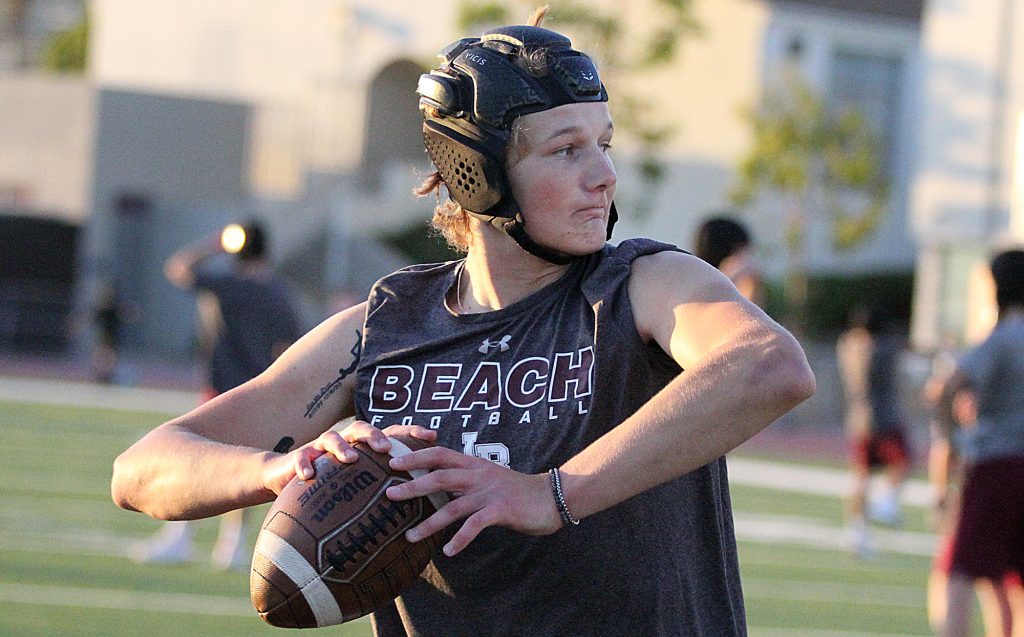 Laguna Beach senior quarterback Will Bingham steps back to throw a pass during a high school football practice in Laguna Beach, Oct. 18, 2021. Bingham has 2014 passing yards and 29 touchdowns this season. (Ryan Kuhn, SOCoPrepSports.com)

Will enters his final two games against Ocean View and Godinez Fundamental having thrown at least five touchdown passes in three of the eight games this season.

Every time he throws one, he makes sure to let Devin know to keep watching.

“After every touchdown pass, I point up to the sky,” Will said. “(Devin) was one of the people who pushed me to play football. I want to make him proud.”

Will has already decided to hang up his football jersey after high school. He plans to move to Island Park, Idaho, just south of West Yellowstone, following his graduation in order to build cabins on purchased RV parks.

The ocean was something he shared with his brother. Now it’s time for a new adventure.

Will paddled out for the first time since Devin’s death this past spring. He sat back and enjoyed the sights, the sounds and reminisced.

He was one with the ocean, just like he and his brother used to be, but he wants to try something different.

But no matter where his adventures take him, all he has to do is look up to the sky or down to his arm and he knows there will always be three words to live by.