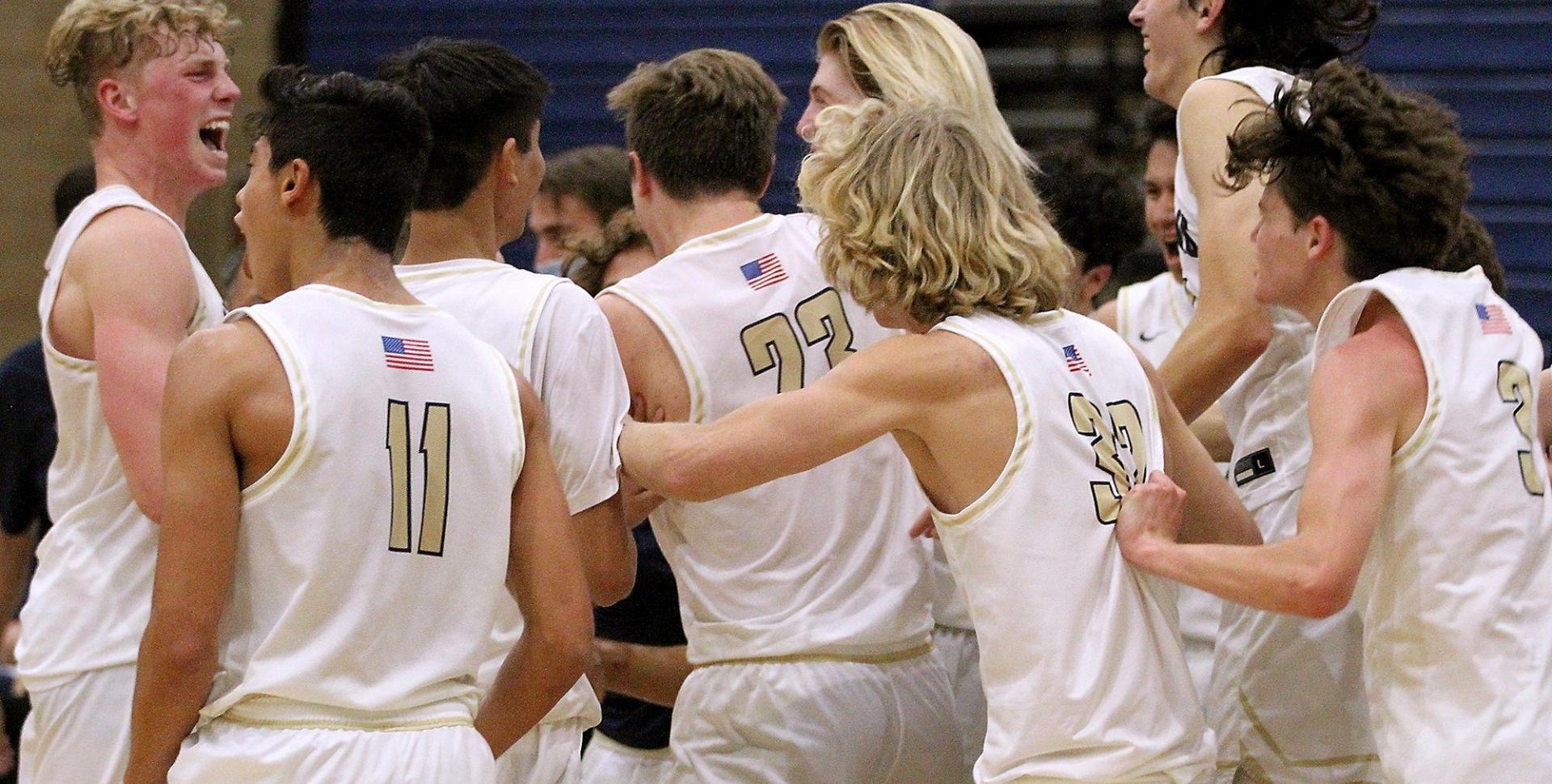 Mmebers of the San Juan Hills boys basketball team celebrate their first league title in the school’s history after they defeated El Toro 73-53 on Friday, May 21, 2021. The team will now wait to see who they face in the first round of the CIF-SS playoffs that start next week. (Ryan Kuhn, SOCoPrepSports)

SAN JUAN CAPISTRANO — In the closing seconds of Friday’s final regular season game, Ryan Little rushed to the bench and let out a scream of joy before hugging his teammates.

It has been long journey for the San Juan Hills boys basketball team.

The players watched their coach struggle over the past two years through health issues after he was diagnosed with treatment-induced neuropathy of diabetes, a rare form of neuropathy that causes extreme pain throughout his nervous system.

This season could have been cancelled after the coronavirus pandemic broke out.

After receiving news that they were going to play, they were forced to wait and quarantine for two weeks after a player tested positive for COVID-19.

But, through it all, they ended up making history.

The Stallions won their first ever league championship by defeating El Toro 73-53.

They share the title with Aliso Niguel as each have a win against each other and finished 5-1 in league play.

“It feels amazing,” Little said. “From that first practice to the first game, I told my teammates that we have something to prove. We were going to put a banner on that wall.”

They had won six straight games, including a victory over league favorite Aliso Niguel.

And it didn’t take long to take control of the game.

Little scored four of the first six baskets, and the Stallions held an eight-point lead after five minutes of play.

By the end of the first quarter, San Juan Hills was ahead 20-10, with 10 of those points coming from Little.

“I just had that extra motivation, it being my senior season and senior night,” said Little, who finished with 17 points and 14 rebounds. “I wanted this (league) title tonight so bad.”

Phillip DeGree and Vincent Pirro were also celebrated on senior night and continued to show what they could do.

DeGree scored nine straight points to start the quarter, including a 3-pointer from the wing.

Pirro stepped in with a basket and San Juan Hills conveyed team basketball.

“Our practices were really focused on catching up because we were in that quarantine for two weeks. We had to persevere together as one,” Pirro said. “We were excited to get back.”

Stallions head coach Jason Efstathiou said that, in order to keep his players focused, he sent encouraging group texts and also made his players send videos of what they were working on each day.

“(The quarantine) definitely set us back, but we learned how to get a rhythm and how work that much harder,” Efstathiou said.

San Juan Hills stayed in its rhythm during the second half, extending the lead to as much as 20 points after Little scored another bucket.

El Toro put together a small run with about three minutes left in the third quarter as Alec Martin hit a three to shrink the Stallions lead down to 12-points.

San Juan Hills found its touch behind the 3-point arc throughout the fourth quarter with made shots by Little, Mark Reichner and Jacob Simon, and the players knew the countdown to celebration had started.

“I’m so proud of these boys,” Efstathiou said.

As Efstathiou watched his players celebrate, a satisfied smile came across his face.

The last two years were difficult because of his condition. He missed time as a teacher and he missed time with his players as a coach.

“The players, the parents and of course my own family have always been there for me,” Efstathiou said. “I still struggle (with my health) but this win this season has really picked me up.”

There is no rest for San Juan Hills. Instead of waiting until Sunday for the bracket to be released, it scheduled a non-conference road game on Saturday against Corona del Mar then onto the CIF-Southern Section tournament.

“We won a title but now it’s important to stay focused and stay motivated,” Little said. “We still have plenty to prove and we want to bring home a CIF title.”