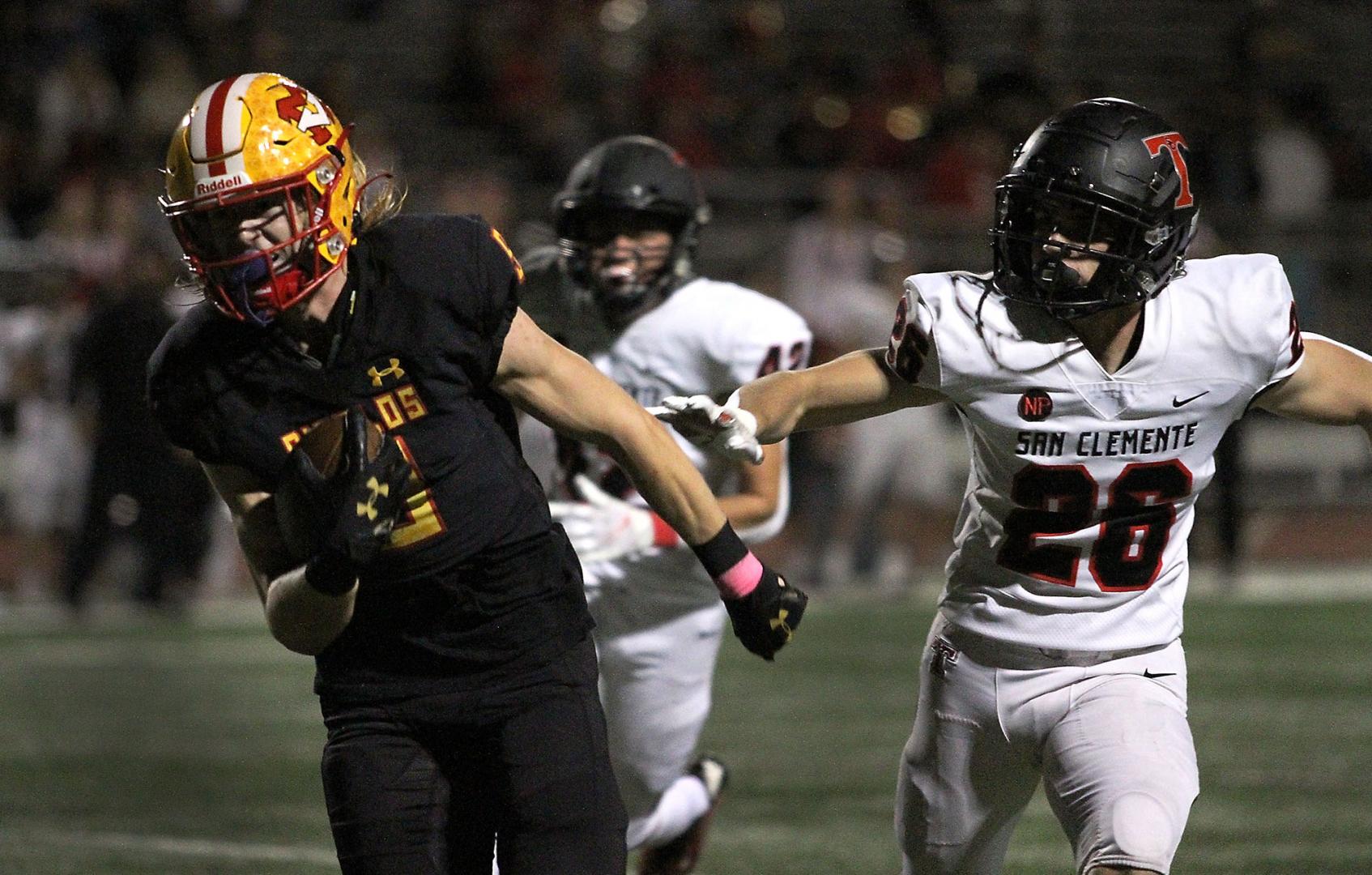 It made a statement of where it should be placed in the CIF-Southern Section playoffs.

The Diablos celebrated with a 45-0 victory over the Tritons on Friday. The win also clinched them a  South Coast League title and puts them in a position to be selected into Division I playoff bracket with teams such as Mater Dei, Servite and St. John Bosco.

“We want to be in the open division every single year,” Johnson said. “This is a big rivalry win for us.”

It didn’t take long for Mission Viejo to throw the first punch.

After holding San Clemente to three-and-out on the game’s first possession, Diablos quarterback Kadin Semonza placed his first throw into the arms of KJ Reed for a 63-yard touchdown pass.

“It was a great way to set the tone and get the game going,” said Semonza, who threw for 282 yards and four touchdowns.

The Tritons tried to answer with a field goal, but the snap sailed too high.

Mission Viejo capitalized on the mistake and scored again, this time on a 4-yard pass to tight end Brayden Doherty.

“We just went out and executed,” Semonza said. “We did what we needed to do.”

San Clemente put up a season-high 49 points last week against Tesoro, but couldn’t get any offense going.

It’s third punt in four possessions turned into another Diablo touchdown early in the second quarter when Semonza found junior wide receiver Jackson Holman on a 32-yard pass down the Triton sideline.

Holman was just one of four different receivers who caught a touchdown pass and Johnson said each one of them brings something special.

“KJ has elite speed over the top, Jackson and Brayden are big targets for us and Mikey (Matthews) is the best football player we have. He can do everything,” Johnson said.

Matthews, entered the night as the team’s leading receiver and soon enough became a go-to target.

He gained momentum catching a 27-yard pass to set up Holman’s touchdown. Later in the quarter he caught a 12-yard pass as muscled his way through San Clemente defenders into the end zone.

“Coming off last year’s heartbreaking loss in the fourth quarter, this game and the way we won meant a lot,” Holman said.

The Diablos continued their momentum throughout the second half.

And because it was two days before Halloween, they even added some trickery.

Mission Viejo excited a wide receiver touchdown pass as Semonza threw it to Holman who threw it 53 yards to reed for a touchdown.

The play was put in after Johnson said he learned that Holman could throw.

“I’m just trying to show I can do everything on the field,” said Holman, who finished with eight receptions for 158 yards and a touchdown score.

By the fourth quarter Mission Viejo had control and the running clock was turned on. They added a field goal, just for good measure.

It was only a matter of time until they celebrated with the student section.

“You love to see a win like that,” Holman said. “We are celebrating tonight.”

Mission Viejo will now start preparing for their 16th straight playoff appearance. The only question is who will they have to face?

Johnson has preached the importance of scheduling tough non-league opponents all season and has won over Sierra Canyon, Alemany and Long Beach Poly.

“I think we played enough good teams that successfully prepared us for nights like tonight,” Johnson said, “Now we wait and see.”