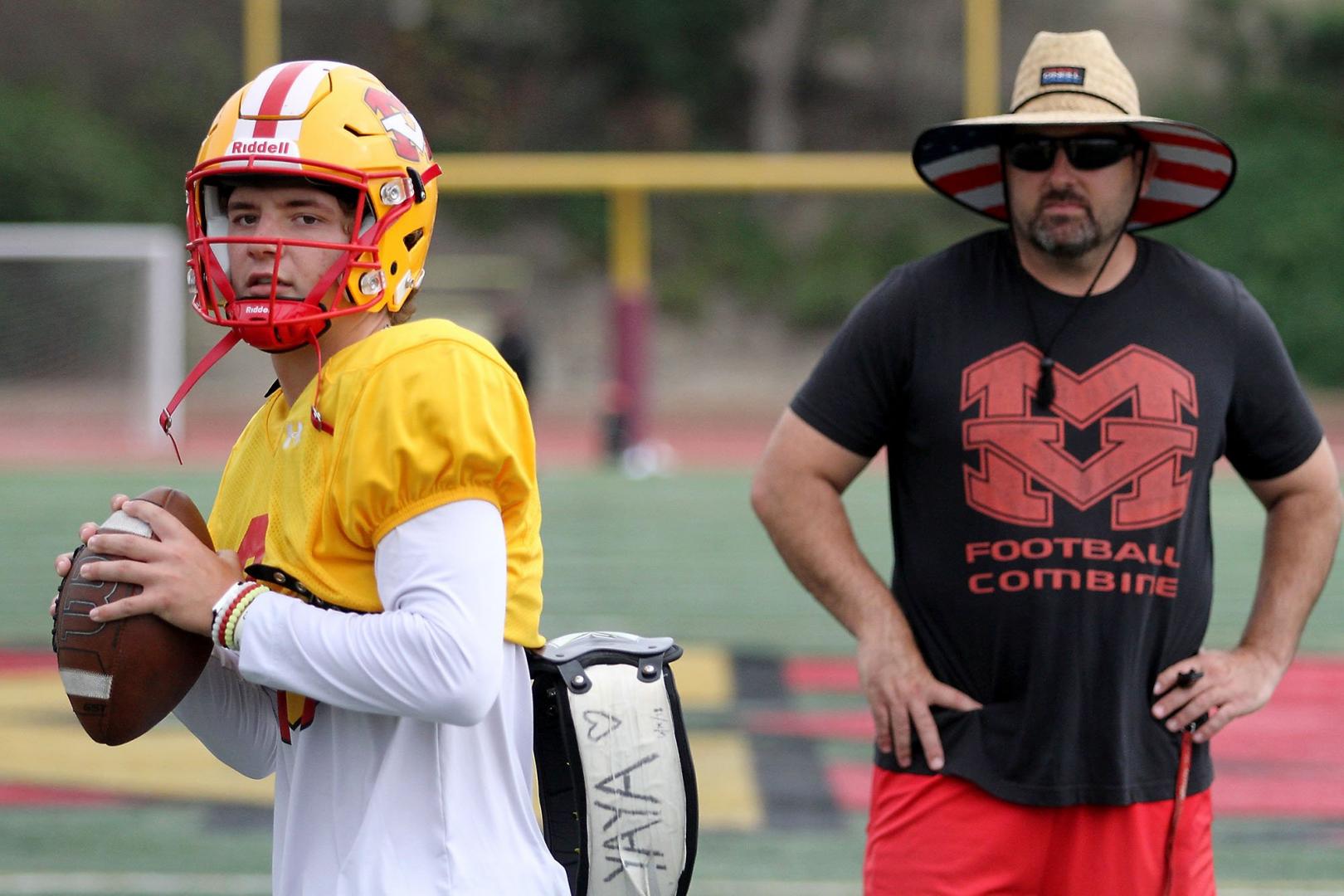 Mission Viejo junior quarterback Kadin Semonza looks to throw to a receiver as his coach, Chad Johnson, looks on during a practice in Mission Viejo, Sept. 1. Midssion Viejo will travel to Long Beach Poly on Friday. (RYan Kuhn, SOCoPrepSportrs.com)

It has been more than two decades since the Diablos lost a regular season game by more than 30 points.

Mission Viejo was upended by Servite in a humbling 44-7 loss at Orange Coast College.

“We just made mistakes that were self-inflected and caused us to get down,” Johnson said. “The stage was a little bit too big for our young guys. When you talk about learning from this game, you have to be able to control your emotions in a game like that.”

But everyone knows there is no time to rest.

The Diablos have to get back on the bus and travel to Long Beach Poly on Friday.

Johnson has scheduled games against top-50 teams in California such as Apple Valley and Servite, not only as a challenge, but also out of necessity.

He cannot recruit players like private schools can, but he can do his best to mimic a Trinity League schedule to give his players as much exposure as possible.

Even if that schedule could lead to some losses.

“There are multiple kids who play on Trinity League football teams who live in Mission Viejo. It’s some of their top guys too,” Johnson said, “When you talk to their families about their decision not to come to their hometown school, a big part of it is the exposure the Trinity League gives their kids. We are in a day and age where we are trying to compete to keep our kids (here at Mission Viejo).”

Mission Viejo’s season continues against another program with a successful history.

Despite their recent successes, including four straight playoff appearances, the Jackrabbits lost their season opener to J Serra last week.

“Poly’s defense is going to pressure like crazy,” Johnson said. “They are a complete different opponent than Servite,”

Curry was one of three players to score a rushing touchdown.

But Mission Viejo also has a quarterback who has shown he can make an impact.

Last week, he threw a pair of interceptions, a first in his high school career, but knows that, as a leader, it is his job to pick up his team.

He had already proven his capabilities in the spring against the South Coast League with nine touchdown passes, and he knows his team has the confidence to return to form.

“We need to get back to the basics and just execute.” Semonza said. “If we execute and have no mistakes on our part, we will be successful on Friday.”

Mission Viejo knows its schedule doesn’t get easier after this week. Games against Leuzinger and Sierra Canyon are on the horizon.

But it also knows that, to stay competitive against the Trinity League and the top teams in the CIF-Southern Section, those games are necessary.

By the end of the season, the Diablos hope Thursday’s loss will just be an afterthought.