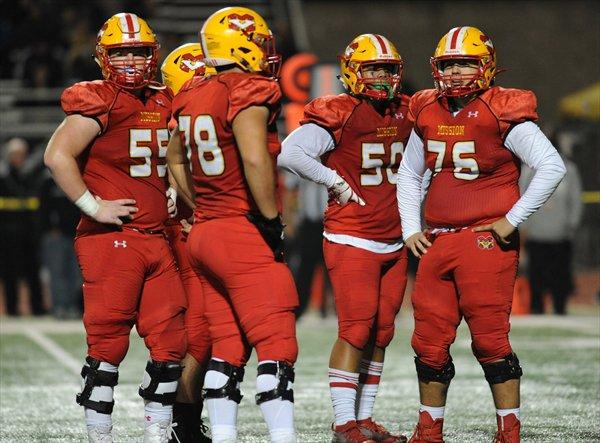 Mission Viejo football players prepare for the next play during a CIF-SS Division I playoff game against Servite. The Mission Viejo seniors are looking forward to one final season together as a group ( Ming Chung Lin, Maxpreps.com)

But before they pack their bags and head to college, they want one last run as teammates.

“It was an easy answer to be out there again,” said Mascarenas, who is heading to Oregon State.

“I started my freshman, sophomore, and junior seasons with these guys,” Cal commit Anderson echoed. “I want to finish my high school career with my teammates.”

Coach Chad Johnson said the decision his seniors have made to play their five final high school games says a lot about their dedication.

“We had senior players opt out who are not in the same boat as these players,” Johnson said. “We kind of get a bad stigma all the time that we are like a Trinity League team with players from everywhere but that’s not the case. These are home-grown kids and they have been playing together since they were four or five years old. “

Mission Viejo football has seen success for the last decade, most recently with an undefeated regular season during the 2019-20 campaign before a 49-24 loss to Mater Dei in the CIF-Southern Section Division I playoffs. Johnson knows their success has put a target on his team’s back but, as in years past, he has accepted the challenge.

“We are definitely not looking past anybody,” Johnson said.

The Diablos will have a packed schedule that includes games against La Habra, San Clemente and San Juan Hills, but they will not face any Trinity League teams for the first time in six years.

While Johnson has expressed excitement to get the season underway, especially with the number of players he is returning, the pandemic has affected his team, as it has many programs in the area.

After watching junior quarterback Peter Costelli throw for nearly 2,000 yards, 23 touchdowns and get intercepted just five times, the University of Utah commit announced in late December he was getting an early start on his college career after completing his high school graduation requirements early.

“My intention was always to graduate and enroll in Utah early. After the infinite delay of the spring high school season, I had to make a decision before the window to enroll early closed,” Costelli said in an interview with the Orange County Register. “It was a tough decision and I am going to miss my coaches and teammates.”

Costelli’s decision to leave opens up the quarterback spot to sophomore Kadin Semonza.

“Going into the year, we had four quarterbacks and, obviously, our quarterback last year is at Utah,” Johnson said. “(Quarterback) John Burns, who is a phenomenal athlete, is also a great baseball player so he has decided to play baseball. We will also have freshman Ryan Hansen.”

Semonza played in five games as a varsity quarterback last season, completing 13-of-16 passes for 137 yards.

That’s not to say Semonza will carry the team on his back alone.

Robertson, who is heading to Northern Colorado, ran for 832 yards and 15 touchdowns, Anderson caught 34 passes for 533 yards and seven touchdowns, and Mascarenas finished second on the team in total tackles and intercepted three passes.

There might not be playoffs for Mission Viejo this season, but that doesn’t mean the players are excited for this unusual spring season. They only needed two words to express their enthusiasm.

‘We are a family’: Capo Valley football quickly buys into coach Sean Curtis’ culture
Tesoro football and its coach looking forward to stepping back on the field