Elliot pitched a complete game, giving up one run, three hits and struck out seven in a 7-1 victory 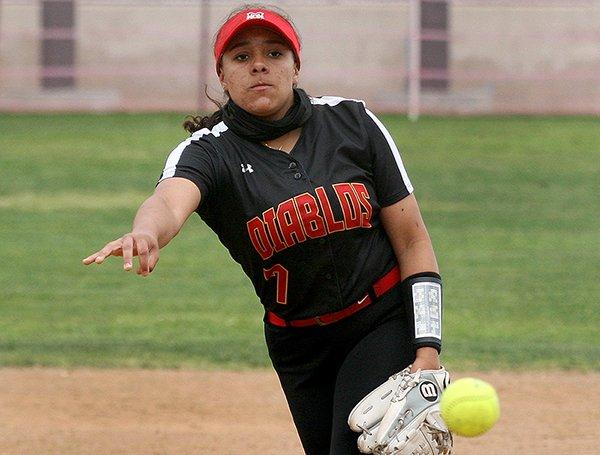 But when she stepped into the circle against San Clemente on Thursday afternoon, she sure didn’t act like one.

Elliot, who was making her second consecutive start over three days, pitched a complete game, striking out out seven batters in a 7-1 win over San Clemente.

“I don’t like to get nervous because when I get nervous I tend to overthrow my pitches,” she said.

She knows her opponents might be bigger than her with more experience, so she uses control and a change of speed to catch her

“I don’t throw as hard as most of the girls. I tend to rely on my spin and am really consistent with my pitches,” Elliott said. “I also rely on my defense. They always have my back.”

The Diablos defense stayed true not making an error the entire game, but her offense also added some early support.

It only took two pitches for Aygail Vieira to send a home run over the left field fence.

“I was really just trying to keep it simple and see a pitch low in the zone,” said Vieira, who has already committed to Clemson. “I didn’t think it went out off the bat.”

San Clemente tied the score in the third inning when Natalie Casto hit a home run of her own.

“Natalie is a great hitter,” San Clemente head coach Bill Malcolm said. “She’s been struggling a bit, but I think she’s starting to come out of it.”

But Malcolm said his team is still trying to find some consistency on offense.

The Tritons have scored a combined four runs in their first three games.

“We just haven’t been hitting very well,” he said.

Mission Viejo regained control in the fourth inning when senior Madison Vollenhals led off with a hit followed by RBI singles by Shayna Glass, Brooke Finneran and Sammi Woods.

Meanwhile Elliott continued to shut down San Clemente’s offense as she retired the final 13 batters in order.

“My screw ball was really working for me,” she said.

Not only was Elliott dominant as a pitcher, she also showed her competitors her ability to hit.

She finished the game a perfect 3-for-3 at the plate including a RBI-single in the top of the seventh inning to drive home Rachel Coleman.

“I love hitting,” Elliot said. “I know a lot of pitchers don’t usually hit in college but I would like to do both.”

The Diablos have scored at least seven wins over in each of their last three games, but their coach Clint Watson wants more consistency from his hitters.

“We feel like this whole lineup can put it in play, but we didn’t have good pitch selections,” Watson said. “Our second and third at-bats weren’t very good.”

His team has a quick turnaround game against Los Alamitos on Friday which features Division I commits senior catch Sophia Nugent and infielder Emma Sellers.

“We know we are going to see some good pitching and that’s what we want,” Watson said. “I just want them to be competitive.”

San Clemente will resume its season on April 13 against Dana Hills.