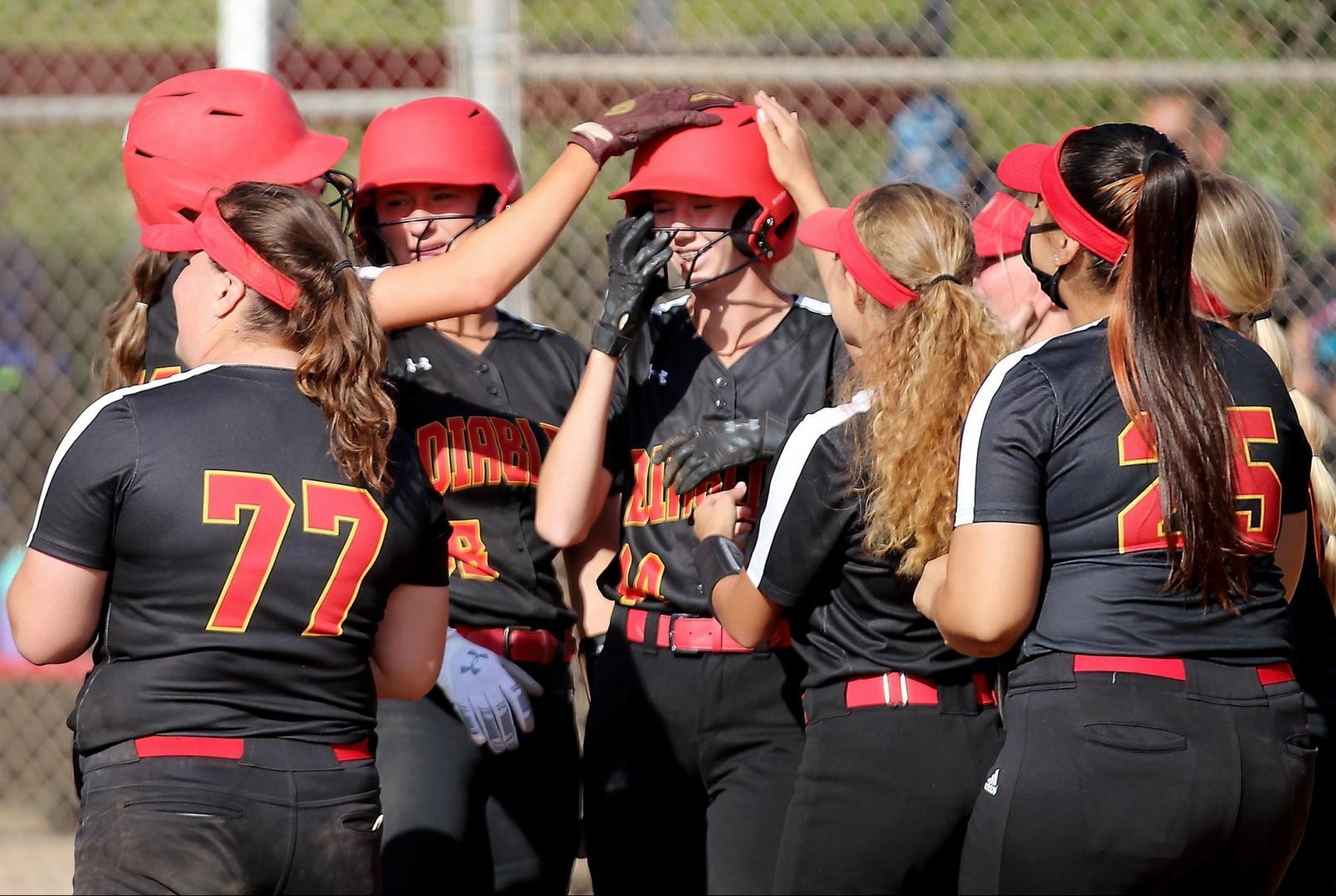 Mission Viejo sophomore Brooke Finneran is congratulated by her teammates at home plate after she scored the game winning run on a wild pitch in the eighth inning during a high school softball game against San Juan Hills, May 6, 2021. Finneran is just one of the many returning players for the Dialos this season. (Ryan Kuhn SOCoPrepSports.com)

The Diablos lost at home to Warren in the first round of the CIF-Southern Section playoffs.

So it makes sense, that the group of returning players are more focused than ever.

“They got the taste of victory winning league last year and they are hungry,” Mission Viejo coach Clint Watson said.

The Diablos graduated some big bats including Abygail Vieira, Olivia Birkinshaw who combined for nine home runs and 22 RBIs but Waston is confident he has a mixture of veteran players and incoming freshmen that can fill the voids.

“We have some pitching, we have some speed, but we are really relying on our seniors this year,” Watson said. “It’s going to be a good group.”

Despite an experienced group returning, the Diablos graduated more than 80 percent of its home run production and will have to find other ways to manufacture runs,

“Small ball is going to be new for us this year because we have always had power hitters in the lineup,” senior Lily Troiano said.  “This year we have to make an adjustment.”

While she finished with a 3.13 ERA and walked just 18 batters, she logged almost 100 innings last year and will be the first to admit her arm got tired by the season’s end.

“Most definitely,” Elliott said with a smile. “I ran out of gas by the end and I’ve done a lot more stretching this year to keep my arm healthy.”

But this season she will also get some relief in the form of freshman Reece Uehara who will be more than capable of taking some of the load off Elliot.

“She is great,” Elliott said. “She has good speed, good accuracy and I trust her a lot.”

While Elliott had some help last season in Daniella Sanchez and Desiree McGruder, they combined for just 17.2 innings last season.

“I really had to trust my defense especially when I was tired,” Elliot said.

Mission Viejo starts its season this weekend with doubleheader against Lakewood and El Modena but will also face the top two Trinity League teams from last year in Orange Lutheran and Santa Margarita Catholic to prepare for s challenging South Coast League.

“This league is always a dogfight,” Watson said. “If we can score some runs this year then I feel pretty confident.”

And the players returning know what it takes.

“If anything got in our way last year we found a way around it,” Glass said. “We have such good team chemistry.”