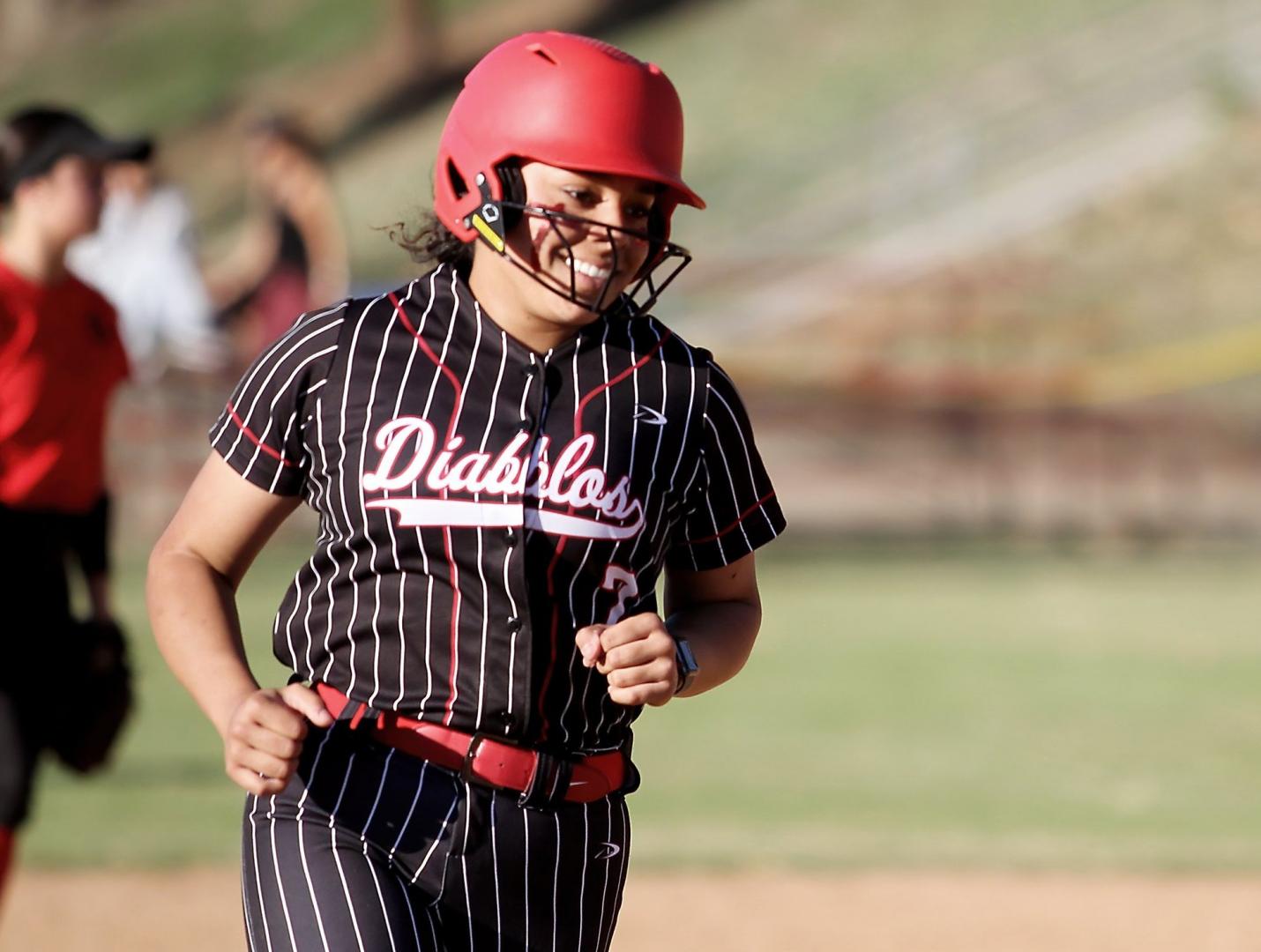 Mission Viejo sophomore Sofia Elliot rounds the bases after hitting her second homerun in the third inning of a high school softball game against San Clemente in Mission Viejo, Thursday, Feb. 17, 2022. Elliott finished the game with two home runs, a double and 6 RBIs as her team won, 8-1. (Ryan Kuhn, SOCoPrepSports.com)

The Diablos took down San Clemente 8-1 with some help from two key underclassmen.

Sophomore Sofia Elliot hit a pair of home runs and finished with 6 RBIs while freshman pitcher Reece Uehara threw a complete game while striking out eight batters. Her only blemish was an unearned run in the fifth inning.

The win is the team’s fifth in a row to start the season.

Even though the Diablos graduated a good portion of its offense that included Abygail Vieira and Olivia Birkinshaw, the offense has quickly filled the void.

Mission Viejo has scored a combined 52 runs over the last five games and it didn’t take long for the offense to come alive on Thursday.

In the bottom of the first inning, Elliott blasted her first home run, a solo shot over the left field wall.

“It really boosted my confidence,” Elliott said afterwards. “I wanted to put us ahead anyway I could and give us a little room for Reece.”

San Clemente’s starting pitcher, Samantha Kowalski, settled down in the second inning, but once Elliott came back to the plate in the third inning, she hit her second home run, this time to right field.

“I’ve been really working on seeing pitches and seeing the ball come off the bat,” Elliott said. “We have been working a lot on hitting. I couldn’t have asked for a better start.”

She struck out junior Abby Rhoads to keep two runners stranded on base in the second inning, and struck out the side in the fourth inning.

“I have really been relying on my curve and change up,” Uehara said. It’s nice to have that change of speed working for me.”

Finally in the fifth inning, the Tritons were able to get onto the board when Tayler Barr came around to score on an error by Aliyah Gonzalez, but the rally didn’t last long.

Elliott came up once again, in the sixth inning, this time with the bases load and laced a double into left field to clear the bases.

“She really stepped up today,” Watson said. “She was the bat I was waiting for to step up this year. That’s what we want.”

San Clemente has scored just two runs over its first two games but first-year coach Jasmine Watson said she is really trying to get the players to buy into the program and believe in themselves.

“We want to go out and win league but also have fun doing it,” she said.

The Tritons will continue its season next Tuesday when it hosts Dana Hills while Mission Viejo will look to stay undefeated when it faces La Mirada and Orange Lutheran in two road games on Saturday.

Jasmine Watson was hired to take over for Bill Malcolm this past offseason and is the daughter of Mission Viejo coach Clint Watson.

In college was a three-time all-conference selection while playing at Syracuse.

In just her second game coaching in Orange County, she said she liked coaching against her dad.

“We keep it light and fun,” she said with a smile. “There is a lot of pressure in this game so it’s nice facing familiar faces, especially when it’s family.”