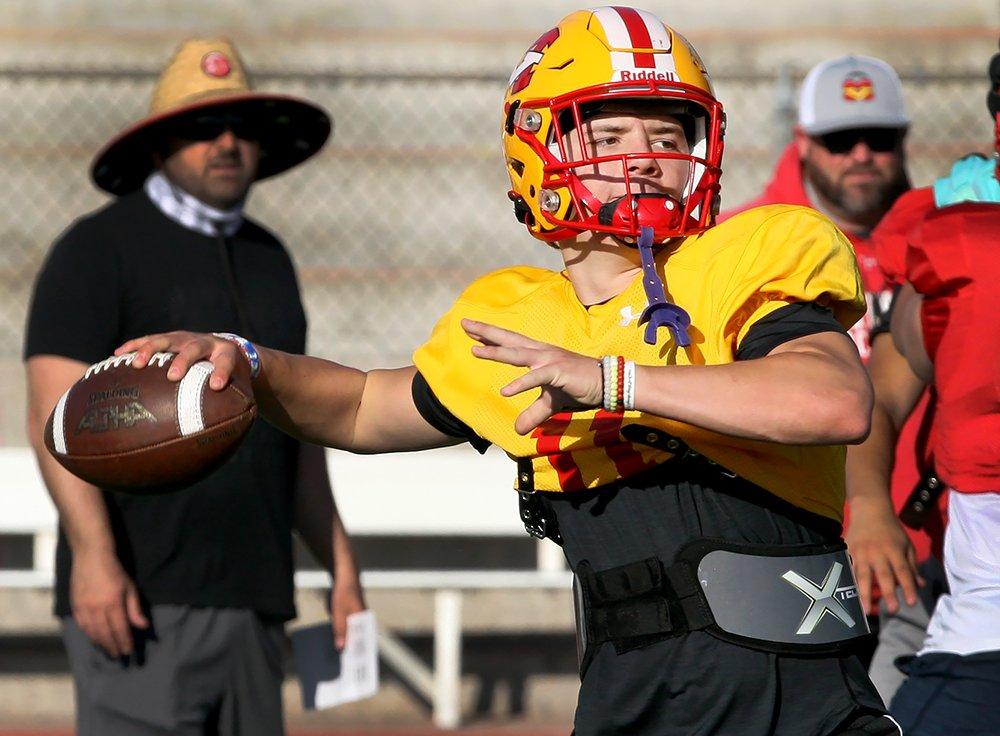 Mission Viejo sophomore quarterback Kadin Semonza steps back to throw a pass as his coaches look on during practice at Mission Viejo High School on Wednesday afternoon. Semonza was given the starting quarterback job after Peter Costelli graduated early and is playing for the University of Utah. (Ryan Kuhn, SOCoPrepSports.com)

And, since, he has made the most of it.

He thrived during the Diablos first two games this season, as he has a combined 525 yards passing with seven touchdowns and just one interception.

“Football is always that ’next-man-up sport’, so I’ve been ready since I’ve stepped onto that field,” said Semonza, who has also completed 71 percent of his passes.

Mission Viejo head coach Chad Johnson’s decision to make Semonza the starting quarterback came after junior Peter Costelli chose to get an early start to his college career by completing his high school graduation requirements early and enrolling with the University of Utah back in January.

Costelli was accomplished, passing for early 2,000 yards and 23 touchdowns last season, but Johnson said he had confidence in the next person to step up.

Mission Viejo’s coaching staff has constantly preached to its players that they are just one play away from being a starter, so the Diablos simply treated Costelli’s departure as if it was a season-ending injury.

“That’s something that can happen in football, and (Kadin) has done just a phenomenal job responding,” Johnson said.

Semonza, who is listed at only 6-feet, showed he could lead an offense as Mission Viejo trounced Oak Hills in the season opener where he was nearly perfect, completing 12-of-14 passes.

“As a sophomore, he is one of the smartest, if not the smartest, quarterback I have ever had,” said Johnson of Semonza “He is way beyond his years.”

Semonza started playing football as a child but wasn’t quarterback.

He started at right tackle, then moved to receiver, cornerback and even kicker.

“Heck, I can still kick if they need me,” Semonza joked.

Semonza started playing quarterback full time for the last five years and, while he has improved his skill every year, the biggest leap came when he moved up from JV last year and took some snaps behind Costelli.

“I really found out how fast varsity football really is,” Semonza said. “These dudes are really stronger, faster and tougher than JV.”

The Diablos overcame an early interception and an early deficit to take down the Highlanders and, despite the mistake, Johnson praised Semonza on his decision making.

“He does a great job distributing the football and, based on what the defense is doing and what call we have on, he knows where to go with the football most of the time,” Johnson said. “That’s saying a lot for a sophomore.”

Semonza continues to gain experience but has become a leader with his teammates especially during this shortened season.

Johnson said his potential will take him as far as he wants to go.

He knows Semonza will play college football, but said the only thing that might prevent him from playing somewhere in a conference like the Pac-12 would be the measurables teams are looking for.

“He has the arm, he has the intelligence and he has the athleticism but, if he doesn’t get any taller, is 6-foot tall enough for the Pac-12?” Johnson said.

Semonza knows he could be called ‘undersized’, but he is confident his ability can take him anywhere he wants to go.