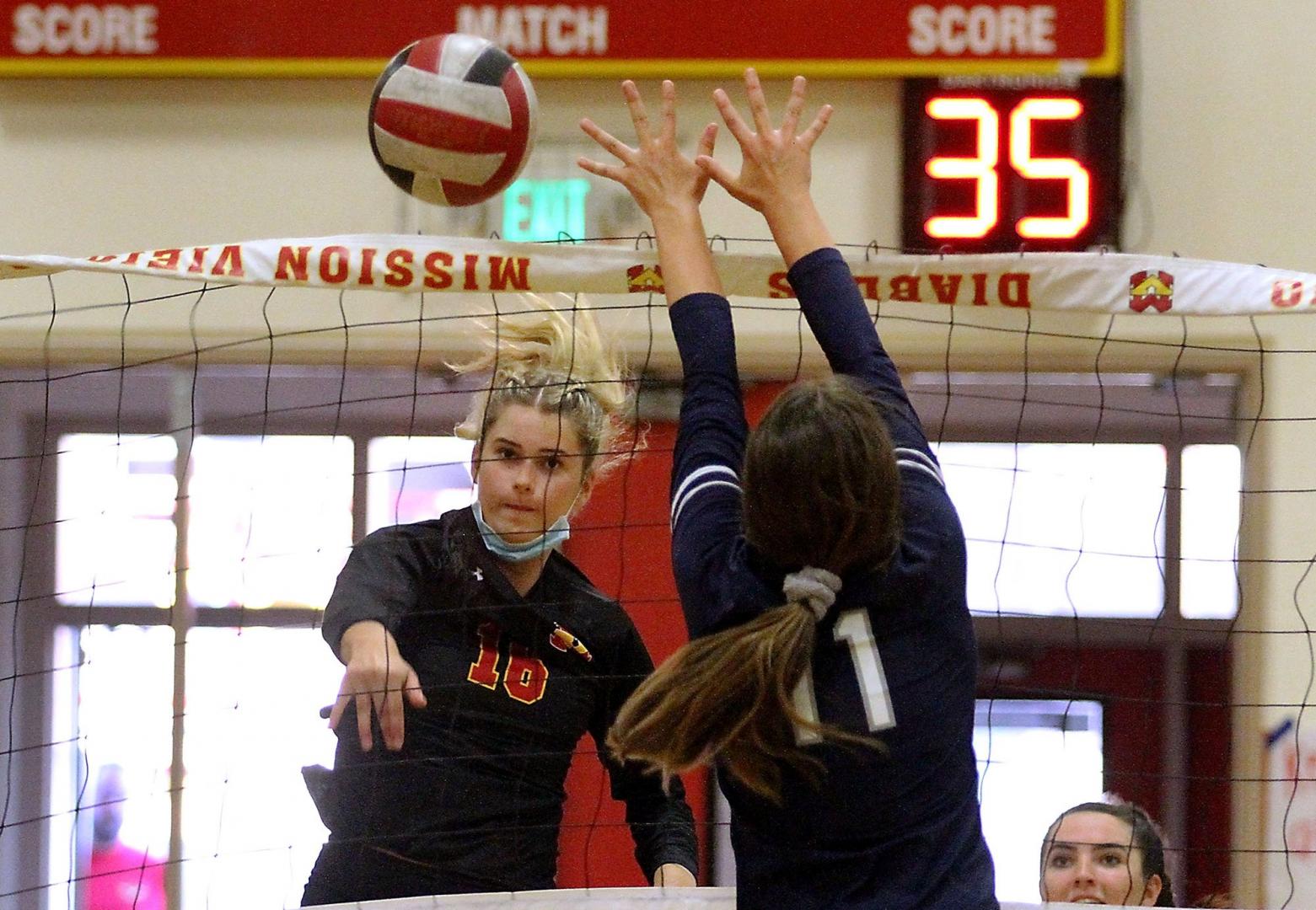 “Rollercoaster,” she said, with a smile.

“I really liked how we kept the pace and didn’t break gap in the middle,” Nicholson said.

Mission Viejo (7-4) went back and forth with Capo Valley Christian throughout the first set.

It wasn’t until senior opposite Sam Lister scored a kill that led to a 5-0 run.

Senior outside hitter Danica Wulf added an ace and the Diablos held a 15-10 lead.

“These seniors have been working so hard,” Nicholson said of her 10 seniors. They just love each other.”

Mission Viejo’s experience showed to be the difference as outside hitter Kaylie Stewart added a pair of kills followed by two more by Wulf.

The Diablos won the first set 25-16 and momentum was clearly on their side.

“Our team chemistry has been so much better than previous years,” Stewart said. “We really want it.”

Capo Valley Christian (7-6) kept with Mission Viejo early on throughout the second set.

But the Diablos’ experience proved to be too much as kills by Stewart, Lister and Chloe Karn gave them a 18-12 lead.

Capo Valley Christian battled back during the set to get within a 22-20 deficit but Mission Viejo held on after a kill by Karn scored game point.

Mission Viejo has had find success in recent years on the volleyball court.

It saw an eight-match improvement between 2018 and 2019, making it to the first round of the CIF-Southern Section Division 3 Tournament.

Marino said each year this senior class has improved and with the pandemic allowing them just three matches last year, now they want to make the best of it.

“These girls learned that life is short,” Nicholson said. “You don’t always get a season.”

Despite the loss, Eagles coach Kelle Bond knows the importance of challenging themselves against bigger schools.

“Most of my players are freshmen and sophomores so to come in here and battle against a team like Mission is so valuable for their improvement,” Bond said.

CVCS continues its season when it travels to Anaheim High on Friday while the Diablos finish up their non-league schedule with home matches next week against Crean Lutheran and San Clemente.