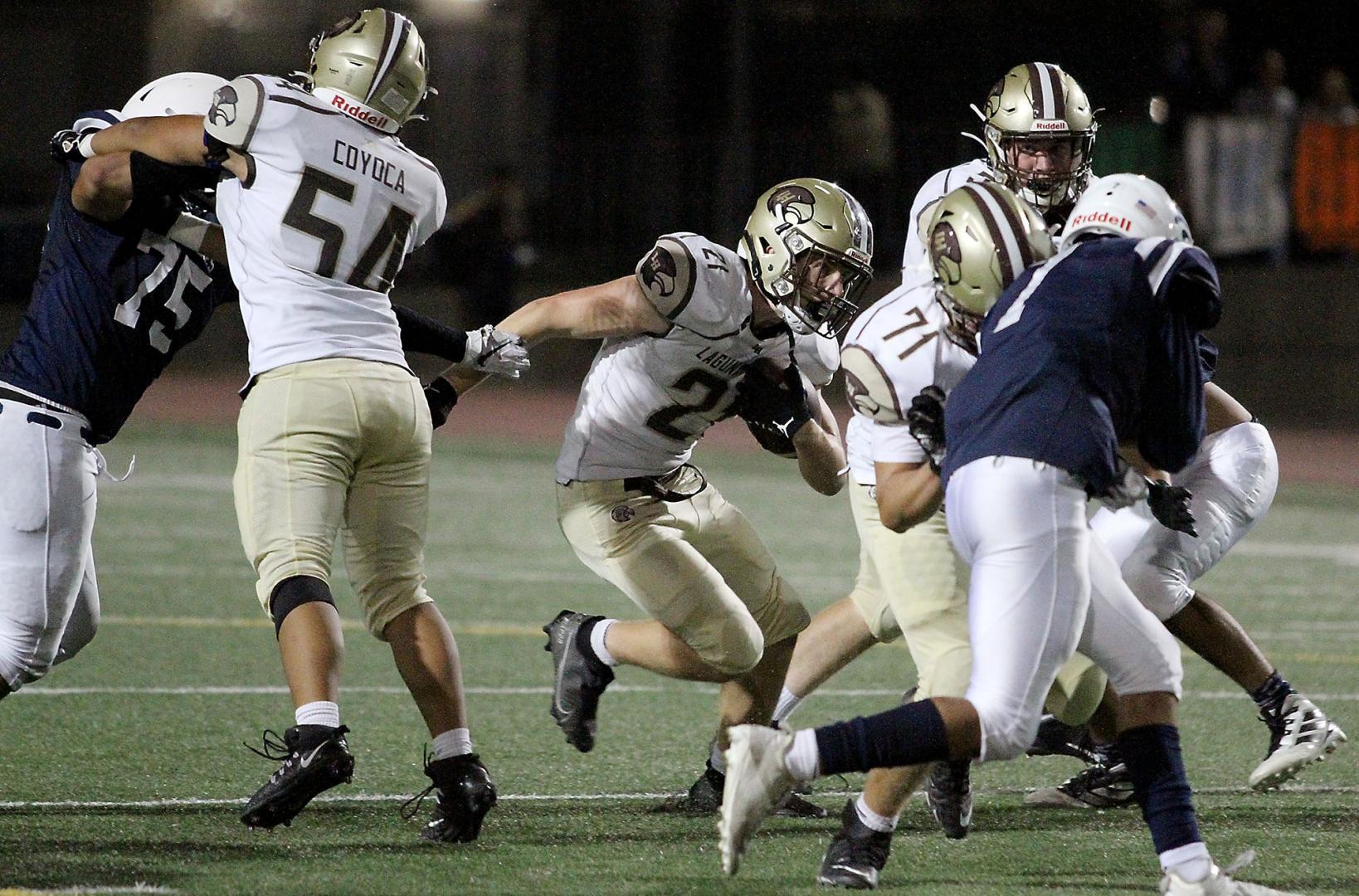 Laguna Hills running back Nick Ferlauto runs through the Northwood defense during a high school football game at Irvine HIgh School, Sept. 16, 2021. Ferlauto finished with 119 rushing yards and a touchdown during a 15-0 win. (Ryan Kuhn, SOCoPrepSports.com

IRVINE — Laguna Hills junior running back Nick Ferlauto knows his number can be called at any time.

So he always has to be ready.

Ferlauto was handed the reins of the Hawks rushing attack on Thursday night after the reigning Pacific Hills League MVP senior Troy Leigber excited early in the first quarter with a shoulder injury.

Farlauto finished with 18 carries for 119 yards and a touchdown as Laguna Hills shut out Northwood 15-0 at Irvine High School.

“We call Nick ‘Hammerhead’ because he is just a physical straight ahead power back,” Laguna Hills coach John Lester said. “This win speaks volumes of how hard we played tonight.”

With Leigber in three back field for only the first few series, the Hawks tried to establish a running game and control the clock.

But neither team could get any offense moving.

Laguna Hills worked its way down to the Northwood 37 yard line but was d=forced to turn the ball over after quarterback Kaden Austin threw an incomplete pass on fourth down.

The Timberwolves also got near the end zone but running back Kaden Carter ’s 2-yard run came up short and gave the ball back to the Hawks.

“In the first half, they were physical and brought it,” Lester said of Northwood. “We struggled to match their bigger size.”

Laguna Hills finally found some momentum with about 40 seconds left in the first half when Austin threw a 30-yard pass to sophomore receiver Reese Burnham and took the lead on a 22-yard field goal.

During the second half the Hawks did nothing but build off of their previous scoring drive.

Ferlauto broke free and ran 23 yards down the sideline to get back into the red zone and then Austin capped the drive off with a 21-yard screen pass to Burnham.

Northwood’s offense could get nothing going and to make things worse, fumbled a punt return that kept Laguna Hills controlling the clock.

All it took was for Ferlauto to complete a 10-yard run up the middle to seal the game.

“I just saw the hole and ran through it,” said Ferlauto, who doubled his season’s total in rushing yards. “No one was there and I scored.”

While Ferlauto propelled the offense, the defense recorded its first shut out since it defeated Garden Grove in 2019.

Following the win, Lester didn’t say how serious Leigber’s injury was but he said he was taken out and will be looked at as a precaution.