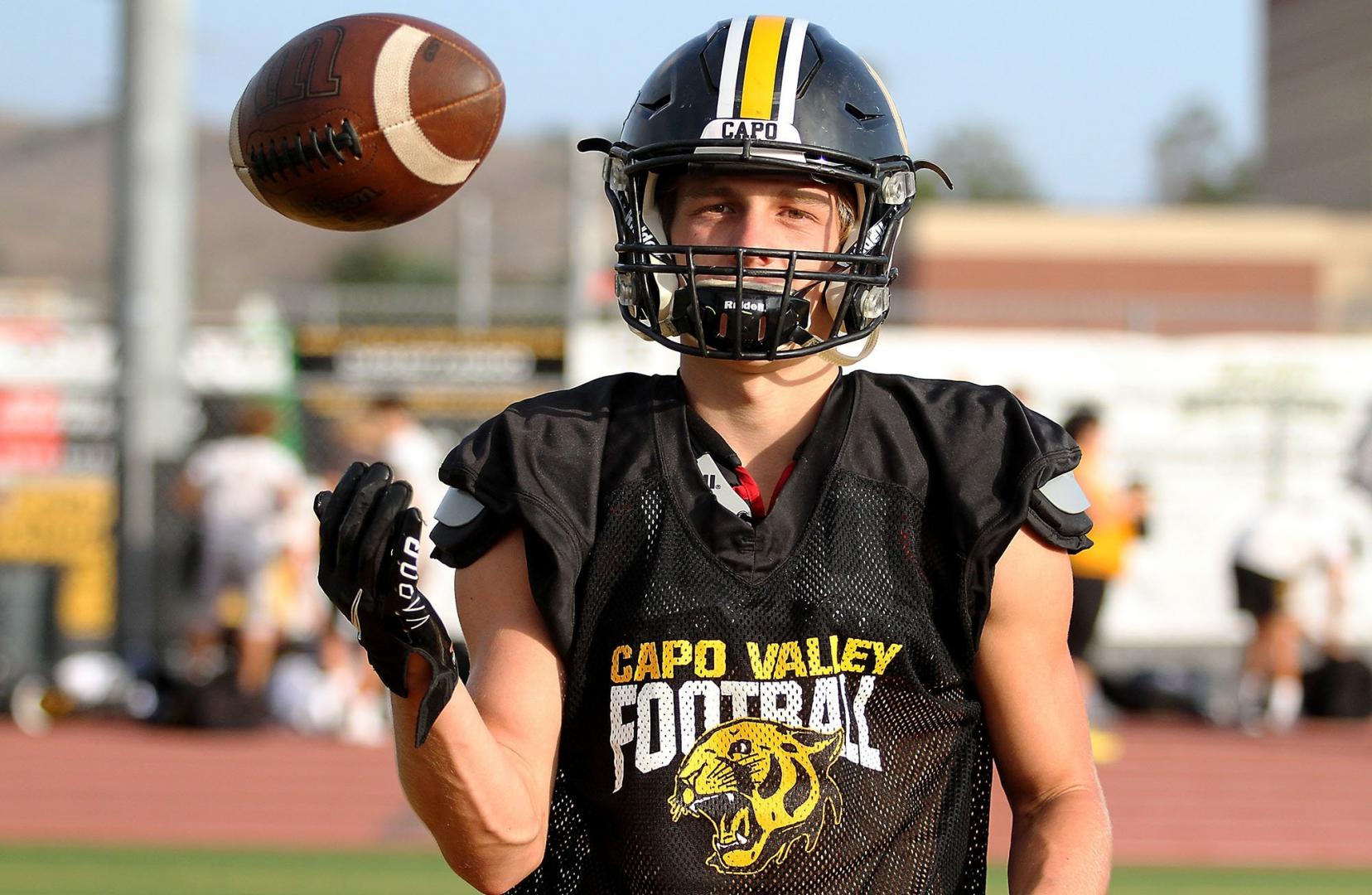 MISSION VIEJO — When Capo Valley wide receiver Owen Taylor was a sophomore, it seemed like he was doing it all for his junior varsity team.

“He was on offense, defense and even returning kicks,” Capo Valley head coach Sean Curtis said.

“There was this one game where it was super hot outside, probably like 99 degrees, and (Owen) ends up getting some pretty serious heat illness where we had to call the ambulance and fire truck.”

Taylor ended up being fine that day and, after a quick breather and getting checked out, he quickly returned to his coach.

HIs coach just smiled and told him to take a seat.

“A lot of kids don’t have that love or passion for the , especially at the JV level,” Curtis said. “Owen is different. He wants to be out there and he wants to make the big play.”

Fast forward two years, Taylor is now writing his legacy on Capo Valley’s varsity team. His 276 receiving yards over two games not only leads the team, but also ranks No. 14 in all of California.

“His patience has paid off,” Curtis said. “You see all the time if players aren’t starting as a sophomore they are looking around where to transfer, but Owen was never like that. He believes in the process here.”

Taylor grew up watching and loving football. But he wasn’t always a wide receiver.

“The funny thing is that I was a quarterback,” Taylor said. “During my freshman year of high school, they moved me to wide receiver.”

The transition was because his good friend Jackson Wear beat him out at the quarterback spot so, he figured, why not learn how to catch? After all, he did love watching NFL wide receiver DeAndre Hopkins.

“I mean, I had to learn the technique, but it kind of came naturally,” Taylor said.

While honing his craft as a wide receiver at the JV level, he learned two things. He started catching touchdown passes that increased his confidence and brought a sense of fun to the field while waiting his turn.

“He’s a free spirit,” Curtis said. “If the other team talks trash, he isn’t going to take it seriously. You just need a guy like that who will look at adversity and laugh.”

He caught four passes for 78 yards against San Clemente in his first varsity start during the pandemic season this past spring. One week later, against San Juan Hills, he finished with 123 yards receiving, including his first two touchdown passes.

“We are really trying to develop players down at the JV level. Owen is a perfect example of that,” Curtis said. “It’s an opportunity to get reps. You are only going to get better at playing football by playing football.”

Taylor isn’t taking any of the time he has left at Capo Valley for granted.

He’s already established himself as a top choice for quarterback Trey Kukuk to throw to.

Both of his 100-plus receiving games against Tustin and Sunny Hills will tell you that.

“I trust him to make a play with the ball every time,” Kukuk said. “You can’t ask for more than that.”

Taylor doesn’t know where he is going to end up to play at the next level. He said he has an offer from Benedictine University, an NAIA school out of Kansas, but he hopes more will come.

“I love this sport; I just want to see where it takes me,” Taylor said.

Regardless of where he ends up next year, he knows that his patience has paid off, as he is now established as a top wide receiver at Capo Valley High School.