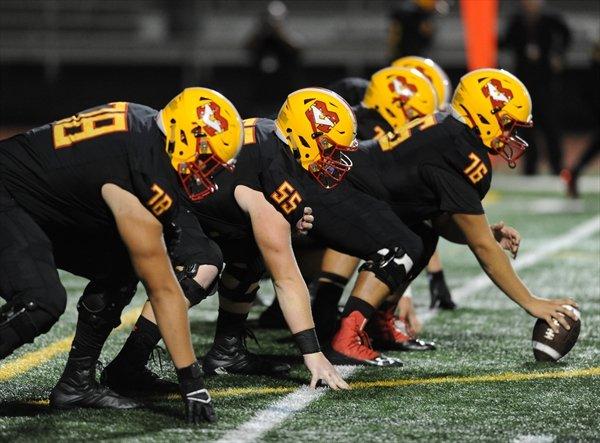 Mission Viejo football was forced to cancel its first game against La Habra on Friday night after one or more players tested positive for COVID-19. ( Ming Chung Lin, MaxPreps.com)

Mission Viejo’s first football game of the season was cancelled on Friday after one or more student-athletes tested positive for the coronavirus, Mission Viejo Principal Tricia Osborne said in a letter she released on the school’s website.

The Diablos were set to face La Habra in a rematch from last season.

“This was a very difficult decision to make and extremely disappointing for our student-athletes and families, but it is our responsibility to keep our students and coaches safe,” Osborne wrote.

Mission Viejo, who is part of the Saddleback Valley Unified School District, tested their players for the virus on Tuesday in preparation for Thursday and Friday’s games.

The California Department of Public Health required that all student-athletes were to be tested on a weekly basis if the county case rate is between 14 and 7 per 100,000 individuals.

While the cases dropped below 7 per 100,000 individuals Osborne’s letter said because the athletes were already in the process of testing, we allowed the process to be completed.

High School football has been delayed seven months because of the pandemic and because of a shortened season will not be made up.

HUNTINGTON BEACH — Trabuco Hills’ football team probably didn’t imagine its season starting off the way it did against Edison.

The Chargers (1-0) didn’t waste any time scoring in the first 21 seconds as it defeated the Mustangs 55-7 at Huntington Beach High School.

Not even before the first quarter ended Edison led by four touchdowns behind its quarterback, Braeden Boyles.

Boyles, who will play for NAIA Benedictine College in the fall, finished the game throwing 7-of-9 passes for 139 yards and four touchdowns.

Trabuco Hills’ only offense came in the second quarter when running back Mack Healy scored on a touchdown run.

Trabuco Hills (0-1) continues its season on March 19 when it travels to Mission Viejo.