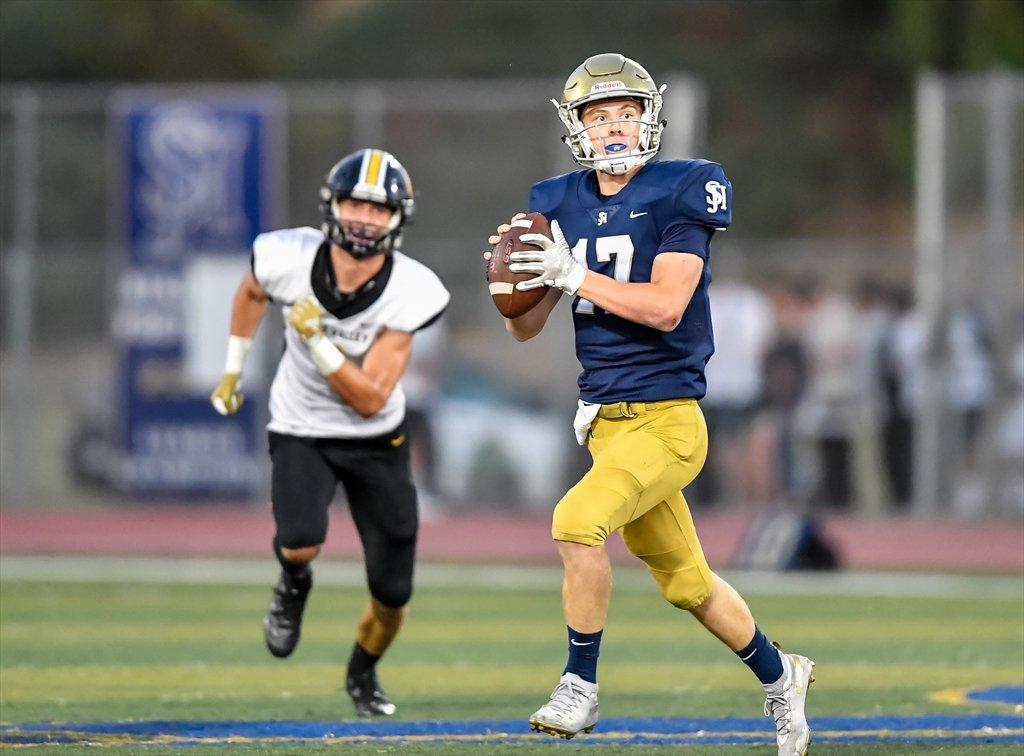 The Badlands were packed with fans as the Stallions were facing non-conference rival Tesoro.

Then he heard his coach tell him to start warming up.

“The other quarterbacks weren’t doing anything for us, so I sent him in and, all of a sudden, he immediately threw a 40-yard completion over the top,” Stallions head coach Rob Frith said.

Who was this kid wearing number 28 playing quarterback?

Jones finished the game covering 10-of-14 passes for 163 yards and what would ultimately be the game-winning touchdown pass to Joey Hobert.

The seniors put Jones on their shoulders and paraded him around the field as the crowd chanted his name.

“I just couldn’t imagine being a sophomore and my teammates lifting me up like that,” Frith said. “I would have died and gone to Heaven.”

There hasn’t been competitive football since December 2019 because of the coronavirus pandemic.

Jones knows there are still pages of his story yet to be written, but he has already made his mark at San Juan Hills.

Most quarterbacks start at a young age. The only problem for Jones was that he was too short.

“I had to play wide receiver for a couple years before I grew into my body,” Jones said.

His first action as a quarterback came during his freshman year at El Toro. He split time and completed for the starting job on the freshman team, but Jones said deep down he wishes he would have had more experience.

After transferring to San Juan Hills the following season, it wasn’t long before he was given the golden opportunity to move up to varsity.

“I was just inexperienced,” Jones said.

“I give a lot of credit to my offensive coordinator,” Jones said. “He simplified the game for me and I just became comfortable in the pocket.”

San Juan Hills rode that wave of momentum into next season, but its young quarterback was still maturing. Following two straight road losses to Edison and Tesoro, coaches let Jones know there could be a chance that he would split time with backup quarterback Dashiel Ross.

That next Friday against Great Oak, Jones could be not be stopped. He finished with 181 yards and four touchdowns, one of which came off of a 74-yard strike to Henry Vangelos.

“I knew I really had to up my game,” Jones said.

San Juan Hills cruised to its second straight league title and Jones’ accuracy was noticeable. He concluded his junior season by converting 71 percent of his passes and, at one point during a four game stretch against Trabuco Hills, Aliso Niguel, Dana Hills and Laguna Hills, he converted 51 of his 61 passes (83.6 percent).

“We throw the ball a lot at practice and the repetition is important,” Frith said. We use a lot of fundamentals of an air raid offense. (Hudson) knows what he is looking for and can change with what the defense is giving him.”

The Stallions won the school’s first CIF-SS Division 4 championship that November, but as much as Jones did to guide them there, he was also able to sit back and enjoy the school’s historic accomplishment.

“It was pretty awesome but it was all my teammates. I really didn’t do anything,” Jones said chuckling. “I think I threw for like 50 yards or something.”

It was actually 47 yards, but who is counting? He still finished his junior season with 2,599 passing yards, 33 touchdowns and just five interceptions.

Jones knows his senior year hasn’t been typical for a high school quarterback.

He sits patiently and waits for the state health officials to decide whether or not there will be a season.

But he also knows his career isn’t over.

Jones wants to continue his career at the college level and, though he has some offers from NAIA schools in Florida, Nebraska and Kansas, he hasn’t had the chance to throw for any NCAA schools in person.

“I’m just thinking about what I can control, and that’s getting bigger and stronger,” Jones said. “I was a lot smaller last year, but I’ve grown a lot. I’m just waiting for them to take a shot on me.”

No matter what happens in the upcoming months, Jones knows how far he has traveled. He started as a young sophomore celebrating on the shoulders of his teammates after a win against Tesoro and has now helped the school win its first CIF-SS Division 4 Championship.