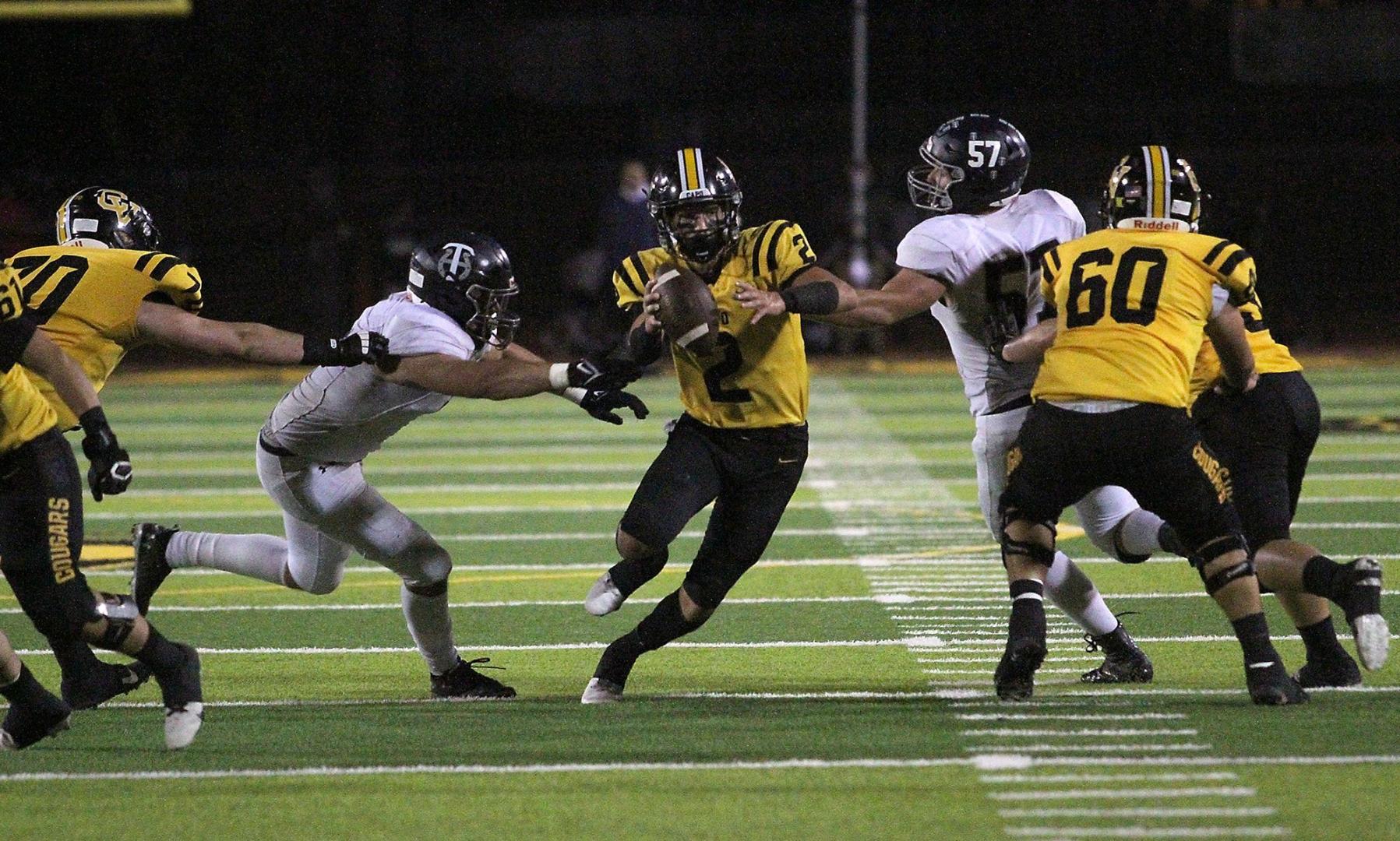 It could have been the last time the seniors had to play on that field.

“This is going to be the game you are going to tell everyone about,” Curtis said.

All eyes were fixated on the Cougars junior quarterback Trey Kukuk. He finished with 611 passing yards, six touchdowns and orchestrated the game-winning drive.

With 12 seconds left, Kukuk threw a 30-yard pass to Dane Benedix, who muscled his way over the goal line.

“This is what we needed,” Curtis said. “We have really been going through the gauntlet through this whole season. We have battled adversity with guys in and guys out. We are a family and through it all; we never gave up.”

It didn’t take long for both offenses to start the back-and-forth shootout.

Capo Valley came back on their next possesion as Kukuk found Mark Hopkins on a 24-yard touchdown pass, but the celebration didn’t last long.

Trabuco Hills answered on the following possession with another Barrett touchdown to regain the lead.

Barrett has been the Mustangs’ legs all season. His 218 yards on 24 carries and five touchdowns would have been the talk of the town.

But instead, it was Capo Valley’s night.

Barrett would have to wait.

Trabuco Hills ended the half with some momentum. Quarterback Will Burns, who transferred from Mission Viejo this past summer, threw an 18-yard touchdown pass to Troy Riley.

Before too long, Burns added two more touchdown runs to take Trabuco Hills into halftime with a 35-24 lead.

Capo Valley needed to find an answer. Their playoff hopes were riding on it.

“We tell our players in league that every game is a must win,” Curtis said. “You never know what is going to happen.”

At the start of the second half, Capo Valley crept closer when Kukuk found Hopkins for his second touchdown reception of the game.

The Cougars finally regained the lead early in the fourth quarter when Kukuk found Owen Taylor for another touchdown pass.

Kukuk’s performance was just two yards shy of the Orange County record for most passing yards by a single player set by El Toro’s Connor Manning in 2012 but, regardless of his numbers, he loves playing in this offense.

“Throwing to all of these receivers is just amazing,” Kukuk said. “I’m super proud of my guys.”

While Capo Valley was cruising, so was Trabuco Hills, led by Barrett.

He first completed a 37-yard scamper into the back of the end zone. Then he scored on a 71-yard touchdown run, hurdling over defenders and tiptoeing down his team’s sidelines.

Capo Valley needed an answer and Benedix emerged when he was needed most.

He had already entered the night having put up gaudy numbers in games his season.

He finished with 297 receiving yards against Orange High School about a month ago.

His first touchdown reception tonight came with 5:47 remaining in the game.

We all know what happened on his second.

After Barrett scored their final touchdown with 58 seconds left, the pair of Kukuk and Benedix came together for one last drive.

Their first connection got the Cougars into Trabuco Hills territory. Their second connection won the game.

“Once I caught that ball, I knew nothing was stopping me,” said Benedix, who ended the night with 16 catches for 259 yards. “I had to get into the end zone.”

Capo Valley will wrap up its regular season on the road against Aliso Niguel.

A win and an El Toro loss to Trabuco Hills would put all three teams in a tie for the Sea View League title.