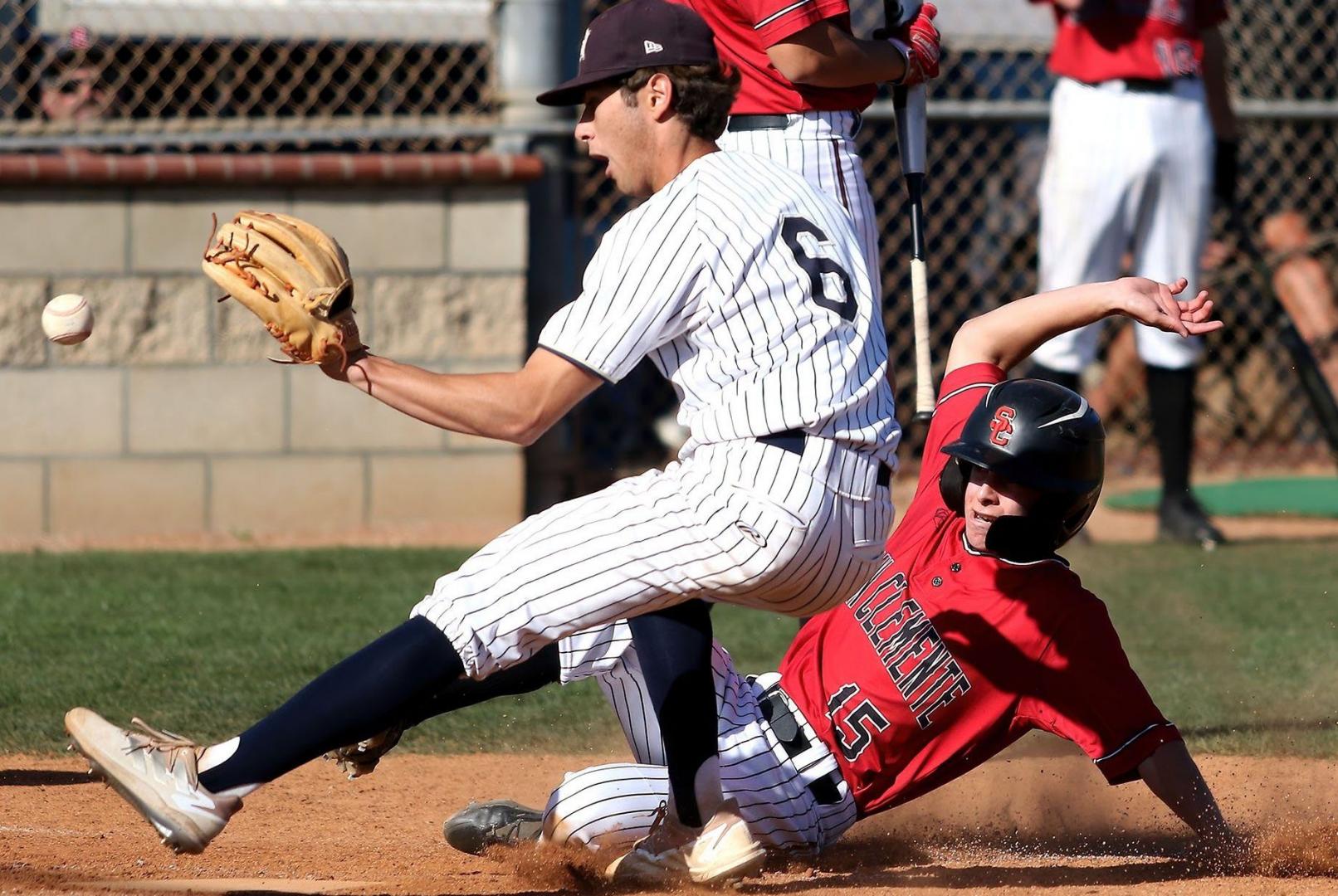 The Tritons lost both of their games to San Juan Hills on Monday and Wednesday and is currently fighting for a playoff berth.

But their fortunes changed with a 6-1 victory over the Stallions on Friday.

The win not only avoids a sweep but puts them a game ahead of San Juan Hills of second place in the Sea View League. The top two teams automatically qualify for the playoffs.

“I told them, this is all you need to do,” San Clemente coach Dave Gellatly said. “They played as a team. (They) bought in and they were aggressive.”

“If we can come out with the energy we came out with today we are going to be okay,” Gellatly said with a smile.

While the offense gave the Tritons the lead, the pitching helped them keep it.

Senior starter Kaden Giles retired the first eight batters before allowing a walk to Jackson McKay. He had a no-hitter through 4 2/3 innings but didn’t realize it.

“That wasn’t a big deal to be. The win is what matters,” Giles said.

The Stallions put together a rally in the fourth inning with Zach Doyle lining a RBI-double to right field, but their momentum didn’t last long.

San Clemente answered with a double of its own by Rhyn Chambers and wouldn’t look back.

Josh Egner came around to score on a wild pitch in the 6th inning and then Pierce Brown lined a 2-RBI single in the top of the seventh to put the game out of reach.

Meanwhile Giles kept rolling as he worked out of jams in the fifth and sixth innings with runners on first and third.

He proved why Gellatly calls him a workhouse allowing just the one earned run, four hits and striking out four batters on 102 pitches. On the season he has logged 38 1/3 innings and holds a 1.46 ERA.

“I felt great about it,” Giles said of his start. “My fastball, cutter was my main go-to today. It was working.”

San Juan Hills attempted a rally with Jason Fritz getting on base in the bottom of the seventh inning but nothing came of it.

“We came out flat the first two games but today we came out with a little bit of life which is what we need if we are going to have a chance to make the playoffs,” Gellatly said. “Hopefully this will be the game that sets the tone for the rest of the season.”

The Tritons will now eye a three game series against Trabuco Hills, sitting two and a half games behind. A sweep will put them in first place.

“That’s what we play for isn’t it?” Giles said. “We are just going to go out there and worry about each game in hand.”