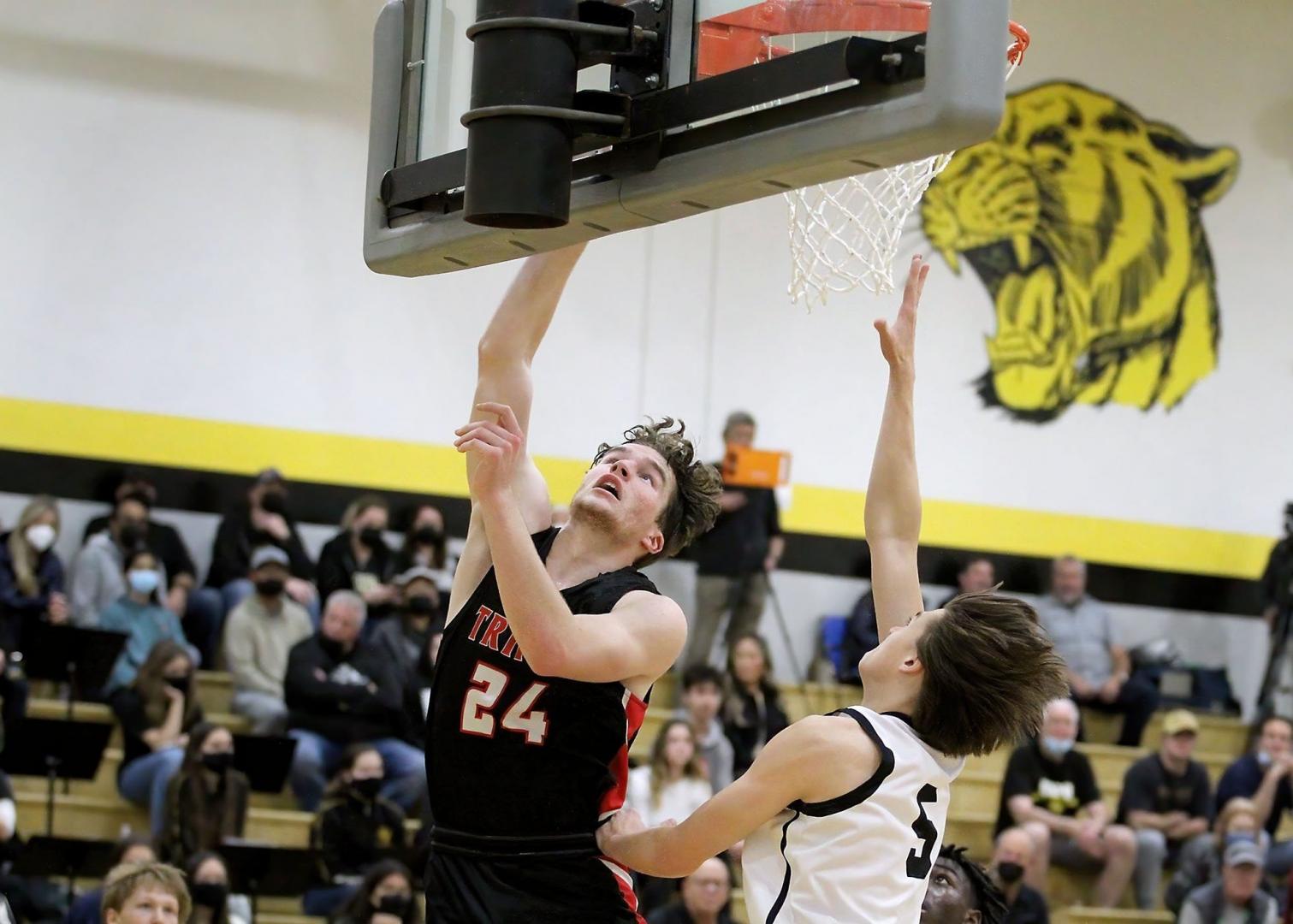 MISSION VIEJO— With plenty of emotion in the air, the Capo Valley and San Clemente’s boys basketball teams were both fighting to keep their seasons alive.

A win for Capo Valley could have entailed a three-way tie for second place, but a win for San Clemente would solidify complete separation in the standings, and guarantee a playoff spot.

Despite battling a raucous crowd on senior night, San Clemente closed out Capo Valley 54-37 on Thursday, not only earning a CIF-Southern Section Division 1 drawing, but simultaneously eliminating the Cougars from playoff contention.

“It was a great win for us,” Tritons coach Marc Popovich said. “It’s a good momentum builder for us going into the playoffs. I am really, really proud of them.”

The win did not come easy by any means, especially given playoff implications hanging in the balance for both programs.

On the opening play of the game, Davis intercepted a pass in the lane, drove down court, and layed in the first points of the contest. Then, on successive offensive possessions, he hit a contested midrange jumper, and followed that up with a 3-pointer from the wing. In his final high school game, Davis finished with a game-high 21 points.

“It was tough,” Davis said afterwards. “I came here to win and play with good people. I’m just sad it ended like this, but we had a good run.”

The transfer from Saddleback Valley Christian kept the Cougars offense rolling, as Capo Valley enjoyed a 17-10 lead at the end of one quarter.

The Tritons, also competing for playoff prowess, overcame the Cougars’ lead in the second frame. A last-minute 3-pointer from senior guard Charlie Spaeth put San Clemente up for good, 22-19 being the score at half.

There was a clear mismatch in size between the Tritons and the Cougars, an advantage that was exploited by San Clemente forwards; 6-foot-7 Asher Gardiner and 6-foot-5 Tanner Mehren. The frontcourt duo combined for 26 points, exclusively from inside the paint and on the free throw line.

“We have an advantage with our bigs,” Popovich said. “A lot of teams have only one big and not two, so we trust those guys to go in there, make good decisions, and finish their shots. They were great out there.”

At the end of three quarters, San Clemente led 40-27, and was simply scoring more efficiently than Capo Valley down the stretch.

The Cougars tried to mount a comeback by implementing a full-court press and launching up 3-pointers, but it was no use.

Gardiner spearheaded the winning effort with 17 points, while providing an unignorable presence in the paint — on both sides of the floor.

Before the game, the Cougars honored 14 senior basketball players.

“I absolutely adore the group of kids that I have,” said Capo Valley head coach Brian Mulligan. “They’re just fantastic, and they do all of this stuff together, then all of the sudden, it has to die on a night like this. I tried to tell them that this is lifelong stuff.”

Mulligan spoke before the game about how a few players on the Capo Valley varsity team were a part of his junior programs that dated some of the players as young as four years old. He called them “little cats.”

As for San Clemente, its seniors will have a chance to compete for high school basketball glory in the coming weeks. On Feb. 7, the Tritons will find out what team they will be facing.

Last season, the Tritons fell to Agoura High School in the second round of the CIF-SS Division 2A Championships.

“I think we can make some noise in the playoffs,” said San Clemente forward Asher Gardiner. “We’ve been picking it up the last couple weeks, and getting better and better.”