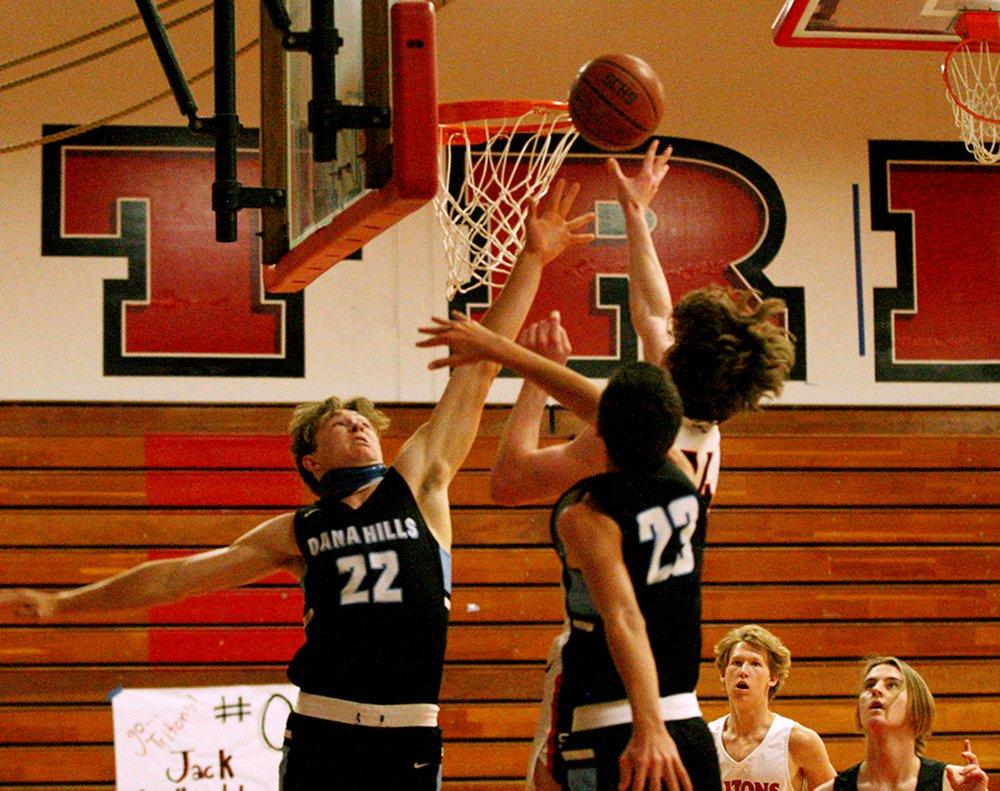 Especially the seniors, who played in front of their home crowd for the first time.

So, when they took the court against longtime rival Dana Hills, they made the most of it.

The scoring duo of seniors Tyler Nemeth and Asher Gardiner scored a combined 28 points as the Tritons defeated the Dolphins 66-60.

“They did a good job tonight,” Tritons coach Marc Popovich said of Nemeth and Gardiner. “Tyler is just so unselfish and knows when to shoot and Asher is just a presence down low.”

Nemeth kickstarted San Clemente’s offense with a pair of threes and a put back he scored from gaining his own rebound.

Gardiner got involved late in the quarter with a couple of scores inside and Tritons held a 23-20 lead after the first quarter.

“I use my strength to overpower people. I guess you could say I’m an old school big,” Gardiner said.

Offense was hard to come by in the second quarter as Wade Desco hit a 3-pointer, but the Dolphins were held to just one field goal over the span of almost six minutes.

Dana Hills entered the game with some lack of varsity experience as head coach Tom Desiano said almost everybody on the team is a new face.

“I didn’t know what to expect coming in,” Desiano said. “We do have some returners but they didn’t play a whole lot last year.”

One player who returned was junior guard Griffin Haugh.

Despite playing limited minutes as a sophomore, Haugh worked on his shooting in the offseason and lit a fire for the Dolphins.

He finished with 23 points including four 3-pointers.

“I’ve been working on getting my shot off quicker off the screens,” Haugh said. “I’m just having fun out there.”

San Clemente increased its lead to as many as eight points in the third quarter but after Haugh’s third 3-pointers the Dolphins were looking up at just a 45-39 deficit with eight minutes left in the game.

Haugh’s hot shooting continued in the fourth quarter when he hit a step back 3-pointer to cut the deficit down to 51-50 and on the next possession hit another 3-pointer to give Dana Hills its first lead since the opening moments of the game.

“We just had to find a way to score,” Popovich said.

San Clemente answered its coach’s request as Jack Carroll hit another 3-pointer and, after a few more buckets by Nemeth, the Tritons were in command.

The Dolphins had opportunities to cut into the lead within the final 30 seconds, but Haugh’s shots came up short.

“My favorite thing was holding them scoreless in the final minute,” Popovich said. “We had great possessions and we played great defense.”

San Clemente will take its momentum into another home game on Friday when it hosts Aliso Niguel, and with the seniors’ riding that final wave together, they want to make it last.

“It’s been a long year, but we have worked really hard to get here,” Nemeth said. “I’m just grateful I get to play my final season.”