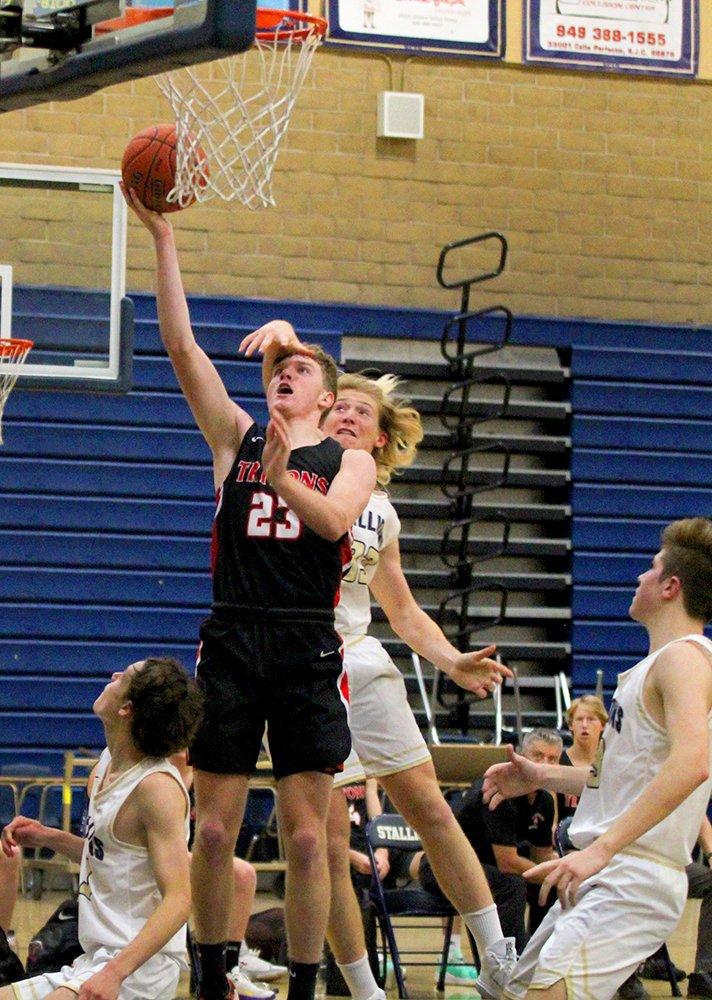 San Clemente seinor forward Jack Carroll goes up for a layup during a high school basketball game between San Juan Hills and San Clemente on Wednesday, May 5, 2021 in San Juan Capistrano. The Tritons won the game 67-53. (Ryan Kuhn, SOCoPrepSports.com)

But, on Wednesday night, its focus was solely on San Juan Hills.

San Clemente senior forward Jack Carroll led all scorers with 19 points as the Tritons left the Woodlands with a 67-53 win.

While the team is now anxious for their next matchup, coach Marc Popovich said he was happy with how his team responded to the 10-0 run the Stallions put together in the third quarter.

“We took their punch and we figured out a way to counter and finish with some solid play,” Popovich said.

The Stallions found an answer for San Clemente to start the game.

Tritons’ Cameron Kooper hit a 3-pointer, followed by another one from Carroll, but San Juan Hills stuck with them for the majority of the first quarter.

Finally, a three-point play from post Noa Serpa, and a second 3-pointer by Carroll, gave them an 18-12 lead after eight minutes.

But the Stallions are no strangers to adversity.

After a season-opening win against Segerstrom about a month ago, San Juan Hills was forced to quarantine for two weeks after someone within the program tested positive for COVID-19.

“We had some Zoom meetings, and I gave the players individual assignments, but it was tough,” Stallions coach Jason Efstathiou said.

The Stallions were held to just six points in the second quarter and watched their deficit grow to 32-18 at halftime.

“Not having them in the game really affected us in terms of taking shots,” Efstathiou said.

San Juan Hills created some momentum in the second half by seeing results from its full-court trap and some shots from senior guard Phillip De Gree.

De Gree scored six straight points that brought the deficit to as close as six points with four minutes remaining in the quarter.

Popovich just watched and let his team dig themselves out of the hole.

Carroll hit a 3-pointer to stop the run and the Tritons never let the lead slip below seven points for the remainder of the game.

“I don’t really want to come in and take timeouts in a situation like that,” Popovich said. “It was really nice to see the team respond.”

San Juan Hills tried to keep the fight going with De Gree continuing to score as he finished with 12 points, but the Tritons always had an answer, whether it was some putbacks by Tanner Mehrens, Serpa or one of five 3-pointers from Carroll.

“I’ve always been a shooter. It’s always been my game,” said Carroll, who will be playing basketball at Santiago Canyon College next year. “Now, I’m learning to expand off of that.”

Carroll knows his team’s next opportunity will be a chance at redemption.

But what is next for the Stallions?

Efstathiou met with his team outside following the loss and his message was simple.

“This was a tough challenge where at times we overcame, but we need to be more consistent,” Efstathiou said.

The Chargers have just one win this season after defeating Portola this past Monday.