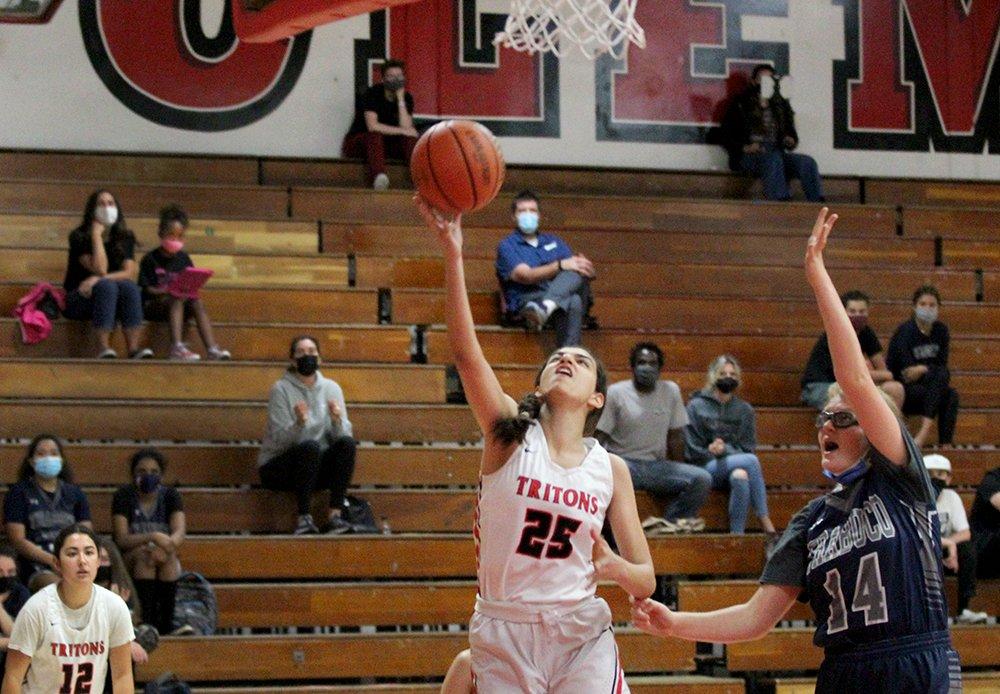 Now, she is teaching her brand of basketball to the younger generation.

The Tritons’ up-tempo offense and full-court pressure defense stifled Trabuco Hills as they outscored the Mustangs 25-2 in the second quarter and ultimately won 70-32 on Thursday night.

“It was a great win,” Husbands said. “Trabuco (Hills) is always tough.”

However, San Clemente didn’t get off to as fast a start as its coach hoped.

It took three minutes past before Triton junior Anita Fereidooni scored the first points of the game.

The Mustangs kept the game close for a quarter as sophomore Annabel Dorz scored five points but still trailed 10-9 after the first quarter.

San Clemente turned up the intensity in the second quarter.

Fereidooni put in a three-point play on the opening possession followed by scores by senior guard Julie Wright and freshman Zona Miller.

Fereidooni scored three more buckets inside to complete a 19-0 run and, afterwards, said her height gave her the advantage.

“I was getting inside and grabbing rebounds for putbacks,” said Fereidooni, who finished with a game-high 16 points.

Trabuco Hills finally scored with two minutes remaining in the first half when sophomore Denali Harps scored inside, but the Mustangs couldn’t find any momentum as the Tritons full-court pressure was just too much.

The Tritons finished with 29 wins last season before losing in the CIF State Regional Finals to Santa Monica. They graduated five players including captains Esther Mafouta and Ella Gardiner.

“You just have to have a lot of communication with them,” Husbands said about her young players. “But they are so eager and there is some talent out there.”

San Clemente kept on its up-tempo style throughout the second half, but Husbands joked it’s the only way she knows how to play.

“We played this style when I played at Cal and I’ve always coached like this,” Husbands said.

The Tritons got their younger players involved during the second half, as freshman center Sienna Taus chipped in four points in the third quarter and freshman guard Claire Pham scored six points off fast-break layups with only minutes remaining in the game.

It was San Clemente’s first win of the season after two consecutive losses to open the season to Carlsbad and Rosary Academy, and Husbands knows there is still plenty of work to be done.

San Clemente continues its season on Tuesday to face Troy, while Trabuco Hills returns home on Monday to face Valencia.