Bohls finished with 177 yards rushing and 3 TDs as the Tritons defeated the Stallions, 35-7 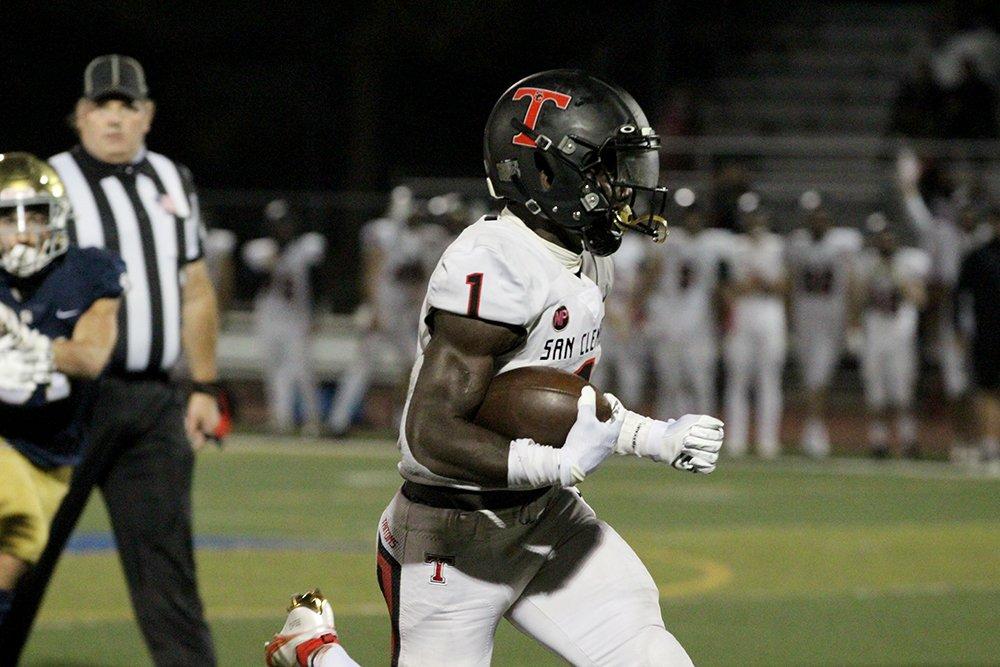 San Clemente running back James Bohls runs by the San Juan Hills defense for his third touchdown during a high school football game at the Badlands on Friday. The Tritons won 35-7.

Instead, he ran through it.

The San Clemente senior running back finished with a career night as he rushed for 177 yards and three touchdowns and led the Tritons past San Juan Hills to open South Coast League play.

“Tonight, I wanted to show Coach Ortiz and show everyone why I’m not ready to go to college just yet,” Bohls said. “I still have work to do (at San Clemente). We want to win league.”

He helped the Tritons march down the field on their opening possession that finished with quarterback Lachlan van Rosmalen finding senior wide out Bentley Redden for a 25-yard touchdown pass.

San Clemente kept with its ground attack as Bohls found some room for a 32-yard run that set up a 9-yard touchdown score two plays later.

While Bohls has made an impact during the first three weeks of the season, he didn’t start playing football until his freshman season.

“Coach Ortiz had faith in me,” Bohls said. “I have always believed in him, I trust him and will continue trusting him, because he is the best coach I have ever had in my life.”

The Tritons continued to run the football and, soon enough, Bohls scored again.

His 19-yard run to the end zone was not only his second touchdown of the game, but it also put his team ahead 21-0 heading into halftime.

“My offensive line was doing an amazing job opening up holes for me,” Bohls said. “They did their jobs, and all I had to do was get into the endzone.”

Bohls will extend his career when he plays for the University of Arizona next fall, but he always keeps a piece of San Clemente close to him.

His mentor and long-time Triton coach Joe Wood passed away in February following a battle with COVID-19. Before every game, Bohls writes the initials “JW” on the tape he wears on his wrists to remind himself that his coach will always be with him.

“Coach Wood would have been proud of me,” Bohls said, fighting back the tears. “He taught me to run 100 percent, don’t fumble the ball.”

While Bohls had success running the ball, the Stallions used the same strategy.

San Juan Hills entered the contest averaging 50 points per game, but some nagging injuries to two wide receivers forced the Stallions to keep the ball on the ground.

The combination of Brayden Burnes and Nathan Grande combined for 95 yards on 31 carries, but the Tritons defense proved to be too much. The Stallions scored in the third quarter, when Hudson Jones found Dashiel Ross for a 5-yard touchdown pass, but Jones was also constantly being pressured by the defense and was sacked six times.

“I have a tremendous amount of respect for that football team,” San Juan Hills coach Rob Frith said about San Clemente. “Those players came to play.”

The Tritons added another rushing touchdown in the the third quarter by Ashton Whitsett and, with three minutes left in the game, Bohls found the end zone for a third time when he sprinted past the defense from 45 yards out.

“He is just a tough-nosed hard kid,” San Clemente coach Janie Ortiz said of Bohls. “When you have that size and that speed with the tenacity he has, he is a very explosive player.”

Bohls never has come close to 177 yards since putting on a Triton uniform, but he proved in the “Battle of La Plata” how capable he is.

And, no matter how winded or tired he is after a performance like he had in the Badlands, he knows exactly who to dedicate that performance to.

“I love you Coach Wood,” Bohls said, looking up at the sky.