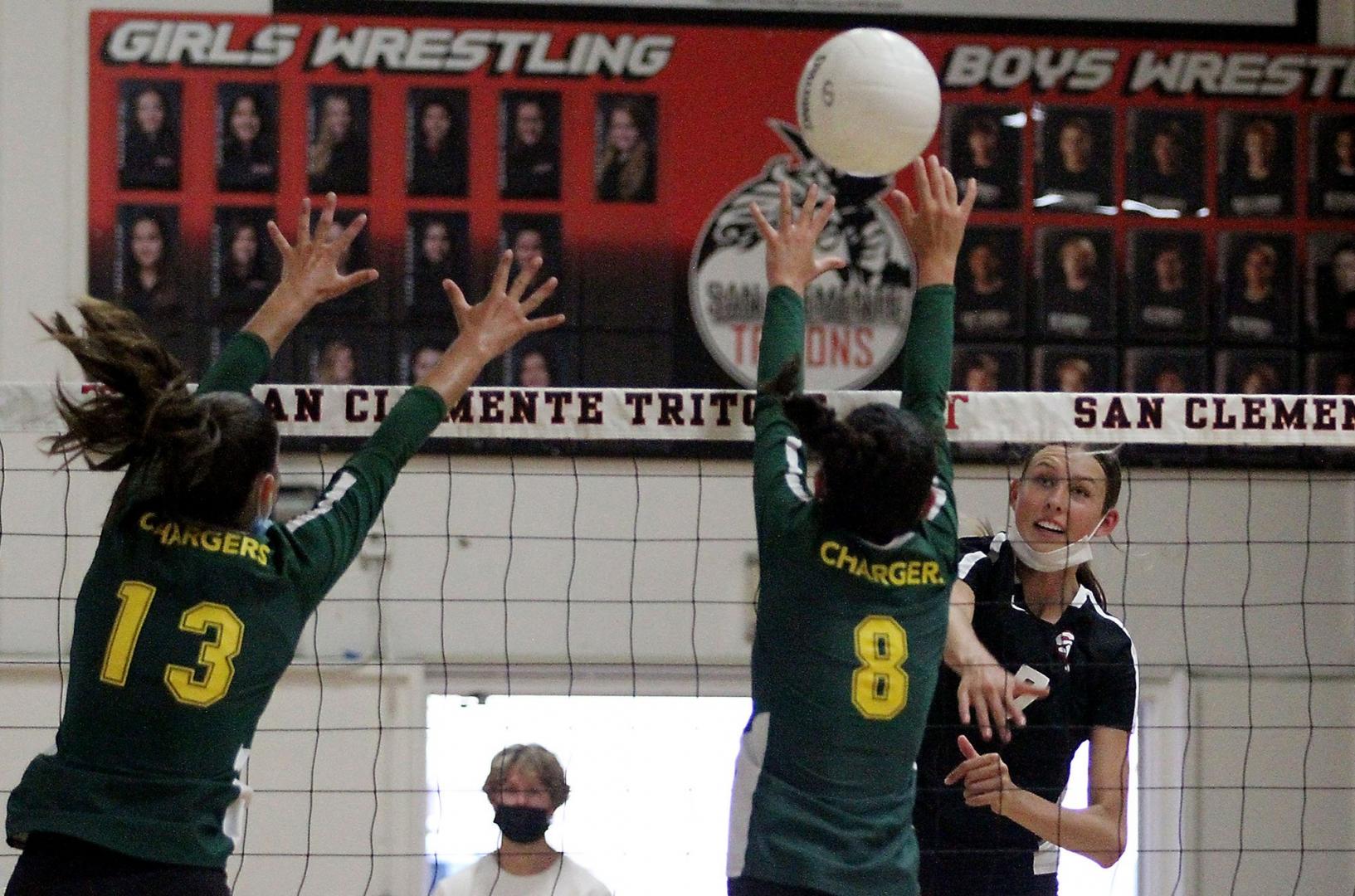 Not only did the Tritons sweep Edison in consecutive sets (25-17, 25-12, 25,) but received news that two of their starters will soon return from injury.

“We had to change our whole lineup but I think we are gelling together,” San Clemente coach Casey Swenson said. “We are really excited about how everyone is stepping up into their roles.”

The Tritons have been without senior middle blocker Abigail Brown and setter Haley Brown since their game last week against Newport Harbor after the two collided into each other and were treated for concussions.

The injuries forced Swenson to switch the lineup but wasn’t a problem against Edison.

San Clemente jumped out to a 10-5 lead in the first set on a pair of kills by senior outside hitter Ryan Coughlin.

The Chargers roared back with some offense by Summer Witherby but they couldn’t get closer than a 15-13 deficit.

San Clemente took advantage and after junior middle blocker Hannah Eberle scored an ace and provided some defense with a block, outside hitter Audrey Della Vedova scored a kill to take the first set.

“Our energy was really good this match,” Eberle said. “Sometimes it takes a bit to lift that energy where we need it. Hype music and cheers really help.”

The Tritons’ energy from the first set moved into the second set as they started on an 8-0 run.

Edison finally found some offense with kills by Taylor Lak and Molly McCluskey but San Clemente kept pushing forward and held a 17-7 lead when freshman Quinn Loper spiked the ball through the defense.

“Coming out aggressively is the best thing you can do,” Eberle said.

It wasn’t long after that that Eberle scored the game-winning point to take the second set 25-12.

The Chargers tied to mount a comeback in the third set keeping it close early until San Clemente went on a 14-3 run.

Junior opposite Lily Dwinell scored a kill followed another kill by junior outside hitter Ella Scott and the Tritons cruised for their eighth sweep of the year.

“Our passing was really good on serve-receive and all of our girls were just backing each other up,” Swenson said. “It was really good to see all the support these players had for another.”

San Clemente will be back at full strength when it finishes up its non-league schedule against Mission Viejo on Thursday before it starts its South Coast League play against Trabuco Hills next Tuesday.