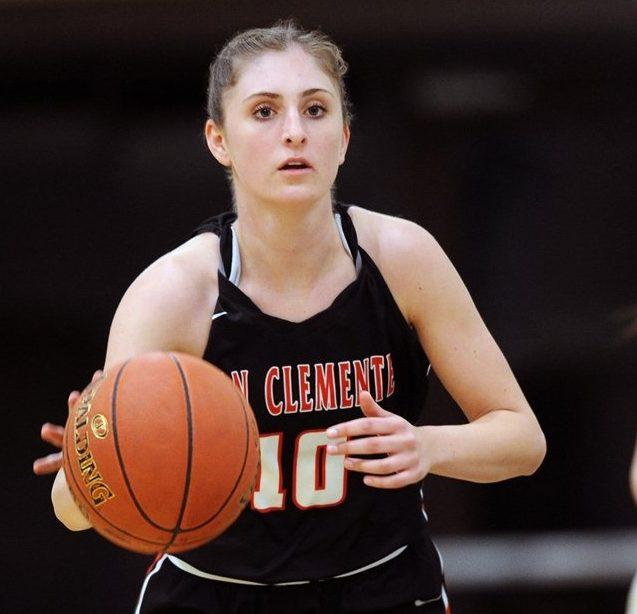 “My family lives up in Canada,” she said. “I always love traveling up there.”

Now, she gets to play the game she loves there, as well.

Simon Fraser is the only NCAA school in Canada, sitting just southeast of Vancouver.

So, it wasn’t surprising when she decided to sign there.

“It was the perfect fit, and I wanted that NCAA experience,” Stewart said. “Moving to Canada is big move but knowing my family can see me when I can come back to California and play was a big factor.”

SFU, an NCAA Division II school that plays out of the Great Northwest Athletic Conference, has traveled to  Southern California for games in each of the last three seasons.

Looking up her to father

Stewart’s love for basketball stemmed from her father, David.

David Stewart not only played basketball, but also ran track and became the Canadian national decathlon champion in 1998.

“He represented his country in track, so (heading to Simon Fraser) would be a great way (for me) to do the same in basketball,” she said.

While Kyra played other sports, such as volleyball and track, her first love has always been basketball.

“I played basketball because my dad played when he was a kid,” Stewart said. “When I got into club teams I really began to focus on my game.”

Finding her place in San Clemente

Stewart and her family eventually moved from Michigan to Southern California, where she attended Portola High School.

She played basketball two seasons for the Bulldogs and ended up setting a school record in the long jump before transferring to San Clemente.

While she sat out some time the next season because of transfer rules, she still bonded with her teammates and even helped out with some coaching.

“We were in a tournament and I handed her the clipboard saying, ‘You draw up the play,’” San Clemente head coach Keri Husbands said. “She designed this awesome out-of-bounds play, and it worked. Our bench went crazy. You would have thought we won the NCAA Tournament.”

Once she got on the court, she was an immediate impact as she helped lead San Clemente to 29 wins, a spot in the CIF-SS Division 2A title game and wins in the CIF State Tournament.

“She just has an incredible motor and some great basketball IQ,” Husbands said. “As great an as offensive player as she is, what she really brings to the team is defense. She just works and is always tasked with guarding the opposing team’s best player.”

By the end of the season, she was selected as a member of the all-South Coast League team, averaging 11 points, 6.2 assists and 3.8 steals per game.

Stewart will join a Simon Fraser team that has seen success in recent years.

“Kyra is a great addition to our team,” SFU head coach Bruce Langford said. “She brings a commitment and dedication to both the class and the court.”

Stewart does not know what will come out of the 2020-21 high school basketball season because of the coronavirus pandemic, but she is still working with NBA trainer Jordan Lawley to prepare for college.

No matter what happens, she will look back with fondness on her time with the Tritons.

“We were just so supportive of each other,” Stewart said. “We were focused, but we also had fun at the same time.”