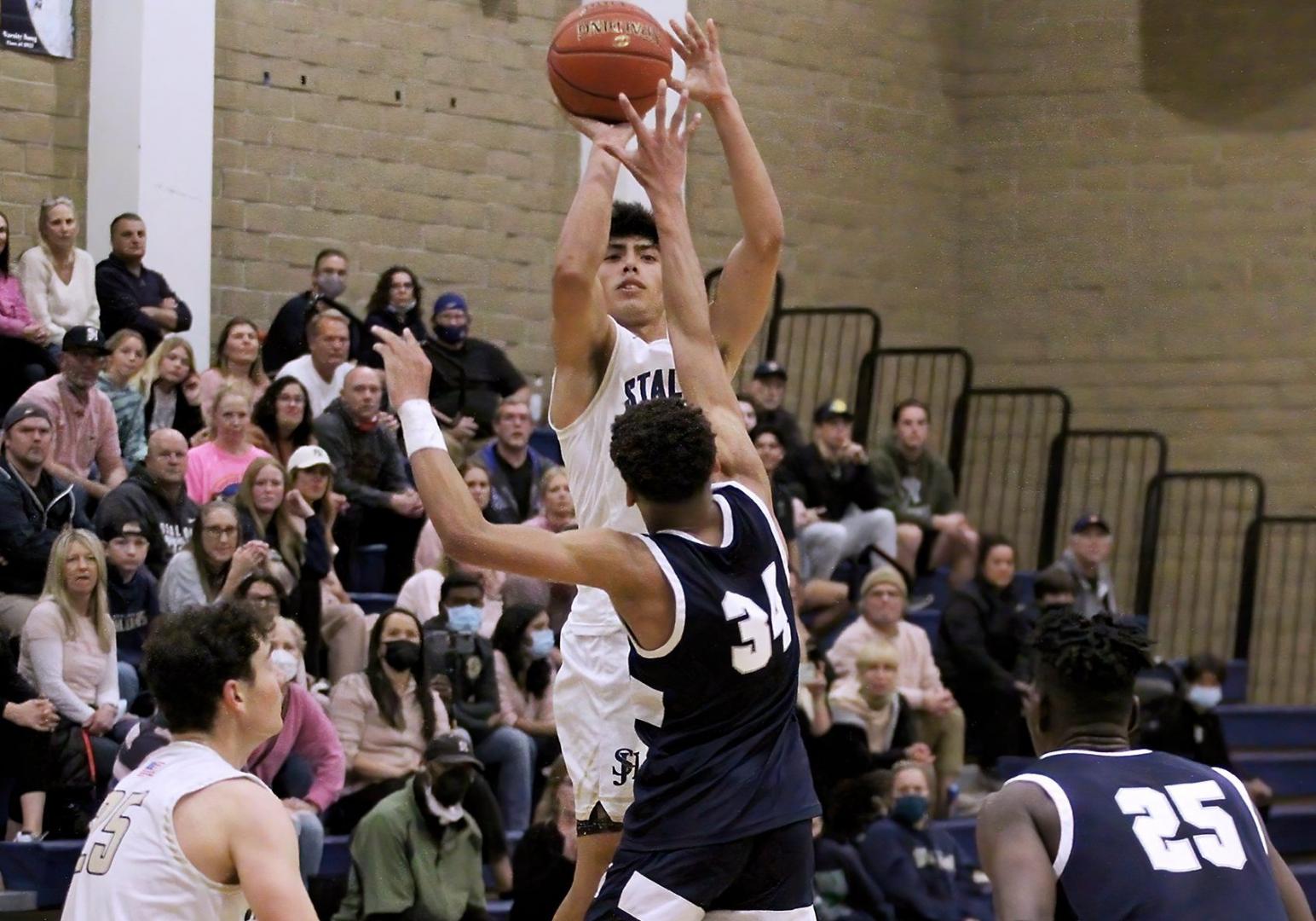 Their overtime loss to King High School at home last May is still fresh in their minds.

But history wouldn’t repeat itself on Tuesday night.

San Juan Hills ran over Aquinas, 78-54 in the second round of the CIF-Southern Section Division 2A Tournament.

The Stallions were one of three teams received a bye in the first round.

“I feel like this was something we needed to do,” Stallions coach Jason Efstathiou said of the win. “We need a good, consistent game to create some confidence.”

It didn’t take long for the Stallions to find its tenacity jumping out to a quick 12-5 lead.

Aquinas rallied to get within a point on its first possession of the second quarter, but that was as close as it would get.

San Juan Hills used its swarming full-court trapping defense to cause havoc and fuel the offense as it started the second quarter on a 13-2 run.

Senior guard Mark Reichner scored all 13 points highlighted by a steal at mid-court that led to a monstrous dunk erupting the crowd and forcing Aquinas calling a time out.

“We work on defense a lot and we stress to our players that it is our foundation,” Efstathiou said. “We know we can score but there are days where you don’t so our defense has to be that backbone. It’s something we can always control.”

The Stallions kept their foot on the pedal as senior John McFadden also started to get involved with the offense. He scored a few baskets inside and then drained a 3-pointer from the wing just as the quarter ended.

San Juan Hills held a 39-23 halftime lead over the defending 3A state champions.

“When we get rolling there is no stop,” McFadden said. “When we all start clicking together, we just start hitting shots.”

The Stallions kept pushing throughout the second half and remained relentless on defense.

They allowed just four field goals in the third quarter that the trio of McFadden, Reichner and Jacob Simon took advantage of.

Reichner led all scorers with 21 points while McFadden added 17 points and Simon finished with 15.

“Once we get a bunch of turnovers, it just sparks the offense,” Simon said. “All season our coaches have stressed the importance of defense and we have learned to play hard on every possession.”

By the fourth quarter, the San Juan Hills starters took a backseat to its bench who kept pressuring Aquinas.

Senior point guard Marcus Parks scored on a few crafty moves to the bucket while senior Beckett Kitaen and Nathan Goltara also made some shots.

San Juan Hills’ roster easily has nine players that have seen action in at least 16 games this season and with so many scorers up and down the bench, Simon said it takes a lot of the pressure off knowing he or someone else has to carry the offense by themself.

San Juan Hills will now host Thousand Oaks in the 2A quarterfinals on Friday and aren’t ready for their season to end.