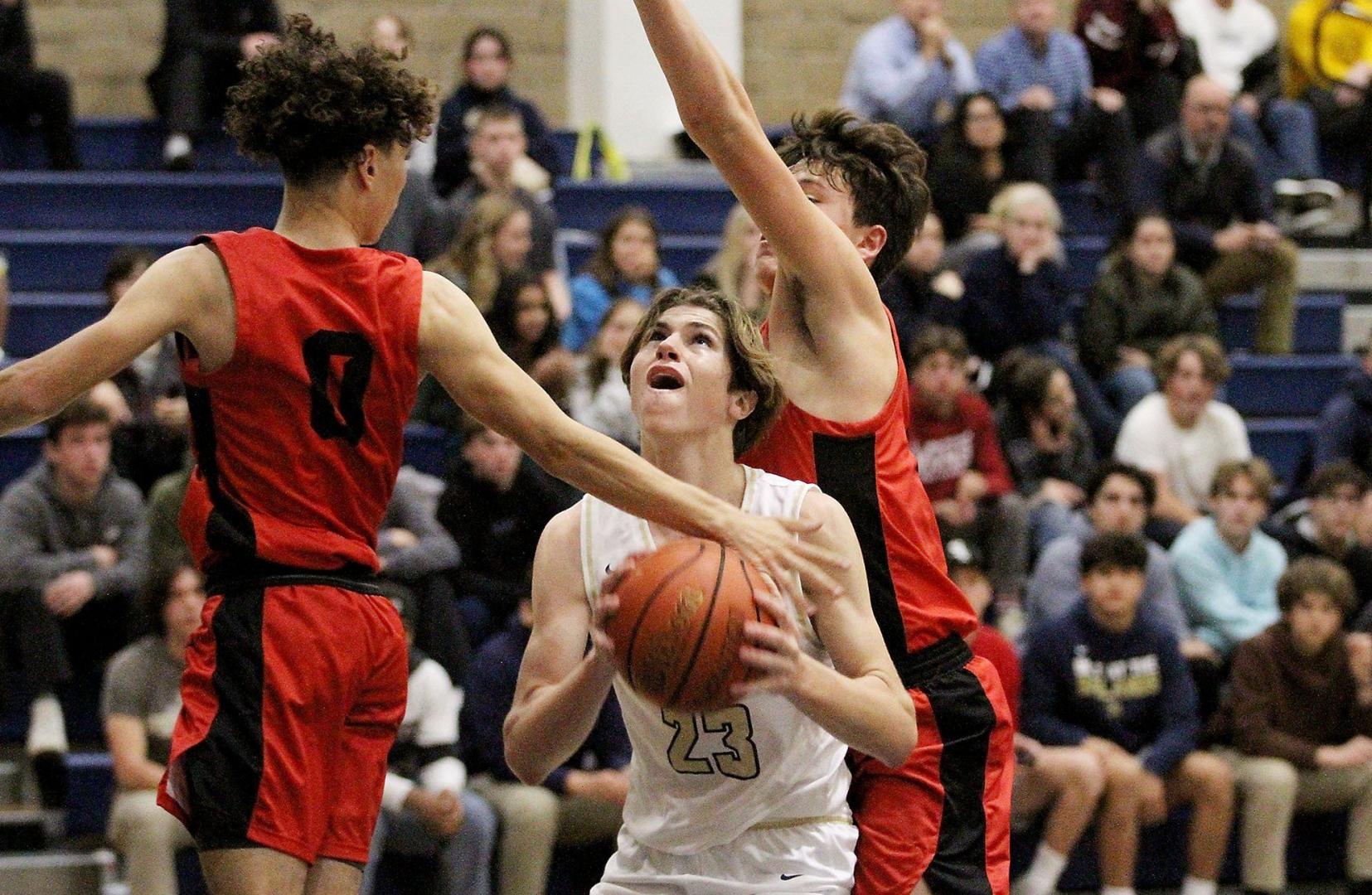 It won its last five games by double digits.

But the Stallions showed perseverance on Thursday against Mission Viejo.

San Juan Hills overcame its mistakes and some hot shooting by the Diablos as they escaped the Woodlands with a 67-56 win in their third game of the Eagle Classic Tournament co-hosted by the Stallions and Capo Valley Christian.

“Even though we got the win we didn’t play that well as a team,” McFadden said. “This win doesn’t really show who we are.”

Mission Viejo had struggled this past month losing five out of its last six games, but caught fire just after tipoff.

Senior forward Conor Dagarin hit a pair of 3-pointers followed by a 3-pointer by Josh Hewitt.

Senior Mark Reichner scored three straight baskets and senior guard John McFadden was a presence inside but the Diablos held an 18-17 lead after the first eight minutes.

The Stallions got some other players involved in the second quarter as Thomas Hattan hit a 3-pointer and converted a three-point play after driving down the lane and making the shot while getting fouled.

Reichner also got involved adding four point, but Mission Viejo would not lay down.

Dagarin, who finished with a team-high 13 points, added five points in the quarter as the Diablos took their slim lead into halftime.

“We came out extremely flat and not moving the way we should on defense.” Stallions coach Jason Efstathiou said. “There were too many guys making individual plays.”

The Stallions settled down in the second half.

Simon finished with 14 points and was one of four players in double figures.

“It’s nice to be able to log to other guys if someone is struggling,” Efstathiou said. “Tonight we had a couple guys really step up.

McFadden is listed at 6-foot-6 but plays a guard position.

Whether it was grabbing a rebound and pushing the ball up court on a fast break or fighting for an inside bucket, McFadden said his versatility I

“With my size I can do a lot more than just muscle in the paint,” he said.

McFadden helped the Stallions close the game out as the offense ran through him in the post as they eventually captured the win.

San Juan Hills didn’t make any adjustments in the second half but  Efstathiou said no adjustments were needed.

“The adjustment was telling them we needed to pull our heads out of our tails,” Efstathiou said.

The Stallions will now wait to see who they play on Saturday in the championship.

Both Dana Hills and Capo Valley Christian are undefeated and square off to play tomorrow. It’s likely San Juan Hills will get the winner of that game.

The Stallions faced Capo Valley Christian just over a week ago in the Diablo Inferno Tournament at Mission Viejo.

“Our goal is to win every game of this tournament,” McFadden said. “We are hoping for that (rematch).”