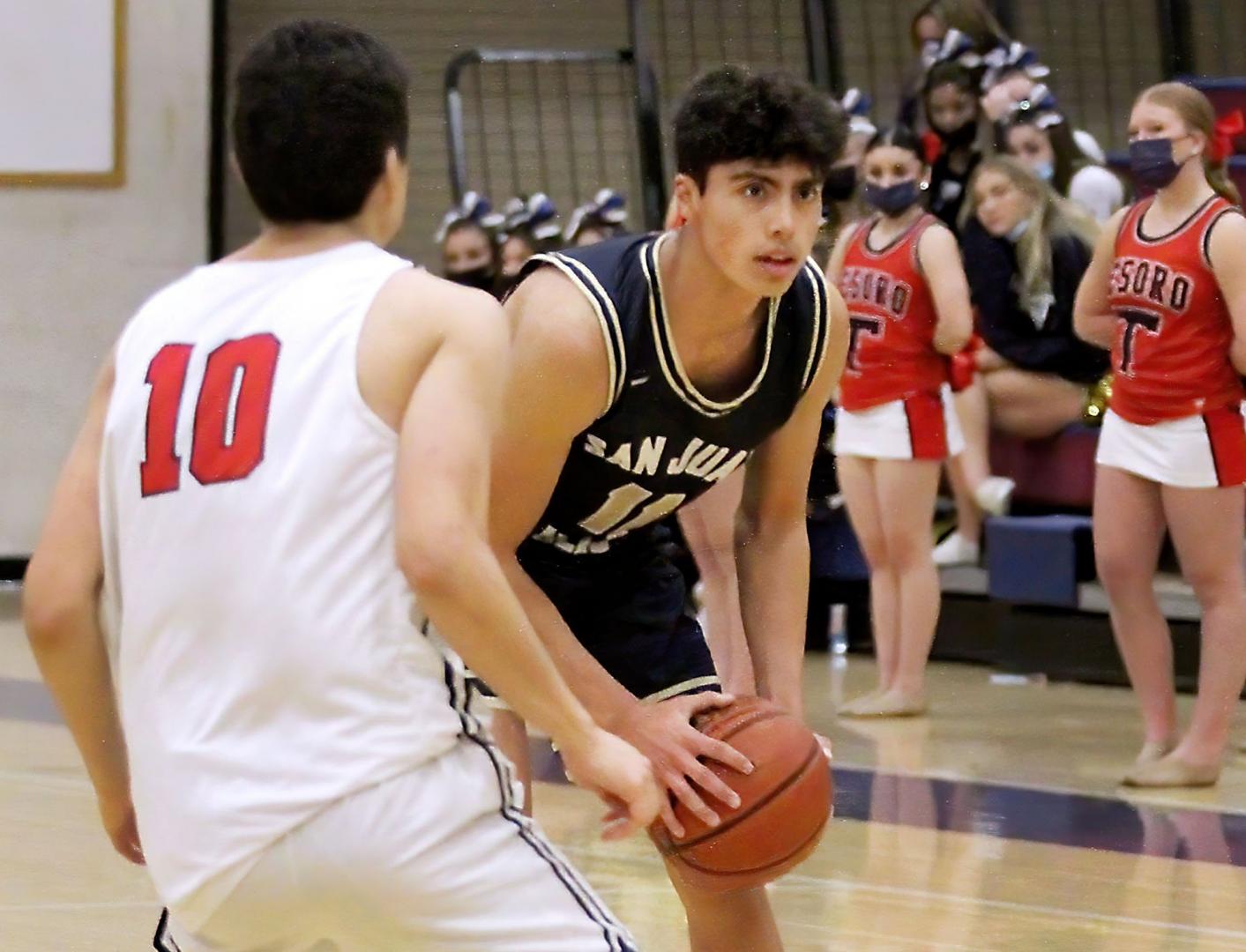 The Stallions were down by 10.

“They left too much time on the clock,’ Reichner said.

San Juan Hills made some big plays down the stretch such as John McFadden throwing down a break away dunk and Mason Bremher hitting a 3-pointer in the corner to the tie the game,

All Reichner needed to do was hit a floater with 1.9 seconds left to stun the Tesoro crowd with a 58-56 win.

“We were either going to leave this gym and be like could’ve, would’ve , should’ve or we were going to get everyone on the same page and defend like we never have before,” Stallions coach Jason Efstathiou said. “That was a great comeback by these guys. I”m super proud of them.”

It won nine of its last 10 games and two out of its three losses came to Trinity League schools, Mater Dei and JSerra.Tesoro also hasn’t lost at home this season.

The Titans took control early with 3-pointers by Kyle Gleason and Carson Brown.

The Stallions used that momentum as Jacob Simon made a shot, followed by Thomas Hattan driving to the basket. Reichner hit another three and McFadden scored inside and all of a sudden San Juan Hills was ahead by double digits.

But Tesoro leaned on its outside shooting.

After Brown successfully converted three straight trips to the foul line, he and Jake Bennett hit back-to-back 3-pointers and the Titans’ once 10-point deficit turned into a 29-28 halftime lead.

Brown scored 14 of his 20 points in the first half.

After both teams came out of the locker room, the Titans kept pushing forward.

Bennett and Isiah Viajar hit 3-pointers and Tesoro was up by 10 points. By the start of the fourth quarter, their lead increased to 47-34 following Viajar’s three-point play.

“We knew we were going to have to start defending,” Efstathiou said. “They shoot the all really well. They buried some threes.”

The fourth quarter saw Tesoro matching every San Juan Hills basket. Simon, who had 14 points, even fouled out.

But the Stallions ended up holding Tesoro without a field goal the final three minutes. Its only point was a free throw by Viajar.

“When that fourth quarter hits, the adrenaline starts flowing and you have to do everything you can to win,” Brehmer said.

Two straight steals by McFadden including the second that ended in a monstrous dunk that brought the Stallions’ student section alive started the run.

Brehmer hit a 3-pointer in the final minute to tie the game.

Reichner looked at his coach during the last position for a signal.

“Mark was playing well, he was pumped and is a guy that can make individual plays,” Efstathiou said. “We had sets we could have called, but I told him to take it.”

Reichner finished the game with a team-high 17 points.

As the Stallions celebrated with their fans at the center logo, Efstathiou sat back and relished the comeback. He knew the win would help San Juan Hills in the CIF-Southern Section 2A poll despite holding the top spot, and he credits every one of his players.

“These guys genuinly like and enjoy each other,” Efstathiou said. “Everybody gets along.”

There will be no rest for either team as both resume league play on Friday.

“It starts by showing up and winning at practice,” Efstathiou said. “We know we are going to have to play our best.”