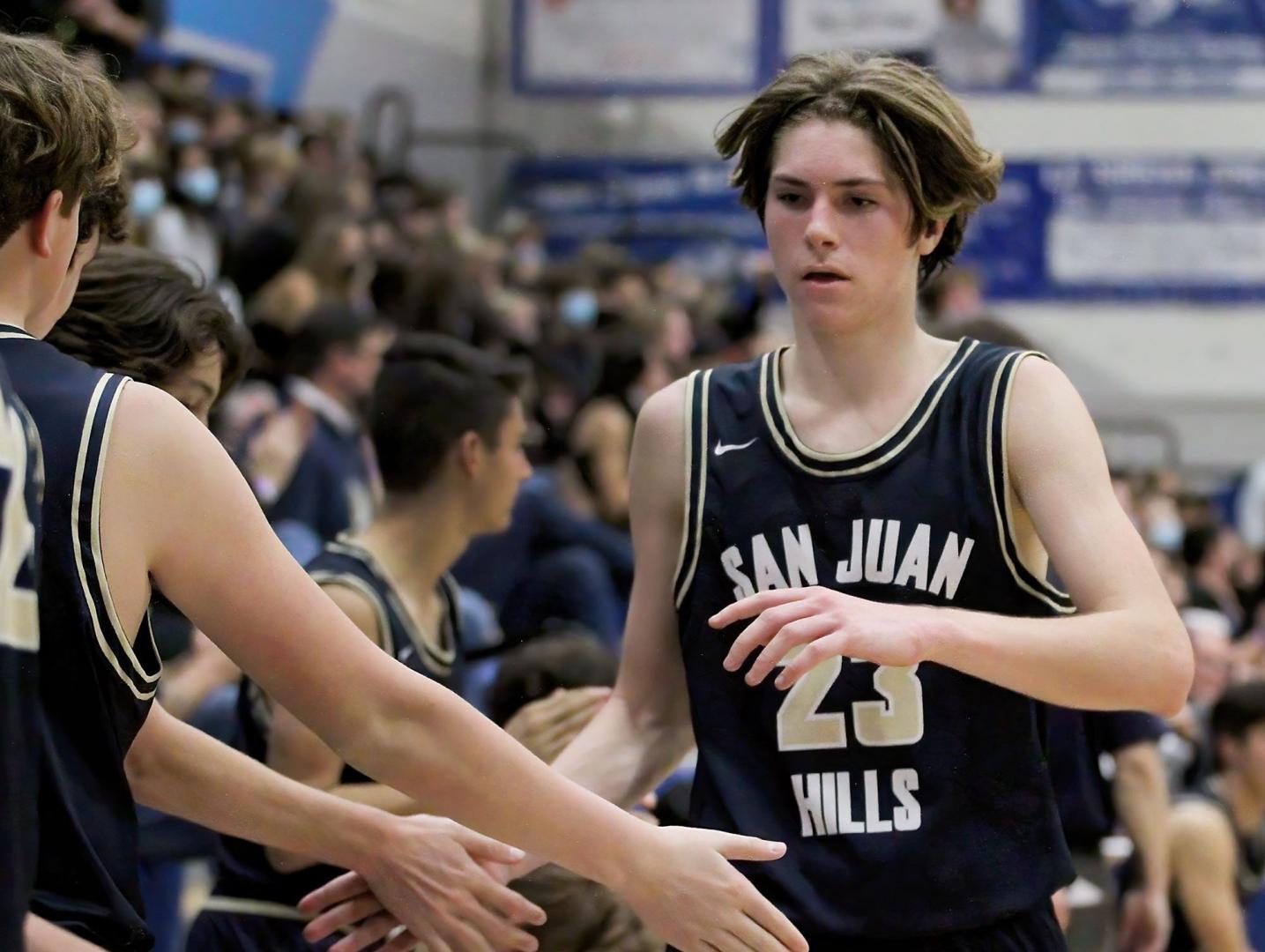 DANA POINT — The San Juan Hills boys basketball team has had many bright moments this season.

Senior Mark Reichner scored a season-high 32 points against Cypress back in December.

More recent, the Stallions came from behind to defeat ranked Aliso Niguel and Tesoro within a span of two weeks.

But coach Jason Efstathiou said Friday’s fourth quarter against Dana Hills could have been the best his team has played all season.

“It was because of our ball movement,” Efstathiou said. “That’s where our depth comes into play. Now when you move the ball you see multiple guys do things.”

San Juan Hills scored 23 points in the fourth quarter that ultimately led to a 69-48 win to remain undefeated in the Sea View League.

The Stallions entered Dana Hills’ gymnasium with their offense not quite in sync.

Senior John McFadden led with six points, but they watched the Dolphins answer whether it be a 3-pointer from the brothers Collin and Griffin Haugh or a shot inside from Adam Pellini.

Two late shots by McFadden finally gave them a slim 14-13 lead at the end of the first quarter, but it didn’t last long.

While San Juan Hills neutralized the Haugh brothers’ 3-point barrage. Pellini established a presence inside to score 12 points. He finished with a team-high 20.

The Dolphins led for the majority of the second quarter, until Reichner hit a 3-pointer just before time expired to tie the score at halftime.

“Credit to Dana,” Efstathiou said. “They forced us out of our zone just because they shot the ball so well.”

But in the second half, the Stallions found their stride.

McFadden stands at 6-foot-6 with a presence in the paint, but he will be the first to tell you he has a guard-like ability.

“I try to do everything; points, rebounds, assists,” he said, finishing with 20 points.

McFadden is leading the team in rebounds, assists and steals per game this season and is just below Reichner in total points.

He took control in the third quarter scoring the team’s first three shots and then put his team ahead by nine when he received a behind-the-back dish from Jacob Simon. He finished with 19 points.

“Our basketball IQ is above a lot of teams,” senior Gavin Gloude said. “We have so much experience on the court.”

By the fourth quarter, San Juan Hills established a double-digit lead and ran with it.

Reichner scored three consecutive buckets and scored 12 of his 23 points in the final eight minutes.

“We were just moving the ball so well and we were all getting good looks,” Reichner said. “We love to push the pace.”

With just four games left on the regular season schedule, the players are just as hungry as they were during the season-opener back against Costa Mesa.

“I love my team so much,” Reichner said. “I want to win for them, my coaches and my family.”