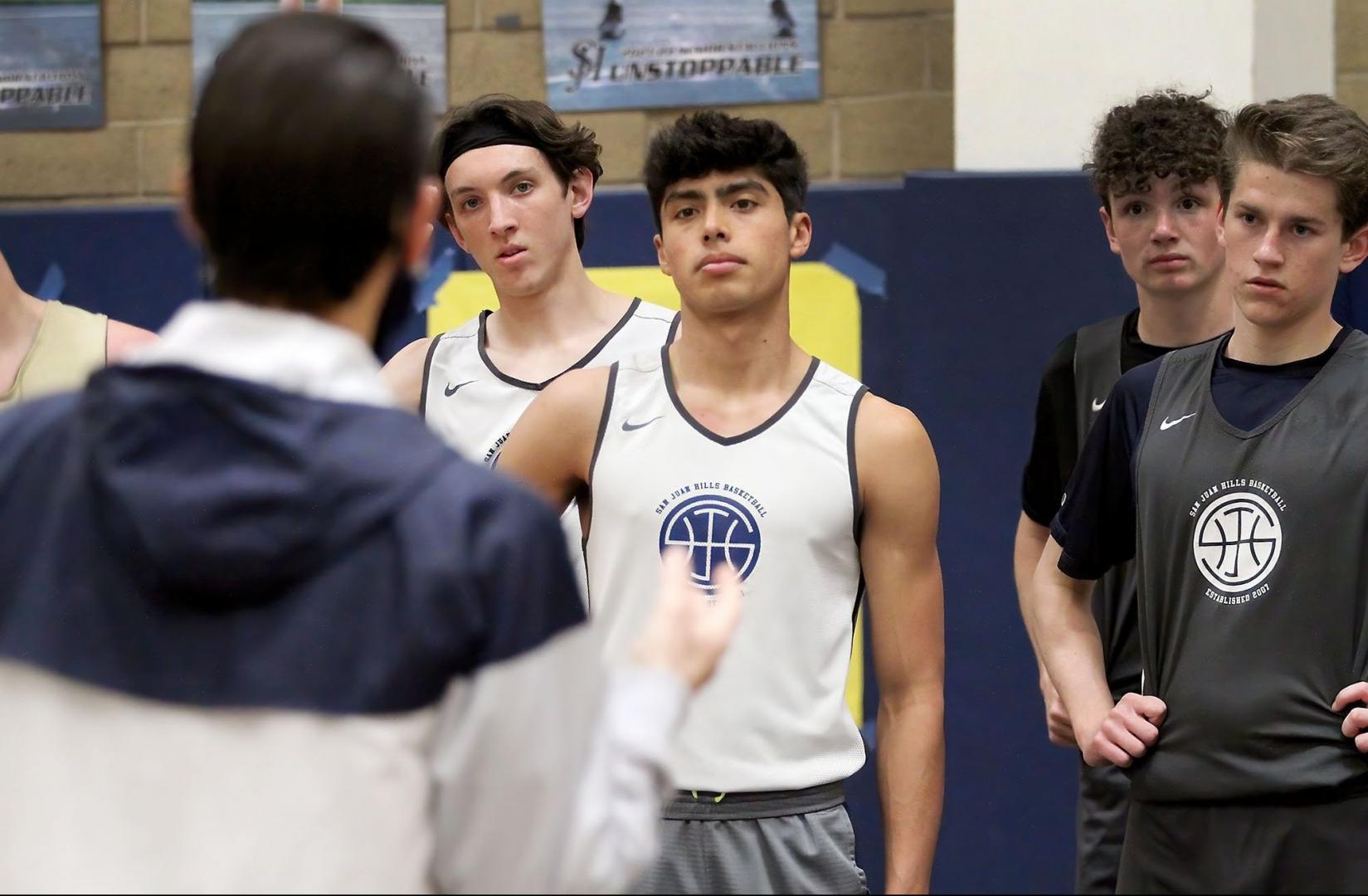 Members of the San Juan Hills boys basketball teams listen to their coach, Jason Efstathiou, at the start of pratctice in San Juan Capistrano, Wednesday, Feb. 23, 2022. Efstathiou has talked to his team about unselfiahness and being unstoppable all season as the team prepares for the CIF-Southern Section Div. 2A championship against La Mirada on Friday night. (Ryan Kuhn, SOCoPrepSports.com)

Their championship opponent, La Mirada, is on fire.

The Matadores have won their last last ten games en route to the CIF-Southern Section Div. 2A title game.

The Stallions have already made school history, making it to its first quarterfinal, semifinal and now championship basketball game, but looking back on this season, both the players and their coach agree that they have all learned from one another to build a successful program.

When Efstathiou was hired to take over the program in 2015, he started to establish a vision based on understanding one another.

“A big part of coaching is talking to players, communicating with them, and letting them know what is expected, but also hearing them out too,” Efstathiou said. “When everyone works together like that, that’s where you can get a common goal.”

The team’s communication starts with his coaching staff. Efstathiou brought in a handful of coaches, such as Art Carrido, Spencer Vann and Jason’s brother Jorin, each one with a different voice but all working in unison.

“The players see that if we can do it, they can do it too,” Efstathiou said.

Their message to the team is to be unstoppable.

“Being unstoppable doesn’t always mean you can’t have a setback but means having the mentality of loving one another and sacrificing for one another,” Efstathiou said.

And that might even including some individuals scoring production.

Senior guards Mark Reichner, John McFadden and Jacob Simon have all shown the ability to score the basketball.

Reichner finished with 27 points in the quarterfinals against Aquinas. In that same game, McFadden finished with 19 points. Simon added 17 points and was perfect 3-for-3 from behind the 3-point line.

Now, every player wants success for their teammate, whoever that might be.

“That’s why we are successful,” Reichner said. “You see a lot of teams with individuals trying to play for themselves but you have to realize that doesn’t work. We know we have to get it to the player who is open or with the best matchup. This is a brotherhood and we are successful because we are unselfish.”

While the Stallions’ senior leaders have shown camaraderie, the chemistry didn’t develop over night.

Reichner and McFadden have worked their way to varsity since freshman season and they had to get used to playing with Simon after he transferred from JSerra following his sophomore season.

“We just trust each other,” Simon said. “I wasn’t that confident entering San Juan Hills but now my teammates and coaches have really helped me with that.”

San Juan Hills is on the cusp of hanging its first boys basketball CIF-Southern Section championship banner in the rafters of the Woodlands.

Sure, there was some anxiety early on that the players wouldn’t buy into being unselfishness and not believing in being unstoppable, but at the same time no one, coach nor player, would give up.

In fact, the coaching has now come full circle.

“[This team has] taught me that they love each other and  love playing together,” Efstathiou said. “A lot of teams can say that but every single person has bought into this program.”

But just because the school has established a successful basketball program, that doesn’t mean Efstathiou and the Stallions have accomplished all their goals.

“We are going for that win,” Renicher said of the CIF-SS Div. 2A title game on Friday. “Our icing on the cake will be when we win state.”