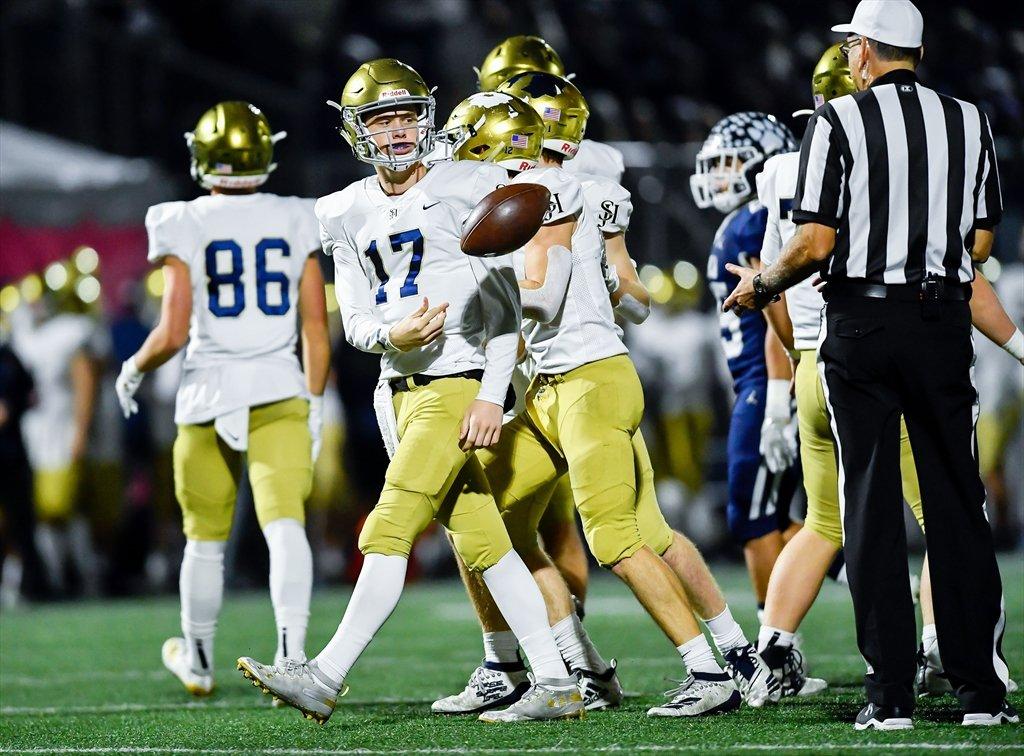 Quarterback Hudson Jones (17) tosses the ball to the referee to end the first half of the 2019 CIF-SS Div 4 championship game against Loyola. San Juan Hills starts its new season on March 19 against El Toro. (Joe Duncan, Maxpreps.com)

But that seems like ages ago to some, after enduring sports cancellations and a pandemic.

“It is not forgotten, but we have moved on,” Stallions head coach Rob Frith said.

After months of waiting, the green light was finally given to start a season.

Meanwhile, San Juan Hills has created a new focus. The team will continue to celebrate the programs’ first championship but it now knows a trophy has put a target on its back.

“Nobody cares that you won a CIF-SS Championship in 2019,” Frith said. “Everybody wants a piece of you and we have some things to prove.”

Senior quarterback Hudson Jones also has something to prove.

After earning the spot as a sophomore, he has been a staple within the Stallions offense.

While he is still waiting to make a decision where he is going to play his college, he has made the most of his time off, preparing to write his final chapters at San Juan Hills.

That’s not to say the road there was easy. Jones’ family considered moving to Arizona last fall for his final year until the CIF announced it was going to push back the season.

“You have to stay loyal and obviously it has worked out very well,” Jones said. “I was very grateful.”

Now, Jones has worked on getting bigger, faster and stronger. He has gained 20 pounds and wants to prove he can be a dual threat option.

Jones finished his junior campaign with -42 rushing yards on 50 carries but, with running back Austin Hogan having graduated, he said he plans to run the ball a lot more this year.

But he is also working on creating chemistry with his younger receiving core.

“It’s been really paying off on the practice field,” Jones said.

The defensive will also look to replace some key players.

Hobert led the team in total tackles but Tyler Wegis finished with 10.5 sacks.

Chase Schmidt and Elliot DeGroote will help anchor the defense and they credit not only their predecessors but also their defensive coordinator, Pete Silvey.

“He is a mastermind,” DeGroote said Silvey. “He can do anything and makes sure we are in the right place to make plays.”

Like other Orange County high school football teams, it has been 16 months since San Juan Hills has seen competition.

There will still be celebration and hoopla from the championship, but Frith wants his team to be different champions with an incredibly challenging schedule ahead of them that includes games against San Clemente, Capo Valley, Mission Viejo and rival Tesoro.

“It’s a new focus,” Frith said. “We are in the South Coast League and it’s the toughest public school league in all of Southern California.”