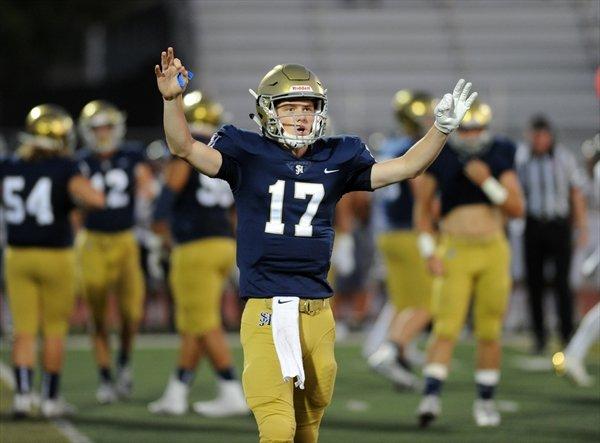 No rust was on the defending CIF-Southern Section Division 4 champion Stallions as they wasted no time taking an early lead on El Toro and kept cruising to a 48-14 win at the Badlands.

“It’s good to get a win,” San Juan Hills coach Rob Frith said. “The kids have been working for a long, long time and stayed patient. It felt good having that reward of playing a football game and showcasing their talents.”

San Juan Hills (1-0) senior quarterback Hudson Jones has verbally committed to NAIA Southeastern University but still showed he has something to prove.

On the Stallions’ first possession of the game, Jones completed four consecutive passes, including a 69-yard touchdown pass to Braden Pegan to give his team the lead.

San Juan Hills returned the ensuing kickoff when Pegan scampered for 84 yards into the end zone.

Jones then found senior Brayden Burnes on a screen pass and, by the second quarter, the Stallions were ahead 21-7.

“I was just super thankful to get out there,” said Jones, who finished with 287 yards passing and three touchdowns. “This week went by so slow because of how bad I wanted to get on the field.”

Jones did throw an interception in the second quarter and, with four games remaining on the schedule, the Stallions’ senior knows he can play better.

“I need to work on my communication,” Jones said. “It was a dumb pick I threw.”

San Juan Hills developed their offense even further by establishing a running game consisting of the duo of Burnes and Nathan Grande.

The combination of the two seniors ran for a combined 155 yards on 33 carries, and Frith said each brings his own style.

“Nathan is more of your straight-forward running back that will get you some tough yards but, at the end of the day, both of them did exactly what we wanted them to do,” Frith said.

Burnes scored on a 5-yard touchdown run just before halftime as the Stallions led 31-7.

Jones continued to carve up the Chargers defense in the second half when he threw his third touchdown pass of the game to Cole Monach and, soon after, tight end Brayden Bockler scored on a 3-yard run.

The defense even made a statement during the second half when senior free safety Dylan Bennett picked up a fumble and returned it 44-yards to the El Toro 1-yard line.

“When we are out there, it is nice to have options,” Frith said. “Our coaching staff does a great job throughout the game looking for opportunities.”

Late in the fourth quarter, the combination of Jaden Williom and Elijah Ponce also made a statement by sacking Miller.

El Toro was coming off just two wins last year, but did show glimpses of offense late in the game when running back Jared Gomez scored on a 45-yard touchdown run.

Chargers’ head coach Randall Reynoso said his team will look to improve next week when it hosts La Mirada on Thursday.

“We learned we have a lot of work to do. San Juan Hills is a very good team,” Reynoso said. “The result was not what we wanted but just seeing guys playing ball and seeing them compete was a positive note in itself.”

As for the Stallions, Frith will take his potent offense into Capo Valley, but still recognizes that there is plenty of room for improvement.

“We just need to be consistent up front and work to that next level,” Frith said. “I think our guys are headed in the right direction, we just need to fine tune those techniques.”