The Stallions trample the Cougars 66-13 on homecoming night 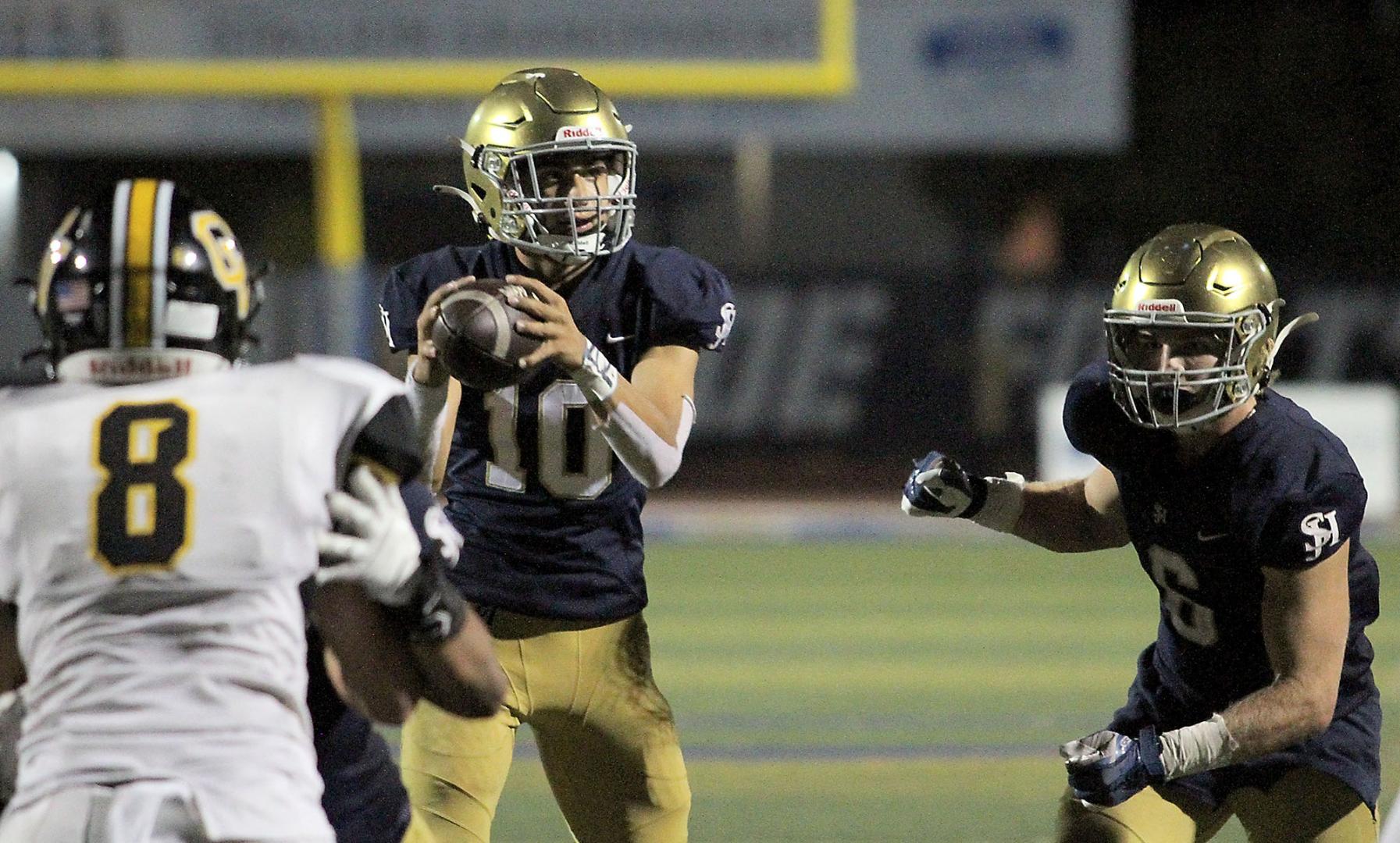 But now he looks back and realizes his players learned a valuable lesson.

“We learned that we have to play right from the beginning,” Frith said.

So they took that to heart in the Badlands against Capo Valley.

Before you could blink, Tollefson found the end zone again, this time on a 2-yard run.

Quick touchdowns were clearly the theme as San Juan Hills trampled over the Cougars for a 66-13 homecoming win on Friday night.

The Stallions’ 66 points were a program record for most points in a game.

“Our guys are playing really good football at the right time,” Frith said.

Gaines marched his offense down field and scored on a 4-yard run. The Stallions held a 21-0 lead with 2:52 remaining in the first quarter.

“We had hoped we would have played like this at this point in the season,” Frith said, with a smile.

Capo Valley’s offense sputtered for much of the first half until quarterback Trey Kukuk found an opening with some runs and scored on a 3-yard scamper.

On the second quarter’s opening drive, it took just one play for Tollefson to find senior wide receiver Braden Pegan for a 71-yard one-handed touchdown reception to give the Stallions it’s 21-point lead back.

“We knew we had to put up a lot of points and then we just started exploding after that,” said Tollefson, who finished with 236 yards passing and six total touchdowns. “Our offense was rolling.”

Tollefson connected with Barclay for two more touchdown passes, the second being a 54-yard strike down the middle of the field.

Barclay has battled illness and injury this season after contracting mono this past summer and missed some games back in September with a sore back.

Now he and his coaches say he is 100 percent and he showed what he could do. Barclay finished with three catches for 125 yards and three touchdowns.

“It feels great,” Barclay said. “ I have just worked all week in practice playing off man (defense).”

San Juan Hills added two more touchdowns before halftime and entered the locker room with their highest point-total in more than a decade.

“We dealt with some growing pains (this year) but we owned it and we worked on getting better,” Frith said. “That showed tonight.”

San Juan Hills’ offense slowed down a bit in the second half under the comfort of a running clock and Tollefson, Gaines, Barclay and the rest of the first team watching from the sidelines.

But there were still a few fireworks left over from the homecoming show.

Junior Colton Joseph came in at quarterback and scored on a 15-yard run early in the second half and later he marched the Stallions down to the goal line where they settled for a 20-yard field goal.

San Juan Hills has outscored its last two Sea View League opponents 103-27 but will still have a challenge ahead when it starts South Coast League play against San Clemente next Friday.

The Tritons have won the last three meetings including last year’s 35-7 win.