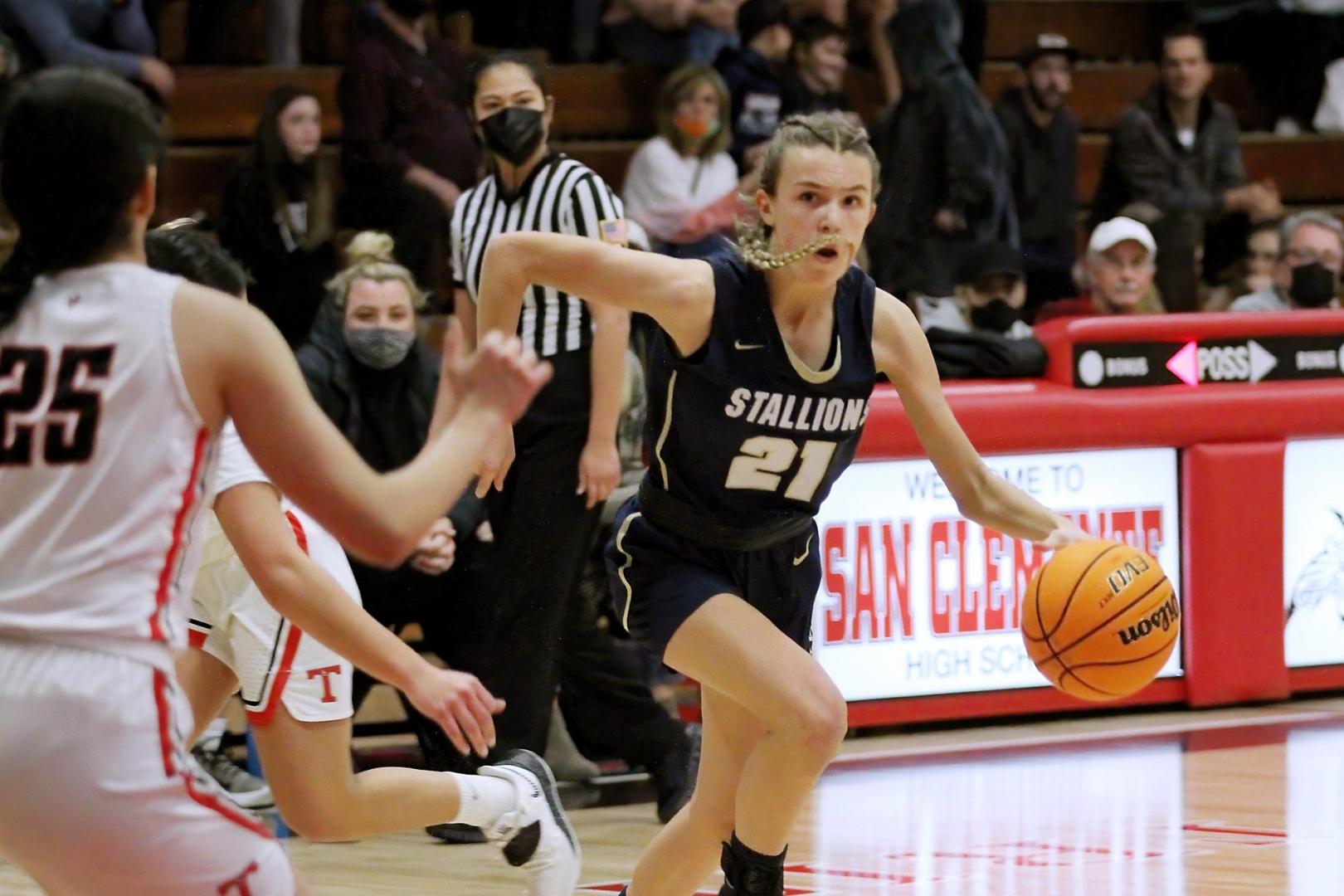 SAN CLEMENTE — It has been three long years since San Juan Hills girls basketball has taken down San Clemente.

But that all changed on Tuesday night.

The Stallions sprinted past the Tritons, 52-38, during the South Coast League opener at San Clemente High School.

San Juan Hills coach Paul Edwards noted that it was just one win, but is excited the direction his team is headed in.

“No banners were handed out yet, but it was a great start for us,” Edwards said.

San Juan Hills (14-5, 1-0) jumped out early on the Tritons with some buckets by junior Amanda Edwards.

Freshman Anna Shreeve added a score just before the end of the first quarter and the Stallions held a 12-7 lead.

While San Juan Hills has been plenty of time on the court after finishing last week’s So Cal Classic with four wins, San Clemente has just played one game since Dec. 23. Coach Kerri Husbands said her team has been fighting illness including two players contracting COVID-19 which forced them to shut down for 10 days.

Still, the Tritons (6-9, 0-1) battled throughout the second quarter as sophomore Zona Miller and junior Emma Massamiri scored to get within three points.

But the Stallions put together a 9-2 run that saw a 3-pointer by Sydney Peterson and another score by Shreeve to take a 26-16 lead into halftime.

“We moved the ball and we adapted well to (San Clemente’s) pressure,” Edwards said. “We were getting shots and we handled the ball well.”

Peterson was forced to start the second half on the bench holding four fouls and San Clemente took advantage.

After some quick scores, Edwards pointed to Peterson who came back in and the offense found its groove.

Peterson finished with 13 points and didn’t commit a foul for the rest of the game.

Shreeve and Edwards led the scoring with 16 points a piece. Shreeve also brought down eight rebounds.

“You just see how much of an incredible athlete she is,” Paul Edwards said of Shreeve. “She is a 5-foot-7 freshman and rebounds like she is 6-foot tall. She gets better every day.”

San Clemente cut down its deficit to within eight points in the fourth quarter with some buckets inside from Anita Fereidooni but couldn’t get any closer.

San Clemente will now regroup as it is supposed to face Aliso Niguel on Thursday, however that game might need to be rescheduled after an Aliso Niguel player tested positive for COVID-19 earlier this week.

The Wolverines’ game against Dana Hills on Tuesday was postponed until Jan. 15.

San Juan Hills will travel to Tesoro where the Titans won their last two games in the SoCal Holiday Prep Classic.

“Now we have to go to work,” Edwards said. “The next one becomes even more important.”