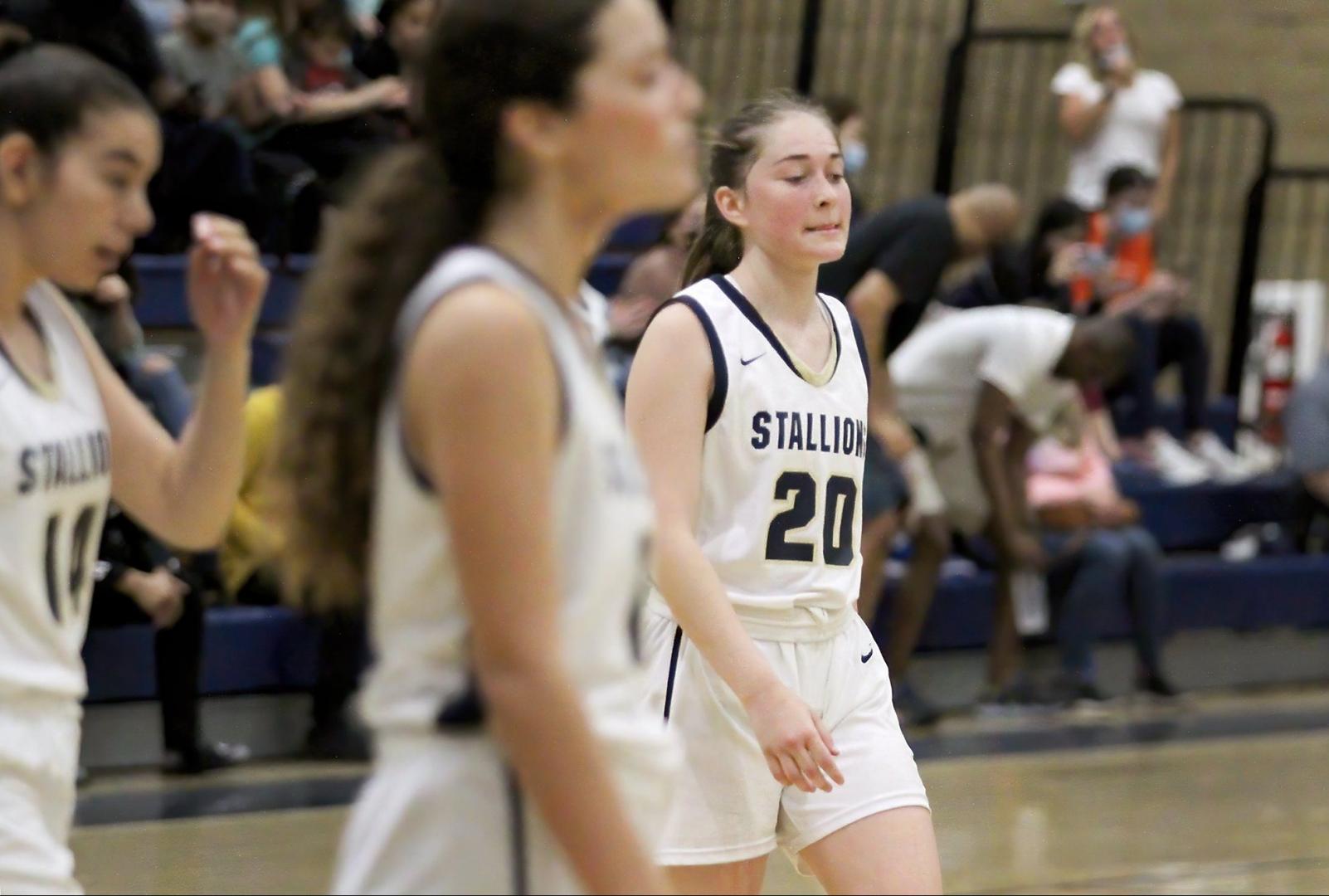 The players were heartbroken.

More so, they were exhausted.

Beckman squeaked out a 51-46 double overtime win where the entire 40 minutes felt a like a rollercoaster ride.

“It hurts. It hurts a lot.” Stallions sophomore guard Sydney Peterson said. “It just sucks to end the season like this.”

San Juan Hills won the opening tipoff and right away found its rhythm.

The Patriots had no answer for the combination of Peterson and junior guard Amanda Edwards.

Each finished with eight points in the quarter and the Stallions were holding a commanding 16-3 lead.

Then the second quarter came around.

The Patriots finally took the lead with just over three minutes left until halftime when senior Sara Hameed scored inside.

On the other end of the court, the Stallions just couldn’t hit a shot.

After starting the game making six of its first 10 shots, San Juan Hills missed its next 10 shots and was held scoreless in the second quarter.

Beckman had turned the game around and headed into halftime with a 20-16 lead.

“Even though we played so well in the first quarter, I looked at them and they looked like they played a whole game,” Stallions coach Paul Edwards said. “I just told them to relax. We weren’t blowing this game.”

Things didn’t get better for the Stallions in the third quarter as Beckman continued to control the game.

They finished the half on a 6-0 run that gave them a 33-24 lead heading into the fourth quarter.

But over the final eight minutes, San Juan Hills found a spark grabbed ahold of the momentum.

It scored only nine points in the fourth quarter but held Beckman scoreless. The Stallions even had a chance to win the game on the final possession when Peterson went the length of the court in six seconds but her layup fell short. The game was headed into overtime.

San Juan Hills controlled most of the overtime period with clutch shots by Sisson and Edwards.

After a pair of free throws by Edwards, Beckman trailed by three points with eight seconds left had one chance to tie.

Hameed came off a screen and as the buzzer rang out, her 3-pointer from the top of the key was good.

After the game, Edwards said he wanted to defend the final shot rather than intentionally fouling because he was confident in his defense.

“A lot of things can go wrong if you foul them,” Paul Edwards said. “That possession just didn’t work out for us.”

By the second overtime period, Beckman had taken back the momentum and rode the four minutes to victory.

The Stallions turned the ball over on consecutive possessions only for Keel Heibner-Chan and Kandice Okamoto to score on the other end.

“Heading into that first overtime I thought we were the team that won the fourth quarter and had a lot of energy,” Paul Edwards said. “When you give up a three like that it’s just tough.”

San Juan Hills will finished the year as South Coast League champions and returns everyone from their roster next season.

“The only way to get experience like this is to play through it,” Paul Edwards said. “We have everyone coming back and now we have to take this and use it as motivation. Now we want more.”