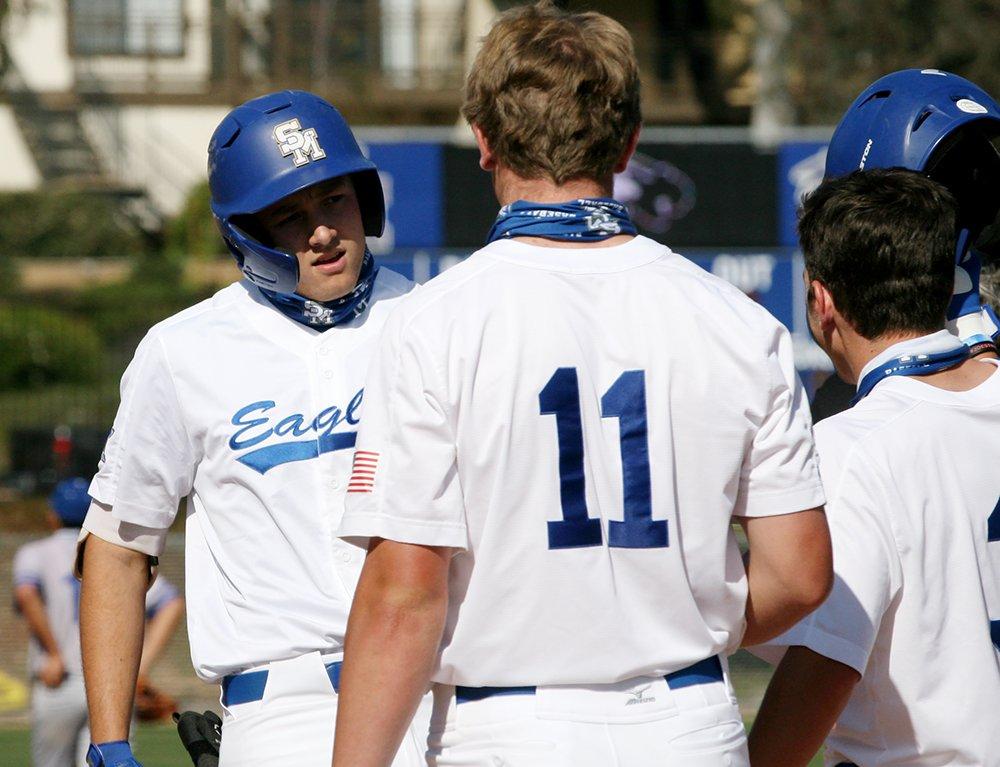 Santa Margarita designated hitter Ethan Flanagan is greeted at home plate by his teammates following a two-run home run he hit in the second inning during a high school baseball game against El Toro at Santa Margarita Catholic High School on Tuesday. The Eagles won the game 13-5. (Ryan Kuhn, SOCoPrepSports.com)

Just days after the Eagles watched Cypress celebrate a walk-off win, they returned home and hammered El Toro to a 13-5 win.

Coach Chris Melac said that throughout the season his team will be challenged, especially in a tough Trinity League, so he was proud of his players for bouncing back.

“We are a young and inexperienced ball club, so just having the ability to build some tougher skin and show some resilience is great,” he said. “Baseball is a challenging game.”

Santa Margarita (3-2) wasted little time jumping out in front of the Chargers by scoring two unearned runs in the first inning.

The Eagles flexed their muscles one inning later, when designated hitter Ethan Flanagan laced a 2-run home run over the right field fence.

“I got him on a change up,” said Flanagan, who finished 2-for-3 with the home run and 3 RBIs. “I got the pitch to hit and just went with it.”

Flanagan, who will attend UCLA next fall, is normally a pitcher but, after he was forced to have Tommy John surgery 11 months ago, Melac is strictly keeping him a designated hitter.

“My recovery has been going well and, even though I can’t pitch, I want to focus both on hitting and pitching as much as I can,” he said.

El Toro senior starting pitcher Gordon Wend regained his composure in the third inning by striking out the side, but he was still looking up at a 5-0 deficit.

The Chargers’ offense came to life in the third inning, when Leo Sanchez drove in Clay Lange on a single to left field, but the Chargers left opportunities to dig out of their hole on base.

Santa Margarita pitcher Matt Porchas allowed three hits and three walks, but struck out eight to get out of trouble.

“For him, it’s having that ability to command his pitches, and he did a better job of that today,” Melac said. “He just has tremendous stuff.”

The Eagles’ offense continued in the fifth inning when it sent nine batters to the plate and drove in five runs, including two bases loaded walks and a sacrifice fly by Colby Wallace.

Eight out of nine Santa Margarita starters finished with a hit, and Luke Lavin came off the bench to pinch hit in the sixth inning and crushed a two-run home run.

“We are super deep,” shortstop Trent Caraway said. “We get after it and we battle hard.”

El Toro (3-4) finished the game with some fight by scoring four runs, including back-to-back two-out hits by Colin Zerfass and Seth Nease, but the Eagles halted the run as pitcher Kyle Evans came in and struck out Brycen Carrasco.

“Santa Margarita is tough, but we had some misses that let the game get out of hand,” Chargers coach Mike Gonzales said. “It’s good to play teams like that because it’ll help us, come South Coast League play,”

El Toro continues its season when it faces San Clemente on Thursday, while the Eagles hosts Newport Harbor on Monday.

Even though his team has some time to rest, Melac he knows there are plenty of games left to play.

“It’s gaining experience and focusing in on those little details,” Melac said. “We know we are going to be challenged in the Trinity League, day-in and day-out.”