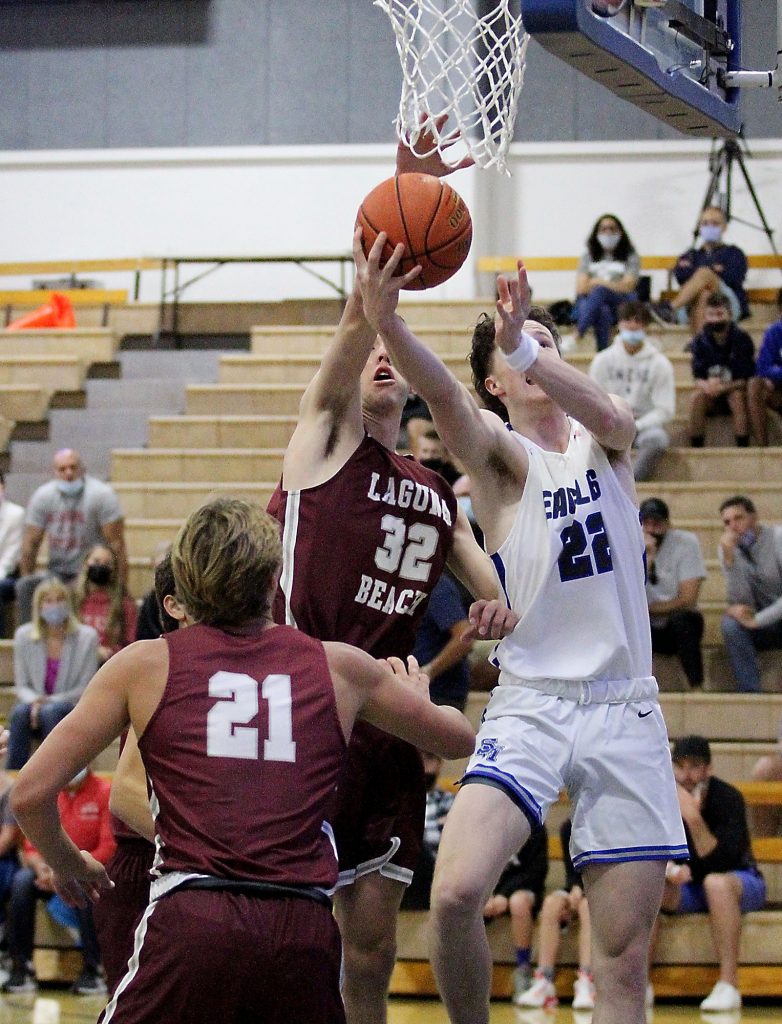 RANCHO SANTA MARGARITA— The Santa Margarita Catholic boys basketball team walked into the quarterfinals of the 2AA CIF-Southern Section tournament against Laguna Beach remembering exactly who they are.

“We like to take good shots,” Eagles coach Justin Bell said.  “Our guys have really bought into it.”

Add a funky triangle-and-2 defense to stop all-conference forward Nolan Naess and the result was a one-way ticket to the semifinals.

This was the same team just one year ago who finished with three Trinity League wins and missed out on the postseason.

“Not making the playoffs last year might have been the best thing for me as a coach,” Bell said. “Obviously you want to make it but when you don’t make (the tournament) it gives you time to dig deep on how you can get better. Sometimes winning masks some faults.”

The Eagles were soaring high over the last few weeks winning five out of their last six games.

But they remained patient, picking their spots.

Aldo Ruiz Ortiz hit a 3-pointer in the corner by Naess gave the Breakers a 8-5 advantage after the first quarter.

Santa Margarita installed a triangle-and-2 defense to try and stop Naess. Three players were in a match up zone while the other two were guarding Naess and Willie Rough.

“If we took (Naess) out, we thought we would have a better chance to win,” Eagles senior guard Coby Barnes said.

Naess hit a 3-pointer from the top of the key and finished the half with seven points.

The Eagles answered with shots on the other end by sophomore Rockwell Reynolds but still trailed at halftime, 18-16.

Santa Margarita started to gain momentum in the second half when Barnes hit some big shots. A pair of 3-pointers later, the Eagles grabbed ahold of an eight-point lead.

Naess hit a jump shot and a layup right as the buzzer went off and the Breakers were down by just four points entering the final quarter.

Laguna Beach made adjustments for one last run as Neass showed off his ball handling stills and ran isolation plays for him.

His 15 points brought the Breakers within a bucket with less than three minutes but a shot by Luke Turner and misses by Laguna Beach brought the same out of reach.

“We had to change our gameplan and I think we adjusted a little too late,” Naess said.

Reynolds added a block on Kai Gillies’ 3-point attempt and as the seconds were counting down, the Eagles were celebrating a trip to the semifinals.

“It feels good,” said Barnes, who finished with 10 points and will be playing for Point Loma next winter. “We just tried to stay the course, stick to the game plan and take good shots.”

The Eagles will now face Rolling Hills Prep on Friday.