Tartans projected to be placed in Division 11 or 12 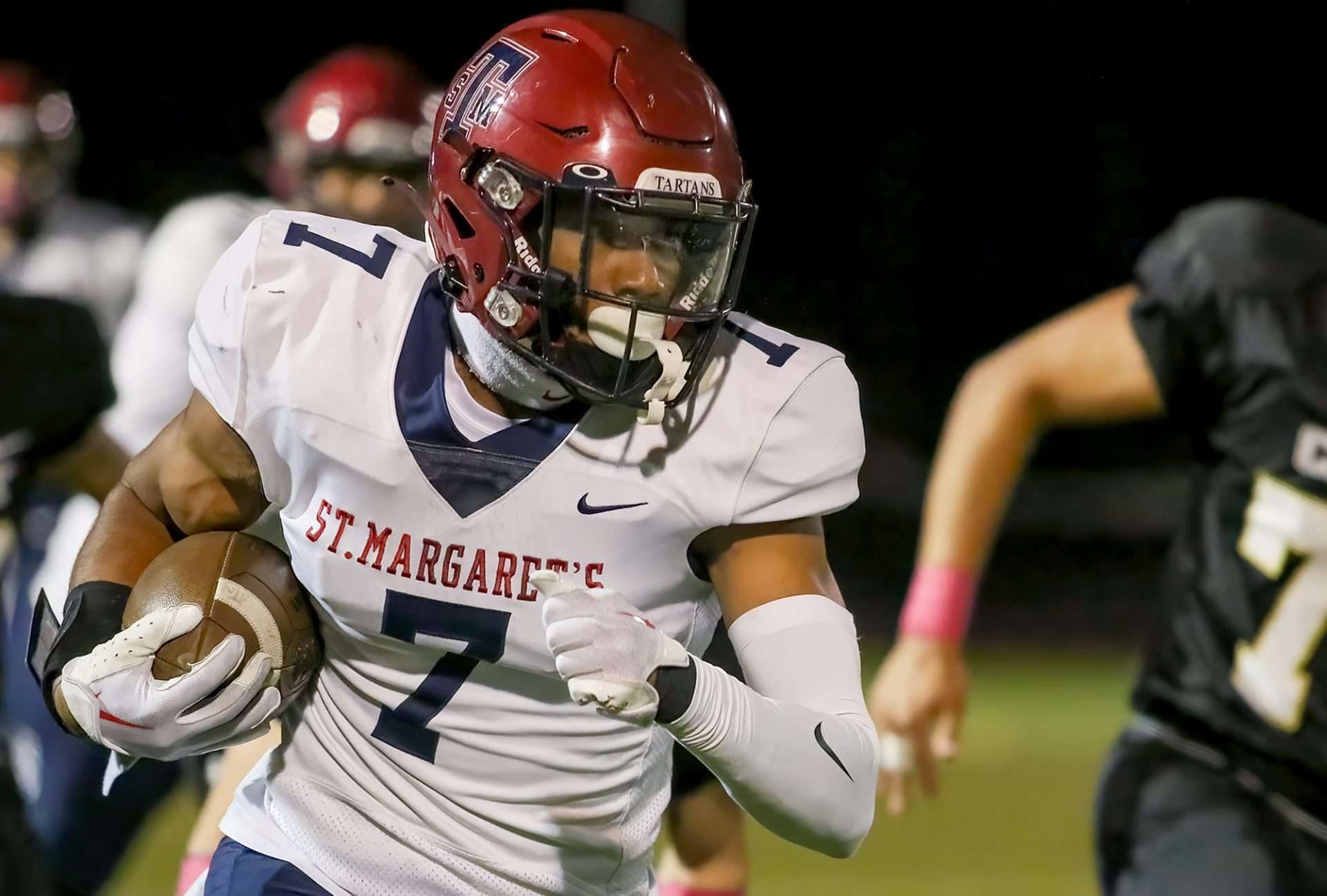 A loss would send them home and end their season.

But after a couple touchdown receptions by senior wide receiver Sam Dunnell and a pair of interceptions  returned for touchdowns, by Owen Binder and Maverick Young, the Tartans live to play another day.

A 49-22 win over the Eagles at Segerstrom High School gave St. Margaret’s an automatic playoff bid with a third place finish in the Orange Coast League.

Afterwards, coach Kory Minor expressed how proud he was of his team.

“Their fight, their tenacity, their toughness, their resiliency, it was an entire team effort across the board,”  Minor said. We are all in this together and it feels good.”

St. Margaret’s is no stranger to postseason play.

It played in the Division 9 Championship game against Colony last season that continued a streak of 18 years with a playoff appearance.

Calvary Chapel, however, wouldn’t make the path back an easy one.

The Eagles scored on their opening drive when quarterback Matthew Peters threw a 58-yard touchdown pass.

St. Margaret’s quickly answered with a big pass play from quarterback Max Ruff to Dunnell for a 67-yard pass, but Calvary Chapel once again put together the big play as Peters threw a 79-yard touchdown pass.

“There were some nerves for sure. We just needed to settle down, relax  and make some plays,” Minor said.

St. Margaret’s offense settled in once the second quarter began.

After wide receiver Derek Smith caught long pass to get inside the Calvary Chapel 10-yard line, it wasn’t long before he scored on a 3-yard end around to tie the game.

The Tartans used their momentum later in the quarter when Ruff marched his team down to the goal line and found Dunnell again, this time from two yards out.

“At the end of the day we just had to take care of us,” Minor said. “Once we are in rhythm and in sync, we are pretty tough to beat.”

St. Margaret’s didn’t waste time showing that in the second half.

Binder went up and grabbed Peters’ pass and returned the interception 94 yards for the touchdown.

On the next Tartans’ possession, Ruff took the offense to the Calvary Chapel’s doorstep, close enough for him to score on a 1-yard touchdown run.

Two more interceptions stolen by Dunnell and Young, who returned it five yards for the score led to 28 unanswered points and soon enough, St. Margaret’s knew they were headed back to the postseason.

“Every win we have just built on it,” Dunnell said. “We finally got all of our players back healthy and we really turn it up during practice so we are able to deliver on game days.”

St. Margaret’s will know where it lands on Sunday when the brackets are released. Minor said he figures his team will be in Division 11 or 12.