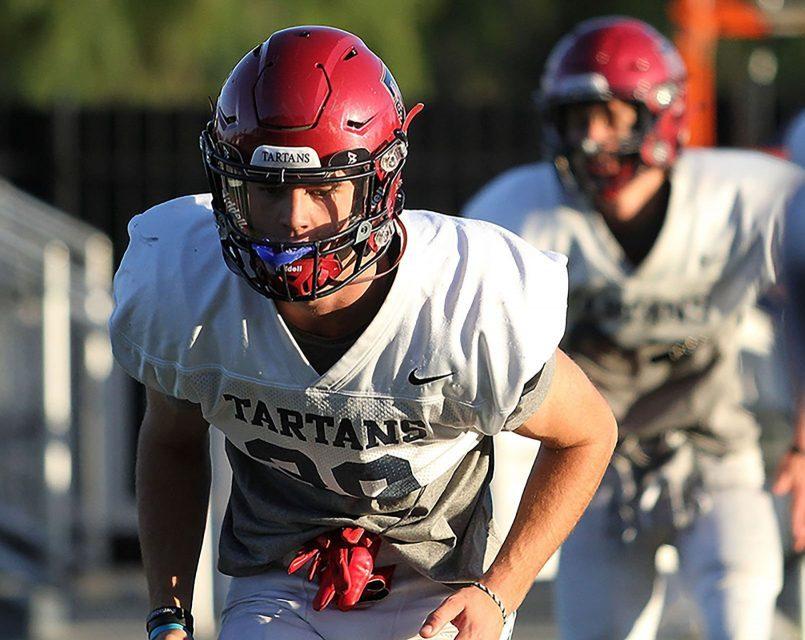 SAN JUAN CAPISTRANO — St. Margaret’s football team didn’t know for sure if it would see the playoffs this season.

The Tartans were at the mercy of the CIF-Southern Section and CalPreps after being one of seven teams that weren’t assigned to a league.

So after finding out they made it into the Division 9 playoffs, the players are making sure to savor each moment.

“I’m just trying to get every extra day of football I can,” Tartans senior wide receiver Will Stahl said. “This is the last time I’ll ever play football.”

Stahl will be attending NCAA Division I Holy Cross to play lacrosse next fall, but he has shown he still has more to prove. His six catches for 117 yards and two touchdown receptions were crucial in a first round win over Hueneme.

“We were passing the ball really well,” Stahl said. “Everyone was open and everything was working.”

St. Margaret’s has been a prolific passing team all year led by senior quarterback Jack Ruff.

But their second round opponent is the complete opposite.

The Saints are led by four players who have each run the ball for more than 450 yards during the regular season. Senior Shawn D’amato led the team with with 806 rushing yards but Jesse Samec has also has chipped in 748 rushing yards.

Quarterback Teyondre Colman has only completed 46 passes but showed his versatility rushing for 524 yards and nine touchdowns.

“They are a darn good team,’ St. Margaret’s coach Kory Minor said. “The wing-T is a tough offense to defend.”

St. Margaret’s has also shown versatility this season with the majority of its players playing both ways.

Stahl, who also plays safety, said his defense will have to be disciplined.

“You just have to be ready to get low and make tackles,” Stahl said.

The Tartans have shown it can stop the run this year holding opponents such as Skyline League Champion  Rim of the World to just 119 total yards.

But Minor said it’s not about what the opponent can do.

“At the end of the day we have to take care of us,” Minor said. “We have to do our job on offense and defense.”

St. Margaret’s has eight wins this season and hasn’t had more than four losses in a single season in more than 15 years.

“Everyone is just having fun,” Stahl said. “We are all here for one another, we all love one another and we just work as hard as we can.”