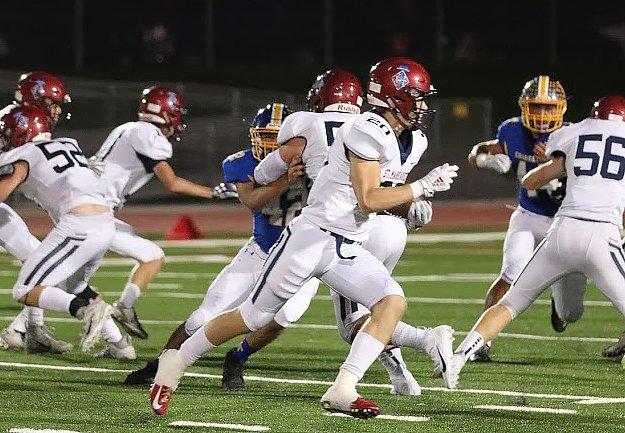 SAN JUAN CAPISTRANO — St. Margaret’s football team might only play three games this season, but players and coaches are just grateful to return to the field.

“For a school having 200 boys, it says a lot to get (a schedule) done and we are going to roll with that,” Tartans head coach Kory Minor said. “We have a lot of kids playing multiple sports, unfortunately, some have to pick and choose, but it is what it is.”

The decision came shortly after Capo Valley Christian decided to forgo its season because of the amount of multi-sport athletes it had.

For the last five years, the two schools have played each other in football but, with the closure of Saddleback Valley Christian this past summer, Minor said St. Margaret’s had to find a new league for the fall.

“No matter what happened, we were going to play.” Minor said. “Even if that meant just playing an intersquad game.”

While the closest school St. Margaret’s will play is Estancia High School, 23 miles north, Minor understands the difficulty in being a small private school in Orange County.

“It isn’t easy but, with our administration and with our parents’ support, everybody has been behind us,” Minor said.

While there are many high schools in the surrounding area, composing a schedule at St. Margaret’s level can be a challenge.

“Schools think ‘OK, we should beat St. Margaret’s , if we lose to them, it’ll look kind of bad,” Minor said. “We know we can’t play teams like JSerra and Mater Dei, and even San Juan Hills or San Clemente are too big for us. That’s why we have go to places like Rancho Cucamonga or Lake Arrowhead. We go all over the place.”

Despite a very shortened schedule, the Tartans are looking to build on a nine-win season back in fall 2019.

“It’s going to be a very young team,” Minor said.

St. Margaret’s graduated quarterback Jake Carreon, who threw for nearly 1,500 yards and 19 touchdowns, and his top target Will Kenner, who caught 14 touchdown passes.

But Minor is confident in junior quarterback Jack Ruff.

“He has played football for a long time,” Minor said. “He has been to a bunch of camps and has had a quarterback coach. He understands the game and will have a nice offensive line protecting him.”

“We want to build off our successes, but this is a group that involves a lot of teaching and coaching,” Minor said. “That’s OK, though, because I love it. Football means so much to me, and seeing these kids excited to play is phenomenal.”