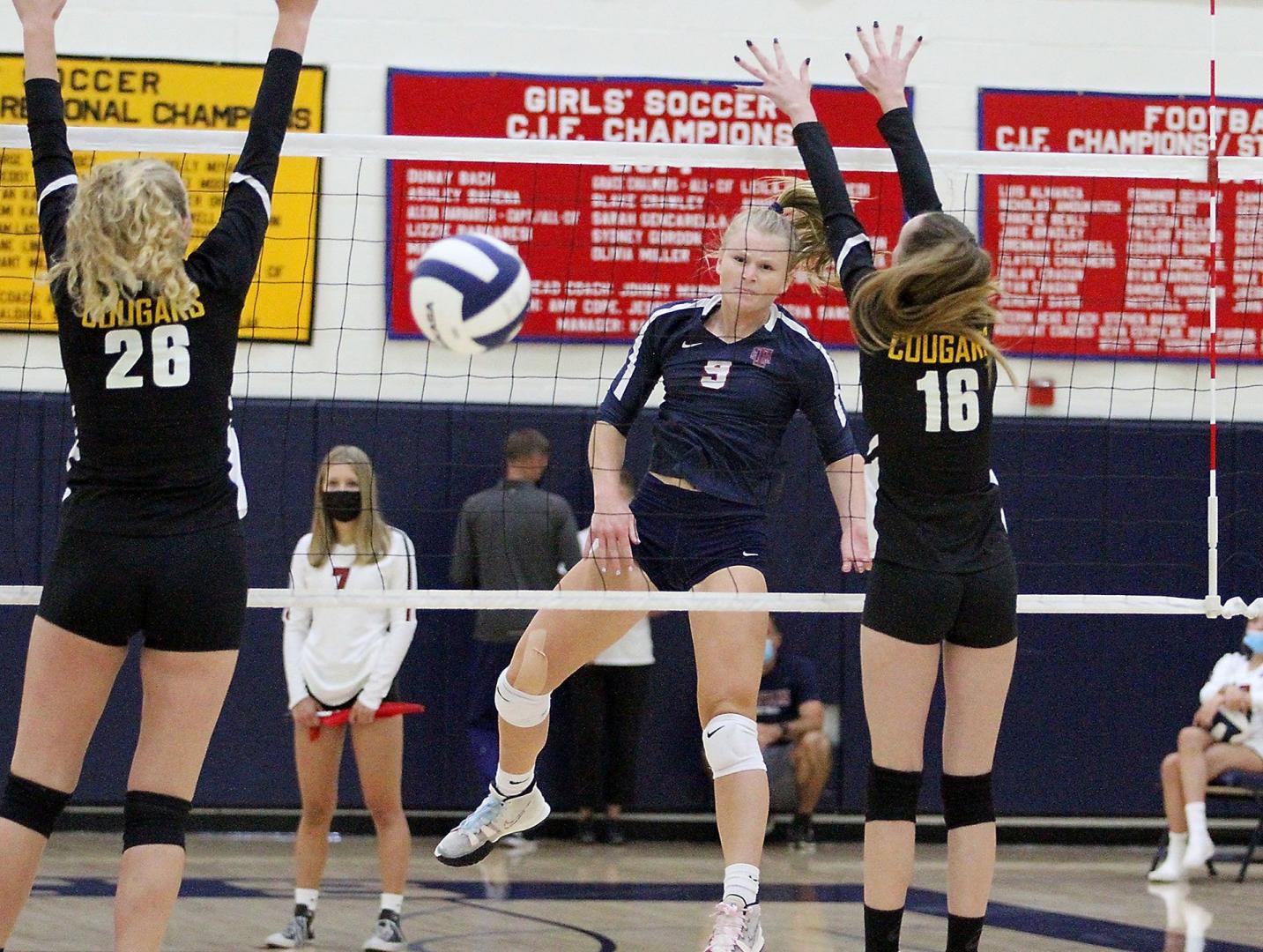 Now his wisdom is lighting a fire under his high school girls volleyball team at St. Margaret’s Episcopal School.

“It’s been really awesome,” senior middle blocker Ava Lentz said. “He’s such an amazing coach and cares so much for our team. He always says don’t worry about the score just focus on yourself and your teammates.”

Ypder grew up in San Clemente where is was a basketball player. After years of success as a college coach he returned to the area and was hired this past June to coach girls and boys volleyball.

“It’s different,” Yoder chuckled, talking about coaching high school instead of the college level. “But it’s also the same. You are trying to teach these players, figure out the best system for these players, and create a cohesive team.”

St. Margaret’s showed cohesion against the Cougars early in the first set.

The combination of Lentz and junior outside hitter Brady Moseley stifled Capo Valley. It wasn’t before long that Lentz scored on four consecutive aces and the Tartans held a 11-3 lead.

“Our serving has been up and down but it was really on this game,” Lentz said.

St. Margaret’s finished with a total of 15 aces.

The Cougars cut into their deficit with some scores by Keira Tanioka, Mackenzie Levene and Delaney Adan but the rally didn’t last long.

Kills by Nikki Swensen pushed St. Margaret’s even further out in front and Moseley sealed the first set with her first ace of the night.

Moseley’s momentum and confidence grew even more throughout the second set.

By the time she had four kills, the Tartans held a 10-2 lead. She added a couple of aces and they were ahead 13-2.

“Brady is a really solid outside hitter,” Yoder said. “She hasn’t had the opportunity to play the entire rotation on her club team so she is still developing as a passer but so far so good.”

Junior middle hitter Eileen Sadati also helped out with a few kills and St. Margaret’s was well on its way to a 25-18 set victory.

The Tartans didn’t waste any time putting the third set away as it started on a 9-1 run.

Capo Valley’s offense came in the form of Ava Lang who scored two kills, but St. Margaret’s didn’t let up.

It’s eight-point lead eventually turned into a 21-8 lead after a block by Lentz and the Tartans cruised to a 25-10 win.

“Our defense was really solid tonight,” Lentz said. “Our offense in the first couple of sets was rough and we were able to pull through it.”

St. Margaret’s finished its last full season in 2019 with 21 wins and a trip to the CIF-Southern Section Division 3 tournament.

The Tartans want to return but Yoder knows his team is still developing.

“I eventually want to play a little faster,” Yoder said. “The good thing about a fast set is that your opponent doesn’t have time to think.”

St. Margaret’s next gam will be a match at Dana Hills on Sept. 1 while Capo Valley will travel to Capo Valley Christian on Thursday.