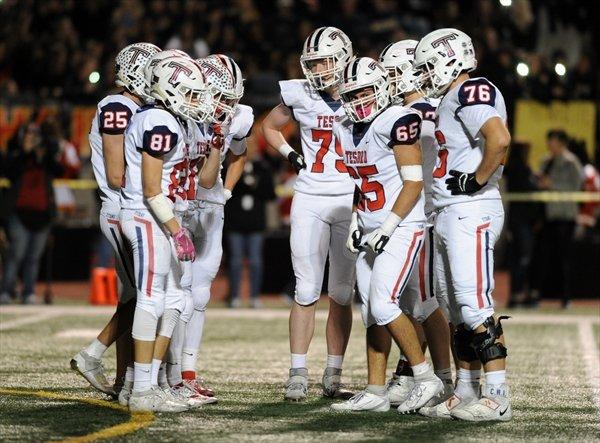 Members of the Tesoro football team await a play during a game against Mission Viejo on Nov. 9, 2019. The Titans and their coach Matt Poston are looking forward to returning to the field. (Ming Chung Lin, Maxpreps.com)

The seventh-year coach returned to the program three weeks later and led the Titans to a 10-2 overall record. Tesoro won its first nine contests of 2019 but fell to eventual South Coast League champion Mission Viejo 44-14 and ultimately lost to Alemany in the second round of the playoffs.

Poston is ready to take on COVID-19’s health risk, however, as the Titans play their first contest in 490 days on March 19, when it hosts Aliso Niguel in the season opener.

“Since then, everything has been good,” Poston said, who’s getting the COVID vaccine next Sunday. “I’ve made all the progress I’m supposed to and had my check ups and everything is going as it should be.

“In terms of COVID, I think I’m doing what everybody else is doing, when I’m near people I have my mask on, I’m trying to avoid situations where there’s lots of people. At the same time, I have a job to do as a teacher and a coach.”

“As you can imagine we’re thrilled to be able to play,” Poston said. “These kids have been working so long, so hard, that to get the opportunity to put the helmet and shoulder pads on and go out there against another team — whoever it is — is just really exciting.”

Stepping into those defensive end positions will be seniors Jason Baum and Chris McCarty. Baum, a 6-foot-3, 225 pounder, played defensive tackle alongside the 32-sack combination of Gallaway and Hurst in 2019.

“I was really good friends with Cooper and Ethan during the whole season and I played a lot of defensive tackle because those two were absolute studs at the defensive end position,” Baum said. “I learned the power moves from Hurst and the speed moves from Cooper Gallaway. I’m trying to bring both of them together and just really bring out my game to the next level.”

On the other side of the trenches, senior Marc McGill will be starting his second consecutive campaign under center.

“We’ve got to take care of our big boys and Marc is as good as they come at the center position,” Poston said of his 6-2, 250 pound big man. “He’s an absolute bulldog and does a great job leading for us. He’s been at that center spot for quite some time.”

Poston did not say, however, who the Titans’ quarterback would be.

Junior Luca Carney and senior Reubin Kim are the only returning quarterbacks combining for 75 yards on 8 of 16 completions and one touchdown.

The Titans are only returning around three starters on each side of the ball, Poston said.

“We ended up winning 10 games and a lot of that was because of the senior class,” Poston said. “We’ve had a junior class that’s paid their dues, is ready and excited to take those positions, which are now open.”