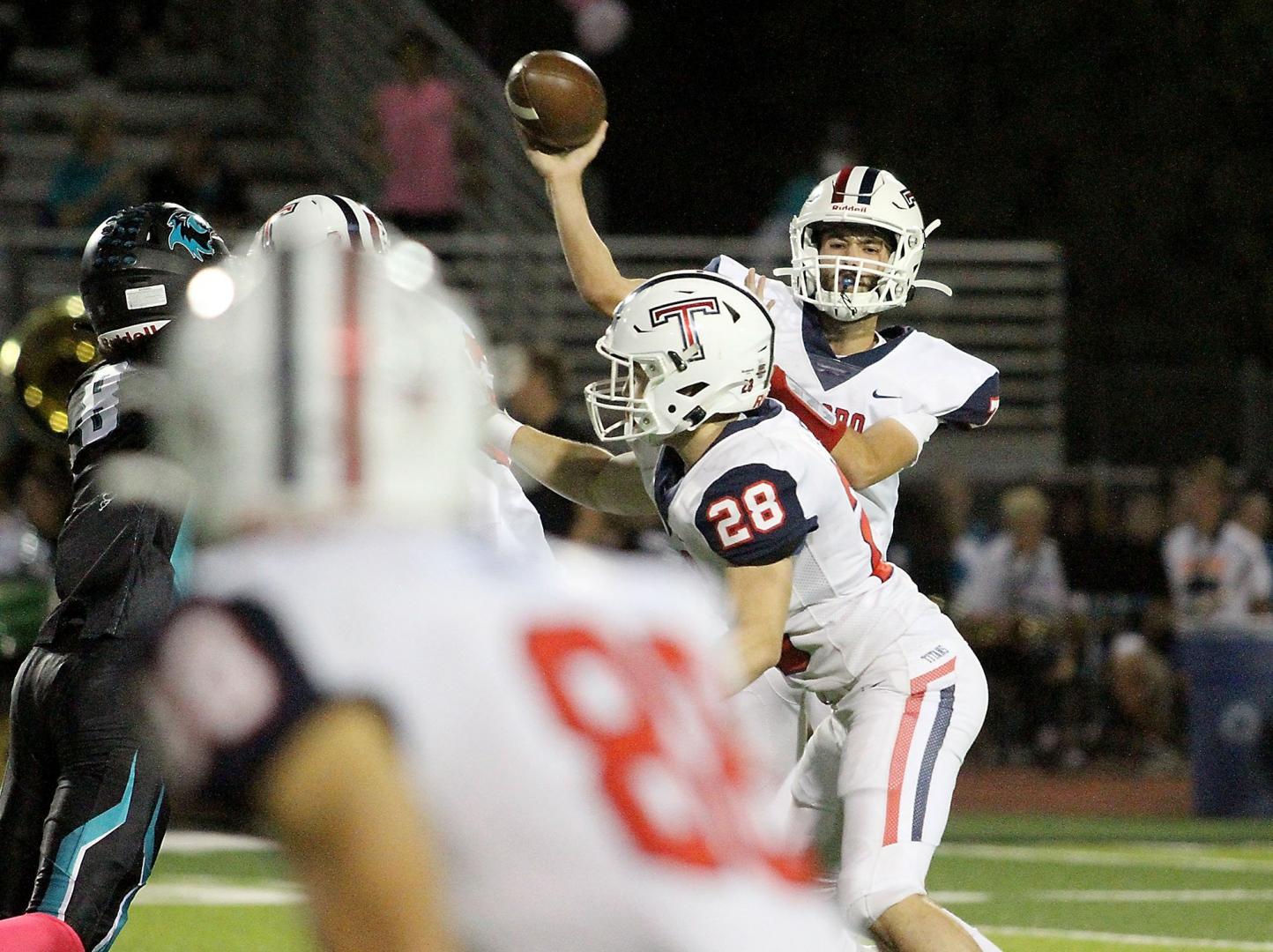 The Titans had just one win in their last five games.

But it left with some much needed momentum.

Tesoro made big plays on both sides of the ball as it defeated the Wolverines, 38-21.

“Hopefully this can kind of flip the switch for us,” Titans coach Matt Potson said. “Losing four in a row is hard on the kids, it’s hard on the coaches. It’s hard on everybody. To get a win like this feels good.”

The defense also made a big play when junior free safety Mikey D’amato picked off Aliso Niguel quarterback Shaun McCaghren and returned it 46 yards to the Wolverines’ 7-yard line.

It was there that quarterback Gavin Shaigineik threw a touchdown pass to Matt Cole to grab ahold of a 10-0 lead.

Shaigineik came back and threw another touchdown pass midway through the second quarter.

He entered the game completing just 45 percent of his passes but started the first half converting four of his six passes.

“He played well,” Potson said of Shaigineik. “He made some key throws when he had to.”

While the Titans’ offense was orchestrating a successful attack, Aliso Niguel was answering nearly every score.

Senior running back Chase Christner scored on a 3-yard run late in the first quarter and then McCaghren threw a 3-yard touchdown pass to Robert Brauer.

The difference in the half was the Titans’ opening field goal as they entered the locker room holding a 17-14 lead.

Tesoro turned up the intensity in the third quarter.

Senior running back Lucas Pesak led a 54-yard opening drive that ended with his 3-yard run.

Three plays later D’amato came away with his second interception that he brought back to the 5-yard line and set up Pesak’s second touchdown run.

“”He brings a lot of energy,” Potson said with a smile. “He makes some really big plays.”

The two teams exchanged touchdowns one last time during the third quarter that featured Shaigineik throwing his third touchdown pass on a 16-yard lob Nelson in the back of the end zone.

Shaigineik never threw three touchdown passes or finish a game without an interception thrown. Against Aliso to go along with 179 passing yards.

“I just kept it simple and it all worked out,” Shaigineik said.

The Wolverines had chances to cut into the fourth quarter deficit but just couldn’t find ways to score.

The offense stalled at the 3-yard line and turned the ball over on downs and later in the quarter McCaghren threw another interception that was caught by DeMarco Love.

Aliso Niguel will enter its bye week before starting Sea View League play on Oct. 15 while Tesoro will return home to face Trabuco Hills next Friday.

The Titans have never lost to the Mustangs in school history so the players agreed that it was a perfect time to turn their season around.

“The pride of Tesoro is hard work,” D’amato said. “We worked hard and came out with a big win. You can’t ask for anymore than that.”