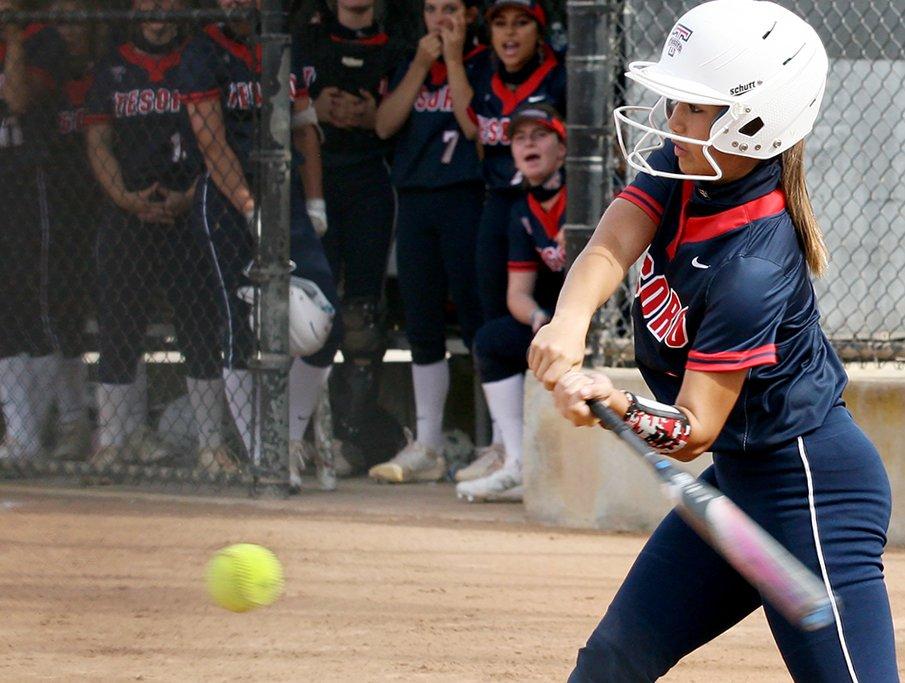 And it left feeling confident in itself.

The Titans finished with 14 hits as they crushed Dana Hills 12-2 for their second win of the season.

“I really feel like this was a good win for us,” Tesoro coach Leena Blake said. “We just haven’t been making the necessary adjustments at the plate, but today we did. I’m proud of them.”

The Titans jumped on Dana Hills with an early run in the first inning but really started to pile the runs on in the third.

After capitalizing on a fielding error by Piper Tago, center fielder Jenna Nelson laced a single to left field to drive in two runs.

One inning later, Tesoro kept piling on the runs when Taylor Johnson singled and Nelson came to the plate and singled again, this time to right field.

“I just had my timing down today and waited for the ball,” Nelson said.

While the coronavirus pandemic has affected every team in the CIF-Southern Section, Blake said it really made a personal impact on her team.

“The pandemic really effected this program, and a lot of girls didn’t come back (to play), so my roster is pretty slim,” Blake said. “Some just decided not to play and they got a job or whatnot and some are playing other sports.”

Senior third baseman Amanda Morris was one of the players who returned and is taking advantage of her final season wearing a Titan uniform.

She finished with a pair of doubles and 2 RBIs and said the key to her clutch hitting was staying relaxed at the plate.

“I was just looking for a pitch to drive,” said. Morris, who has committed to Seattle University.

Dana Hills managed a pair of runs of its own in the third inning, but that was the only trouble that Tesoro pitcher Avery Relph found herself in.

Over the final four innings, she allowed just four runners to reach base.

She might not throw the hardest in the Sea View League, but her change of speeds and her drop curve kept the Dolphins from establishing any timing.

“I focus on trying to make the hitters  hit weak ground balls and rely on my defense behind me,” Relph said. “My teammates are really good at backing me up.”

Tesoro scored a run in the sixth inning and three more runs in the seventh, including a pinch-hit, inside-the-park home run by Kamden Cisceros.

The Titans’ will continue their season when they face Mission Viejo on Monday and, while they scored their most runs since a win against Laguna Hills in February 2019, Blake still wants more consistency from her players.

“The girls just play better when the energy is up and we have momentum on our side,” Blake said. “It’s important.”

As for Dana Hills, the Dolphins have lost three straight games and will not play against until April 13 against San Clemente.

Dana Hills coach Brandon Cosenza was not available for comment following the game.