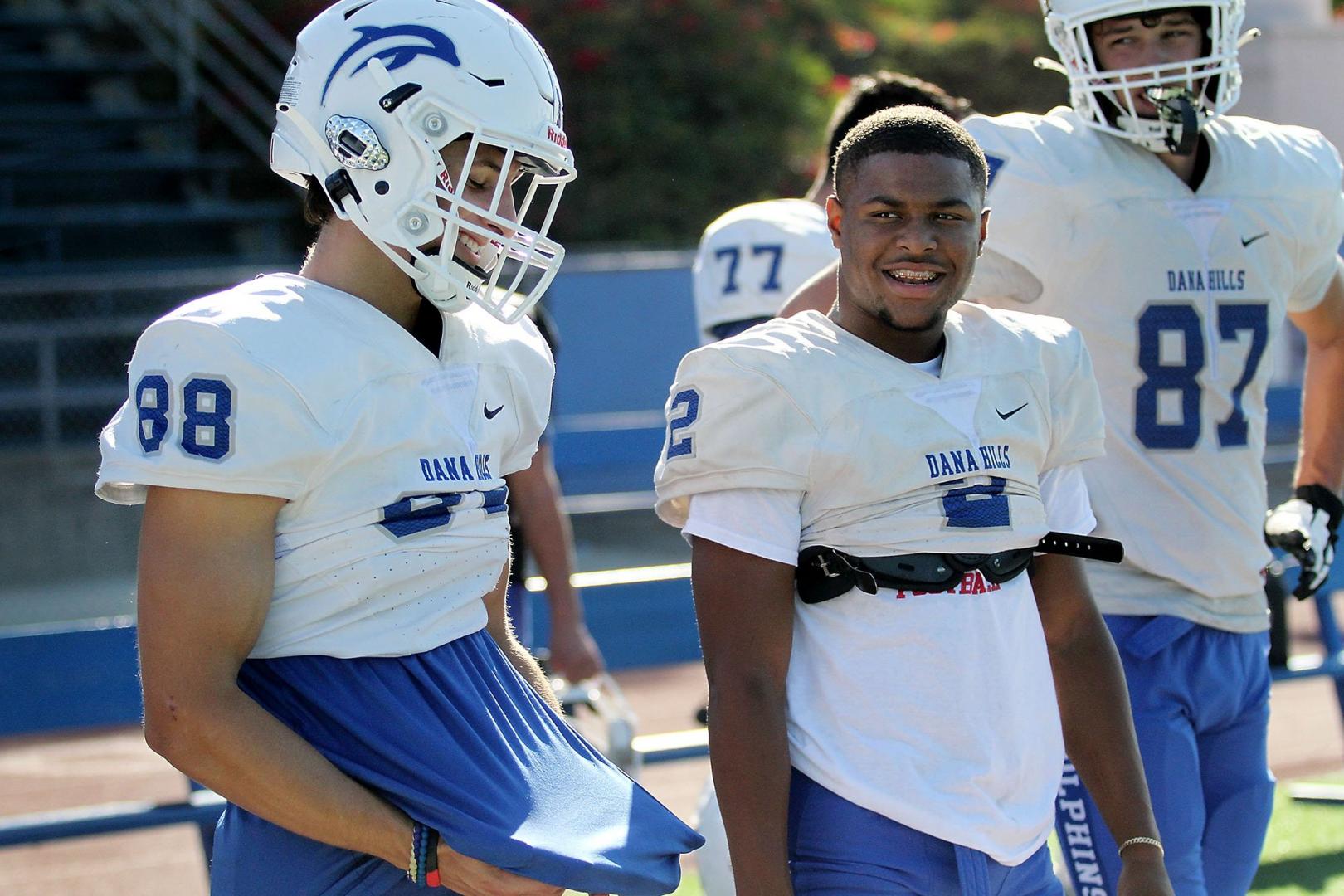 Dana HIlls wide receivers Owen Chambers (88) and Omar Black interact on the sidelines during a high school football practice in Dana Point, Sept. 2, 2021. Chambers and Black both transferred into Dana Hills and lead the Dolphins with six touchdown catches a piece this season. (Ryan Kuhn, SOCoPrepSports.com)

DANA POINT — Every football team has a top receiver.

Together, the pairing of senior wide receivers Omar Black and Owen Chambers has led the Dolphins passing attack all season.

“It’s nice. Both are so effective,” Dana Hills quarterback Bo Kelly said. “Two guys like that, the experience they have, obviously the threat they have makes it hard for defensive coordinators to game plan against.”

Not only do two receivers share the lead with six touchdown receptions apiece, but their journeys parallel each other, both coming from schools who have a history of successes on the football field.

He said it was a hard decision, but he wanted to better himself and play his junior year.

While he might have been fighting for catches with Mission Viejo’s senior receiving core, highlighted by Mavin Anderson and Josh Welles, Black transferred over to Dana Hills, where he was selected first-team all-league and led the Dolphins with seven touchdown catches.

“It helped my career a lot,” said Black, who also had 384 receiving yards in five games last season. “We have a good quarterback over here and it got my name out there with the season we had.”

This season, Black quickly returned to form, catching two touchdown passes against Laguna Beach in week  and having a breakout game against Trabuco Hills where he finished with 136 receiving yards.

This past offseason the Dolphins received news that Chambers was also transferring in.

He played five games for JSerra during the spring pandemic season, including catching a pair of touchdowns passes, but realized it wasn’t the right fit.

“I just wanted a new atmosphere,” Chambers said. “I heard what was going on over at Dana and I knew I wanted to be a part of building their program.”

Much like Black, it didn’t take long for Chambers to make an impact. He describes himself as a playmaker who can be explosive, and it showed in his first three games.

He caught a 25-yard touchdown against Laguna Beach to start the season and then two weeks later finished with a career night against Aliso Niguel catching four touchdown passes.

Not only has their statistics been noticeable but also how teams have tried to defend the Dolphins passing attack.

“Laguna Beach played us straight up, then a couple other teams tried to rake away Omar but then this week against Woodbridge they came out and triple-teamed Owen,” Kelly said. “When you have those two weapons along with the rest of our receivers, we can be really scary.”

Not only has the receiving duo been turning heads on offense, but both have prior experience playing in the secondary and both take pride with their defense.

“Playing on both sides of the ball makes me diverse,” Black said. “It opens up more options for scouts to look at. I’ll do it all: kick return, punt return, anything they ask me to do.”

Both know they want to play football at the college level, but they don’t know exactly know where yet. They know that decision will come soon but now they are focused on finishing their career winning a Pacific Hills League title and sending the Dolphins to the playoffs for the first time since 2013.

“We want to put Dana on the map and make it bigger,” Black said. “We just need to work harder and make us better all around.”

Dana Hills’ most notable receiving record in a single season is 948 yards by Dylan Denso in 2008. Both Chambers and Black are on pace to threaten it, the only question is, which player will do it first?

They jokingly compete to see who can catch the most passes, but only time will tell.

But Black butted in.

“You can’t stop both of us,” Chambers said with a smile.