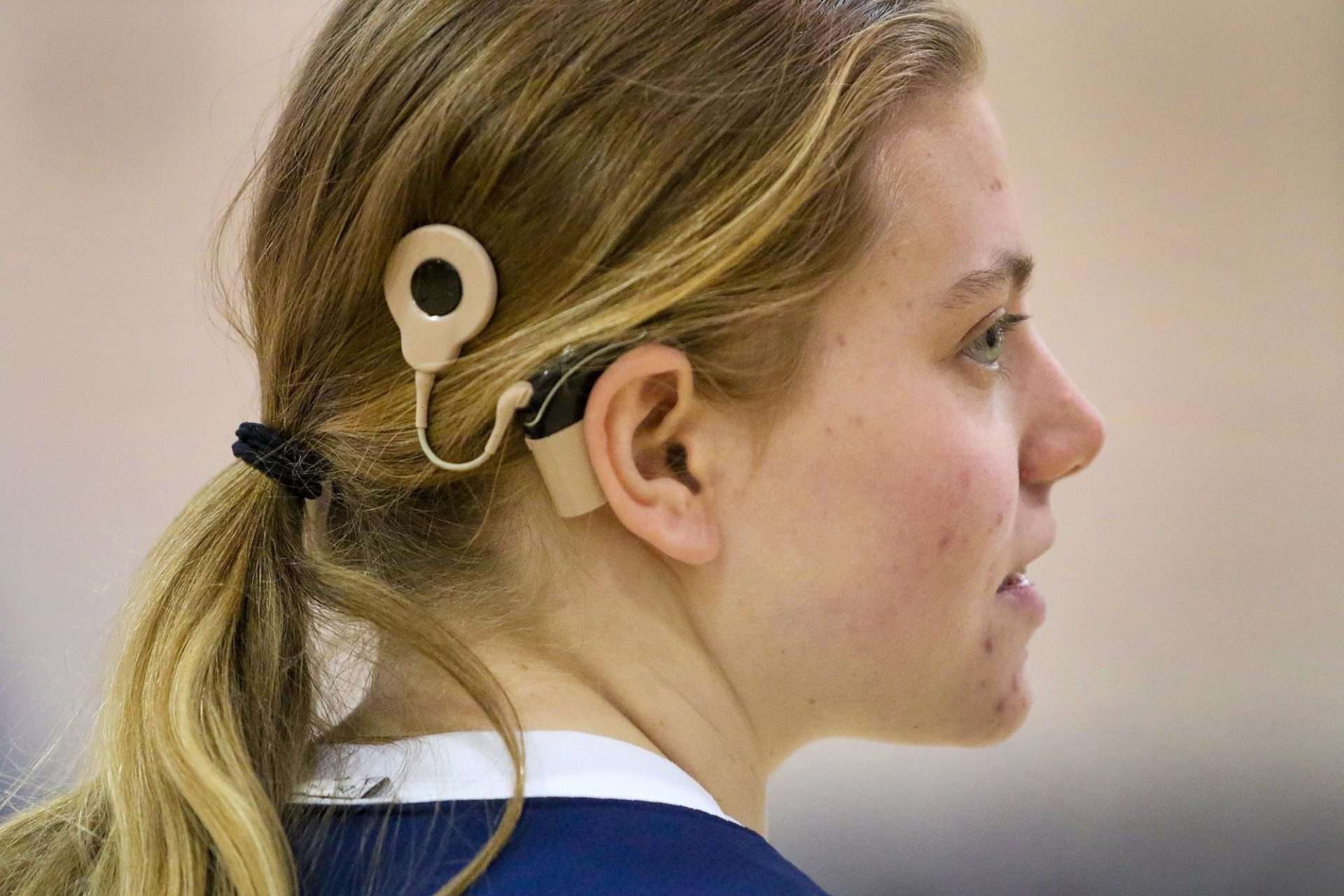 Harper Gideons looks on during a high school basketball practice at St. Margaret's Episcopal School, Jan. 21, 2023. Gideons wears cochlear implants because she was born with

This article is free but donations are appreciated.

SAN JUAN CAPISTRANO— Harper Gideons races up the basketball court with her teammates on a fast break.

She can hear the roar of the crowd filling the gymnasium as she picks up the pace.

The referee across the court blows his whistle signaling a time out.

Gideons, a sophomore guard for St. Margaret’s Episcopal School takes a seat on the bench and listens to her team talk strategy.

While most players might take these sounds for granted, Gideons has a different kind of appreciation.

Without the assistance of cochlear implants and a hearing aid, she would be mostly deaf.

Gideons was born with Pendred Syndrome.

According to the National Institute on Deafness and other Communication Disorders, almost all children with the genetic disorder have bilateral hearing loss, meaning hearing loss in both ears.

Her older brother, Battle, was diagnosed after he was born almost two years before Harper.

“The hearing loss is caused by enlarged vestibular aqueducts,” said Valli Gideons, Harper’s mother. “What’s unique is that the hearing fluctuates. When you have an infant whose hearing can fluctuate, it’s very tricky, because hearing aids are digitally programed and matched for loss. When you know that hearing is going to fluctuate, and you have a baby that can’t articulate, it’s impossible to know if it’s working.”

The Gideons instead chose to help their children with the use of cochlear implants, which work differently than hearing aids.

“Sound is picked up by a microphone in the processor and is converted into a digital signal that is sent through the skin and converted into an electrical signal by a computer chip implanted on the skull,” said Joan Hewitt, a pediatric audiologist in Encinitas, Calif. who has treated Harper for the majority of her life. “Then it is sent back down to the inner ear that can recreate the sound.”

Hewitt said cochlear implants were first approved for children in 1990 but did not come into the mainstream until 10 years later. Now, more than 65,000 children have the ability to hear with the device.

“They have completely changed what we can do,” Hewitt said. “I don’t think people understand how difficult it is to hear the communication that happens on a basketball court. We know how noisy the game is. Adding a cochlear implant and a hearing aid would make it five times harder to hear just what you want to hear and not all the noise around. The fact that she plays at such a high level says that she has an amazing sense with her technology and the game itself.”

Gideons received her first cochlear implant just before her second birthday. Not long after that, she was picking up a basketball. 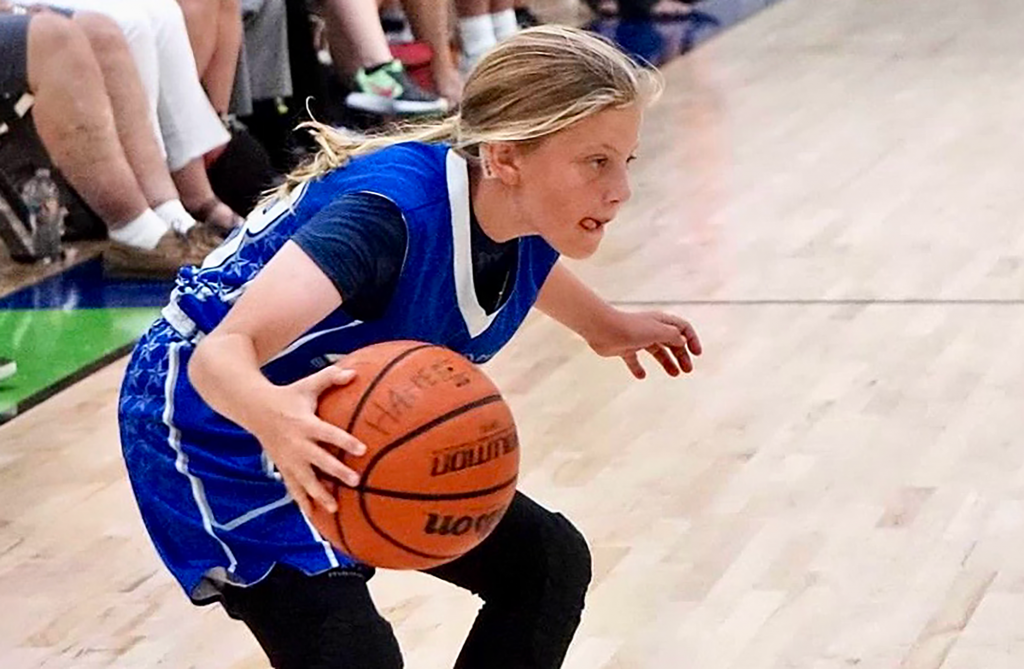 A young Harper Gideons looks to pass while playing on her club basketball team. Gideon’s started to play basketball on club teams around the third grade. (Contributed by the Gideons Family)

Finding her love for basketball

By the third grade, she had moved with her family to California from Florida and started playing club ball. She loved it.

“My brother played, and I wanted to do everything he was doing,” Gideons said. “I played everything, but basketball just stuck with me. I like scoring points.”

With the encouragement of her family and her first club basketball coach Shafiq Chatterjee, she found her heaven on the basketball court.

But there were still challenges.

“When you go to these big tournaments or where there are multiple games going on at once, it’s hard to hear if the coach is calling a play or a ref is calling a foul,” Gideons said.

Gideons went through speech therapy as a child while learning to adapt to cochlear implants. She said she is very good at reading lips but also looks for hand signals while on the court.

“It’s a lot easier than you might think,” second year Tartans coach Josh Markum said. “She has great instincts because she has played for so long. If she doesn’t hear or see something, she will just come up to me.”

Of course, there are times where her implants can malfunction. Luckily, they are easy to remove when necessary.

“We were in a tournament against Woodrow Wilson and I couldn’t hear the entire game,” Gideons said. “I know what I’m doing on the court so, I manage, but it’s difficult.”

Now, having doubled its win total, Gideons is just one piece to the team’s success, and her energy and drive is nothing but contagious on the court.

“When she arrived last year it was a blessing for our program,” senior Natalie Roby said. “Her talent is really inspiring because she is just a sophomore, and then, if you add her story, watching her conquer those things pushes us to work harder.” 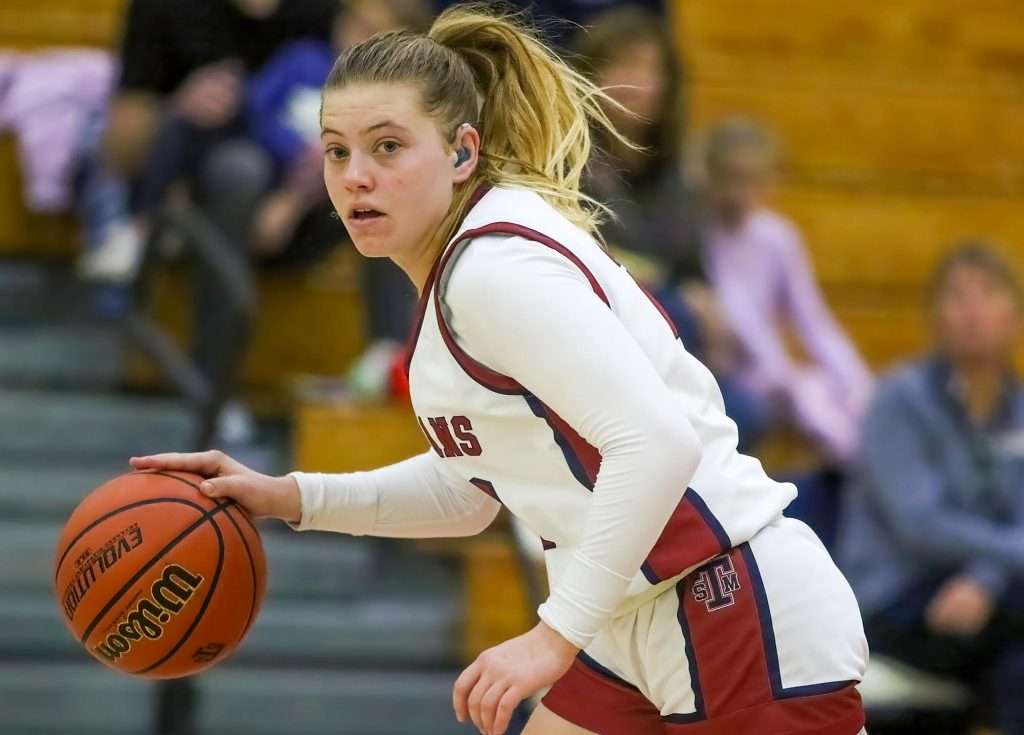 Gideons is just 15 points shy of 500 points. She will have the opportunity to eclipse that mark on Tuesday against Orange Coast League rival Calvary Chapel.

Her ultimate goal is to score 1,000 points in high school, graduate and play in college. She knows she has improvements to make in her game. This once strictly outside shooter is learning to be three dimensional.

But whether on or off the court she also wants to share her story.

Gideons and her mother wrote a children’s book titled “Now Hear This: Harper Soars with her Magical Ears” that was published and has sold thousands of copies on Amazon and other websites. Over the years they have done book signings and lead outlaid to classrooms.

Gideons isn’t embarrassed about her cochlear implants. In fact, she embraces them. Nothing will stop her from playing the sport she loves.

“I was asked to write a journal entry in the fourth grade. The prompt was ‘What makes you unique?’” she said. “I’m unique because I’m deaf.”