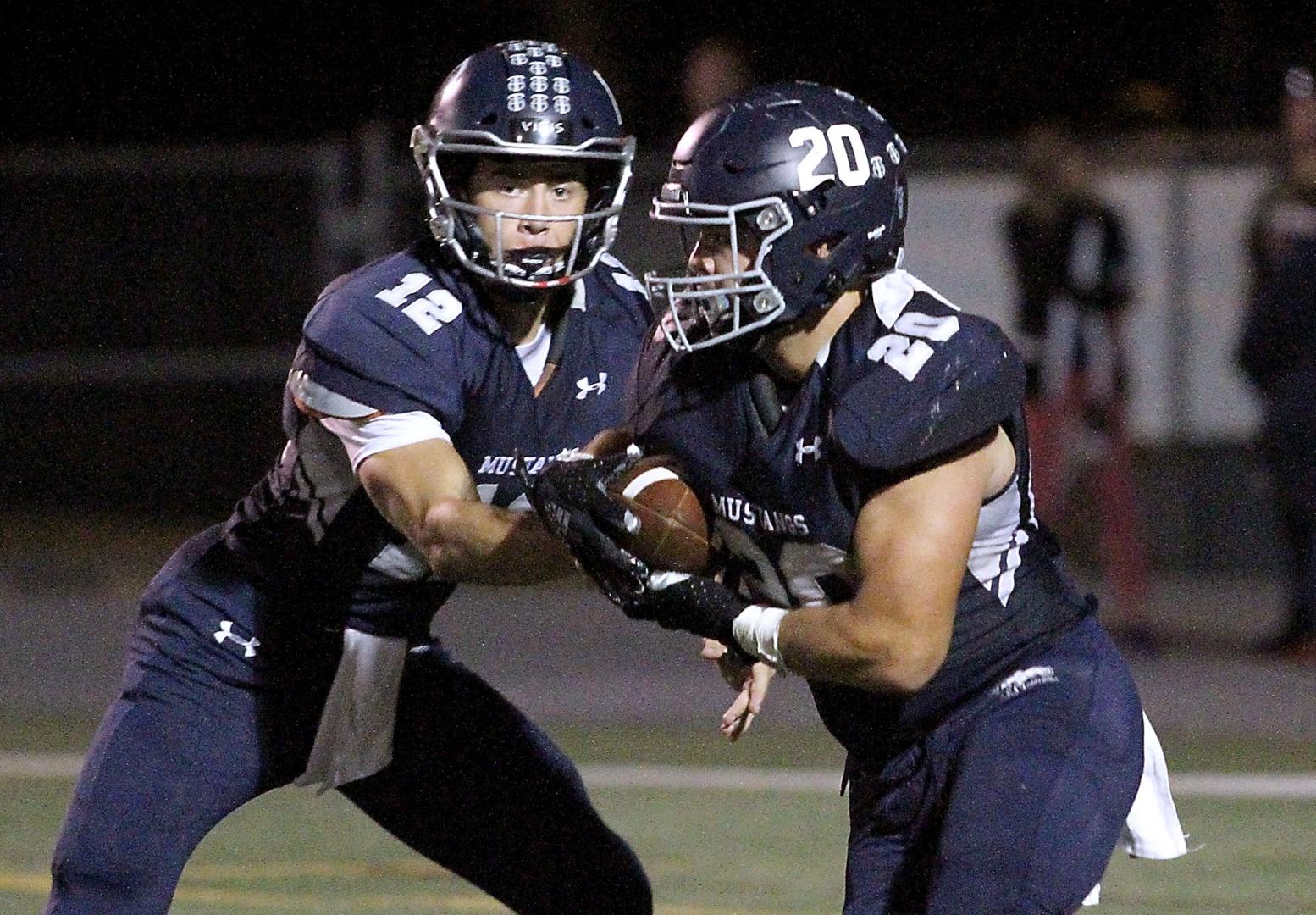 MISSION VIEJO — Trabuco Hills’ football team might not have the best start, but it sure ended well.

The Mustangs looked up at a 13-0 deficit with about five minutes left in the first quarter, but battled all the way back to come away with a 23-13 win on Friday night over Newport Harbor in front of their home fans.

Trabuco Hills (3-1) started the game with a turnover on downs deep into Sailors territory that ended with a 6-yard touchdown run by Payton Irving.

The Mustangs fumbled on their next set of downs that quickly led to quarterback Nick Kim throwing an 8-yard touchdown pass to McKay Ketchum.

“Sometimes I get emotional and I made a rash decision,” Trabuco Hills coach Mark Nolan said. “That’s on me and I told our layers, sometimes you have to overcome your coaching.”

And they did, with some big plays like in previous wins.

Barrett ran for a pair of 60-yard runs in the second win over Dana Hills.

This time sophomore receiver Ben Holland caught a 54-yard touchdown reception that was the start of a comeback.

Despite the touchdown, the Mustangs still left opportunities on the doorstep including a turnover on downs inside the redone and the Sailors sailed into half time with a 13-7 lead.

Trabuco Hills kept the game within reach during the third quarter and its defense made some key stops.

A Newport Harbor punt, eventually led to a five minute drive that ended in Trabuco ‘Hills making a field goal.

But the biggest stop came when the defense rose up and blocked the Sailors’ field goal attempt with just over nine minutes remaining in the game.

Senior Nick Perez then took the blocked punt and ran 95-yards alongside Newport Harbor’s sideline and into the end zone.

It was the Mustangs’ first lead of the game.

“I saw there was a clear path and just took advantage of it,” Perez said. “I ran full speed and took it to the house.”

Trabuco Hills not only took ahold of the momentum, it made sure to run with it.

Barrett broke through a hole for a 48-yard touchdown run that would give his team a two-score lead with just over three minutes remaining.

“I have to thank my offensive line and tight ends,” said Barrett, who finished with 139 rushing yards and a touchdown. “They were the ones who gave me that hole to run through.”

Newport Harbor (1-3) tried for a comeback but quarterback Carson De Avila came in and threw an interception in the end zone that handed Trabuco Hills the game.

“I can’t say enough about our guys on special teams, on defense, and our offense just plugging away,” Nolan said. “I could just go on and on about these players.”

Trabuco Hills will not have to take their momentum too far over the next few weeks.

Its next two games will be at home against first Segerstrom on Sept. 24 and then Chaffey on Oct. 1