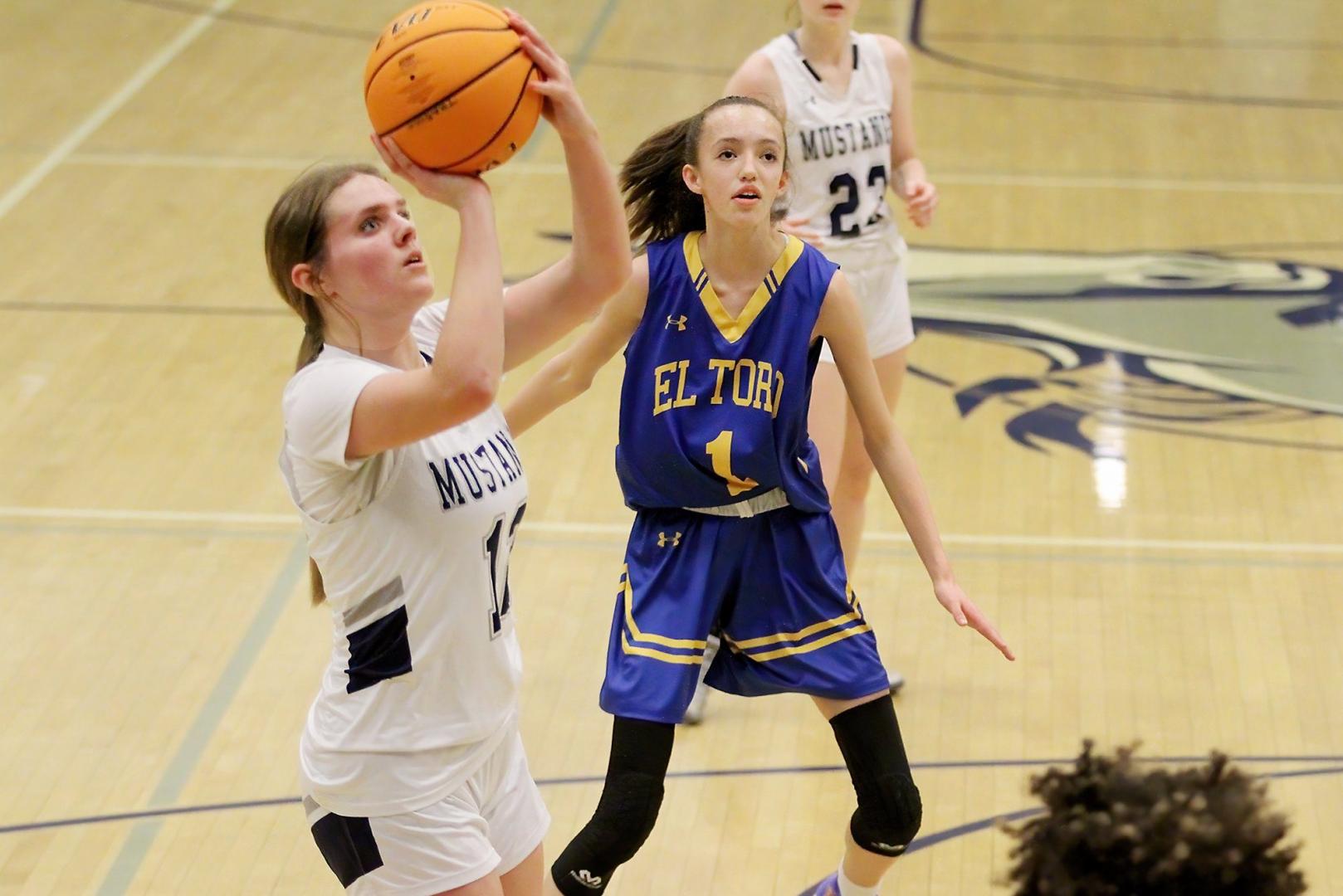 MISSION VIEJO — A new year can bring new life to a basketball team.

Following a dismal December with just two wins, the Mustangs turned themselves around and now sit all alone atop the Sea View League standings.

Their latest feat was a 56-49 comeback win over rival El Toro.

“Lately we have just fallen off a bit with our intensity on defense, but today we changed that,” Mustangs coach Calvin Mackey said. “I give these girls all the credit.”

El Toro had also sputtered at the end of the calendar year, losing seven out of its last nine games, but jumped out to an early lead.

Freshman guard Bridget Boyd entered the game as the Chargers’ leading 3-point shooter with 32 made shots and showed why.

She nailed two from the wing and El Toro held a 17-11 lead after the first quarter.

In the second quarter, Trabuco Hills’ defense showed up.

The Chargers were held to just two field goals and the Mustangs’ offense took advantage.

Senior guard Suzu Seko stepped up and hit a 3-pointer and then senior Isabella Carrido scored inside with just under three minutes left in the first half to take their first lead.

Seko added another 3-pointer and the Mustangs held a 26-21 lead and momentum entering halftime.

“When we can get contributions from everyone, we are a really strong team,” Mackey said. “We are very similar to El Toro in that way.”

The Chargers stayed close throughout the third quarter but couldn’t stop junior forward Ashlynn Kennett inside.

El Toro got within a point when Boyd hit her fourth 3-pointer, but Kennett responded with some big shots of her own.

Last spring Kennett and Trabuco Hills was swept and win all three games by double digits. This year would be different.

“Our effort helped us so much tonight,” said Kennett, who finished with a team-high 15 points. “We wanted this game.”

El Toro tied the game with three minutes left in the game, but Trabuco Hills did not lay down.

Skyla Jones stepped up with a key three-point play in the final minute and Asia De Lorez came up with a steal with 20 seconds left to seal the game.

While Kennett led the scoring, Seko finished with 13 points and Carrido added 10.

“This was a great win,” Mackey said. “This was a win that affirms we can beat El Toro. They are young but they can shoot the ball lights out and I know how good they are.”

El Toro will now regroup as they have two road games against Capo Valley and Mission Viejo and then return home to a rematch with Trabuco Hills on Jan. 18.

They outplayed us tonight. They were a lot more physical and a lot more aggressive on both ends of the court,” Chargers coach Pat Nunez said. ““We just need to watch film and get better.”