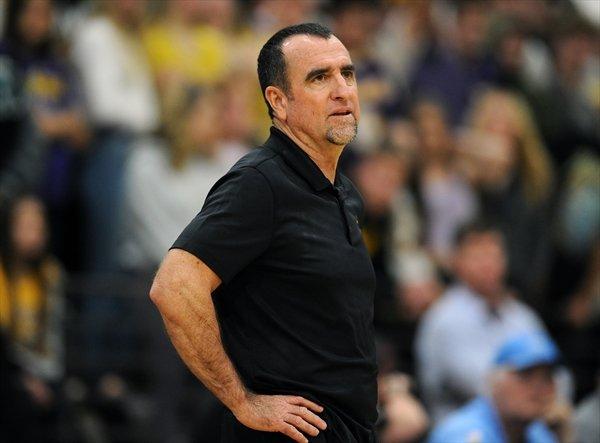 Capo Valley boys basketball coach Brian Mulligan looks on as his team takes on Aliso Niguel High School. Mulligan is entering his 26th season with the Cougars and from day one he has peached defense with his players. (Ming Chung Lin, MaxPreps.com)

His players were playing a simple 5-on-5 half-court game.

Mulligan stopped play and made a comment about the defense.

At the end of practice, he once again brings up defense and its importance going forward. He reminisces about a game six days ago, when it was defense that held Beckman to 12 first-half points.

“If you can defend and you can do it the way we want it to do it, you are going to have a good experience here,” Mulligan said.

That’s because defense has a trademark for Capo Valley boys basketball.

Mulligan was raised in a basketball household.

Bill Mulligan’s up-tempo style of play was iconic around Orange County, as he coached the Anteaters to 163 wins between 1980 and 1991.

But, as much as he looked up to his father, Brian Mulligan admitted he also admired another team in the conference.

“Fresno State had these phenomenal defensive teams where it would just lock down its opponent, and then, on offense, it would hold the ball,” Brian Mulligan said. “There was no shot clock, so they would use a minute and a half per possession.

“My dad used to call it vomit basketball.”

Brian Mulligan laughs about it now. For the past 26 years, he has created his own legacy as the head coach of Capo Valley High School, winning a CIF-SS Championship in 2017, all with a defensive-first mentality. 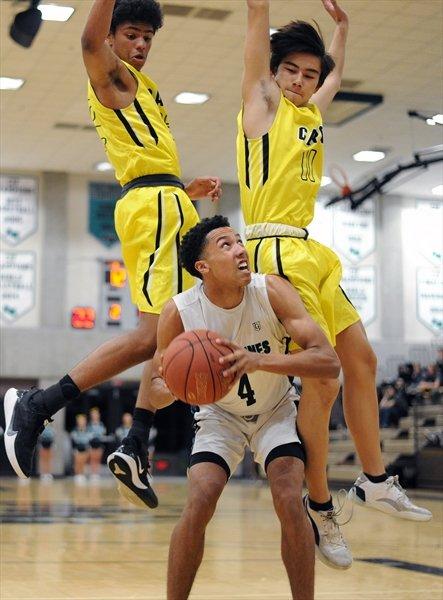 Capo Valley senior guards Langston Redfield (12) and Landon Li go up to block a shot against Aliso Niguel’s Isiah Frazilus during a game in 2020. Redfield and Li are the only returners from last season and have aided their coach in preaching defense to a young squad. (Ming Chung Lin, MaxPreps.com)

Its season ended with a CIF-SS Division 2AA second round loss to Fairmont Prep and, afterwards, most of the team graduated.

The only returning players are guards Langston Redfield and Landon Li.

Redfield averaged 11.8 points, 8.5 rebounds and 4.9 assists but now, as a senior, has really tried to take on a leadership role.

“We are bringing in a lot of new guys, but they are picking up things really quickly,” Redfield said.

“It’s been a great fit,” Gavin O’Neill said. “I love the culture over here that is based off hard work and defense.”

Mulligan’s defensive style is based on switching defensive assignments in an effort to disrupt the offense.

“Look at what Baylor did in the National Championship game. It shut down Gonzaga because they switched,” Mulligan said.

Last week against Beckman, Mulligan said Li had five steals in the first quarter because of his craftiness and his ability to jump in the passing lane from the switch position.

“I take pride in my defense, and now I’m focusing on helping these new guys,” Li said.

While Capo Valley’s season wasn’t cut short last year, Mulligan said being unable to practice due to coronavirus restrictions has effected his team’s ability to practice defense because they couldn’t play against each other.

But he said the positive side is that they haven’t overexerted themselves just yet.

Mulligan knows defense might not be important for everyone. In the NBA, teams average 112.4 points per game.

When a kid walks into Capo Valley’s gym, however, Mulligan knows what they will be asked of him.

“I assume that there are players that avoid coming here, but I also assume that people with good basketball minds might be more interested in coming here because we do have that trademark,” Mulligan said.

Capo Valley hasn’t played a game in a week. Its next outing will be on Monday, when it travels to Aliso Niguel.

While Mulligan might not know the exact outcome, he will make sure his players know the importance of solid defense.

Even if that wasn’t how he was raised.