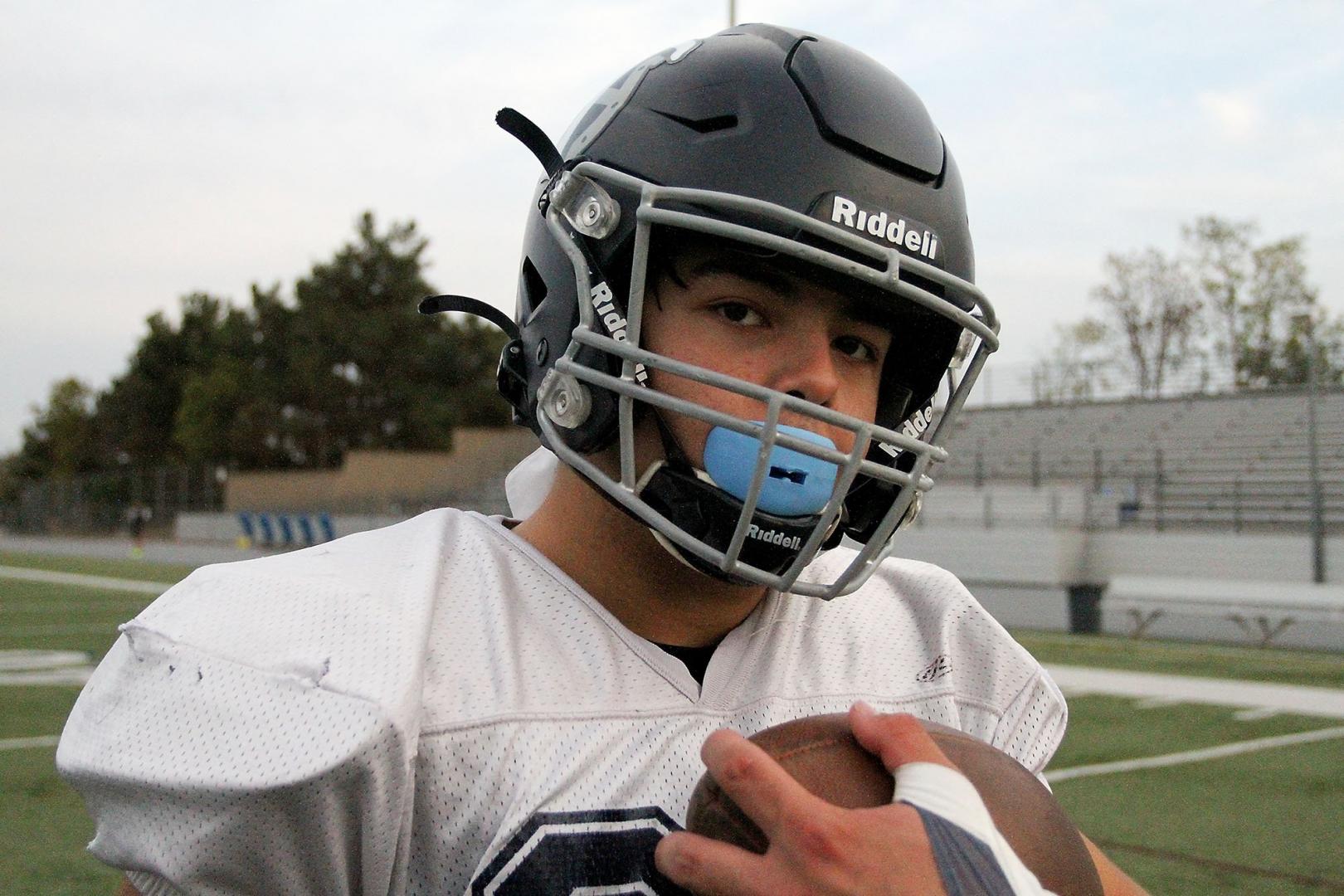 Trabuco Hills senior running back Drew Barrett poses after a high school football practice in Mission Viejo, Oct. 6, 2021. Barrett has rushed for 979 yards and 15 touchdoewns this season as the Mustangs are 6-1 this season. (Ryan Kuhn, SOCoPrepSports.com)

MISSION VIEJO — When Trabuco Hills senior halfback Drew Barrett is handed the ball he runs with a purpose.

He runs for his family: mom, dad, siblings, uncle and aunt, all Trabuco Hills graduates.

But mostly, he runs for himself.

Even playing through a pandemic-riddled five-game season last spring Barrett has accumulated more than 2,500 rushing yards and 32 touchdowns over his three varsity seasons.

“All my years at Trabuco Hills, I just want people to know how much work I’ve put in,’ Barrett said. “Anything is possible if you put your mind to it.”

Barrett didn’t always love football. In fact, he said he hated it.

“I didn’t really play much and was always standing on the sidelines, so I started focusing on other sports like baseball,” he said.

When Barrett’s parents enrolled him into their alma mater, his brother, Ty, was playing football so he thought he might as well give it a shot.

“My dad was a running back here,” said Drew Barrett, looking around Mustang Stadium with fondness. “My family has always supported me from the beginning.”

By Barrett’s sophomore year, he started to see success and loved sharing it with his brother.

“He loves to make plays and is just so competitive,” Trabuco Hills football coach Mark Nolan said. “He has a passion for the game.”

Barrett also learned during his sophomore year how to be a leader.

“We were going back to our old culture where people would give up,” Barrett said. “Everyone was cutting reps and I stepped up and just said this isn’t us, we need to get on track.”

The Mustangs went on to win their next five games.

He calls his style of running, one step and cut.

“I can make moves but that just wastes time and potentially wastes yards,” said Barrett, who finished with 187 yards and 2 rushing touchdowns against Tesoro this past Friday. “Might as well just run straight.”

Barrett has already eclipsed 320 rushing yards in a single game against Dana Hills earlier this season and is on pace for the school’s most rushing yards by a player in a single season since Shane DeCillo rushed for 1,563 yards in 2008.

“He has great vision. He has great balance and has a hunger to improve not only for himself but f or this entire team,” Nolan said. “From the very first day I got here to coach, he was in the weight room. He just loves the sport.”

Barrett doesn’t know what his future will look like. He plays baseball in the spring so a lot of options are still up in the air.

Right now he worrying about how the Mustangs can get back to the playoffs.