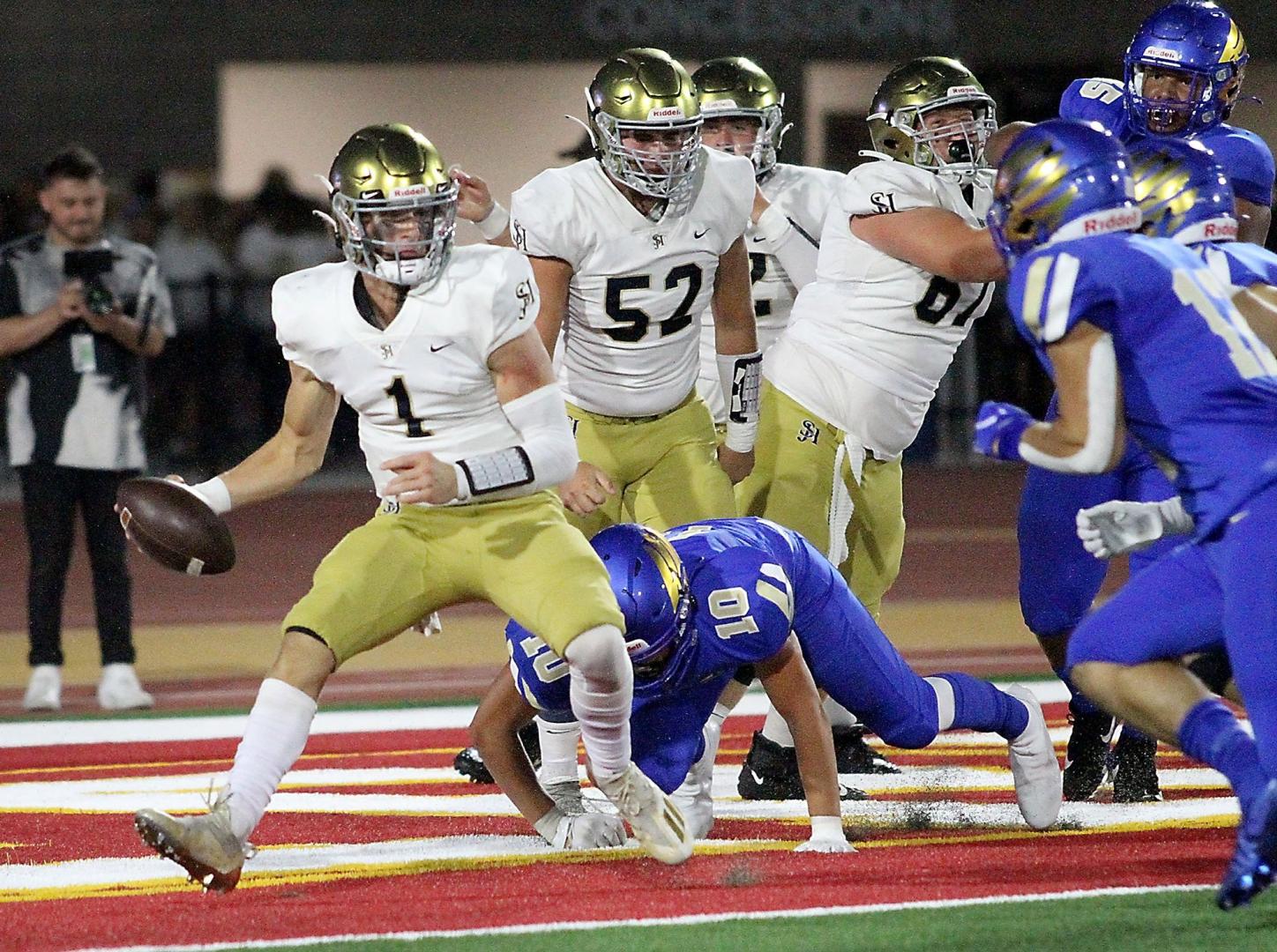 “You have to find out where you are at,” he said. “That is why you can’t be afraid to go against the Trinity League schools.”

The Stallions ended up losing to Santa Margarita 38-14 to kick off the 2021 fall season at Saddleback College’s new football stadium and showed some inexperience.

“We turned the ball over too many times,” Frith said. “You cannot five a team that good that many extra opportunities.”

Coming into the game, the Eagles were ranked No. 17 in California according to Max Preps.

But the Stallions didn’t show much intimidation.

San Juan Hills junior quarterback Colton Joseph made his first career varsity start and marched his offense down the field on the ensuing possession. He scampered out of the pocket for a 17 yard gain to get into the redone and then capped the drive off with  a 17-yard touchdown pass to senior Braden Pegan.

“He has tools but we have to put him in situations where he can be successful.” Frith said. “I saw some good things out of him but there were some growing pains.”

Joseph’s next few drives ended with and interception, a turnover on downs, a punt and a fumble.

Santa Margarita quickly capitalized with 21 unanswered points and soon enough it held onto a 35-7 lead.

“I can’t turn the ball over like that,” Joseph said. “I need to stay in the pocket more and make better decisions.

Not only was San Juan Hills committing turnovers, but the offense built around Potter and running back Jake Foye made it difficult to stop.

Potter transferred to Santa Margarita this past offseason from JSerra and in his first game as an Eagle he said the running game really opened up the ability to find his targets.

“Jake was pushing the ball down the field and getting big gains when we needed it,” said Potter, who finished with 285 yards passing and three touchdown passes. “Once you get the play action going receivers start to get open.”

Add a rushing touchdown a piece by Foye and Gage Grant and the Eagles were in control by halftime.

Santa Margarita’s offense cooled off in the second half as it was held to just a field goal.

“He is making some great catches and he is our team leader,” Frith said. “We are going to continue to find ways to get him the ball.”

San Juan Hills had opportunities to cut into their deficit again in the second half, but interceptions came back to bite Joseph.

“I just need to make better plays,” said Joseph, who thew for 145 yards.

The Stallions look to move on from the loss when they return home to take on Cypress.

Cypress is also looking for its first win after a loss to Foothill on Friday as well.

“Tonight was an opportunity to play one of the best teams in the county and it’s fine if we aren’t where we want to be right now,” Frith said. “The goal is to get there and improve.”