Weaver’s 43 points helps give the Wolverines their 19th win 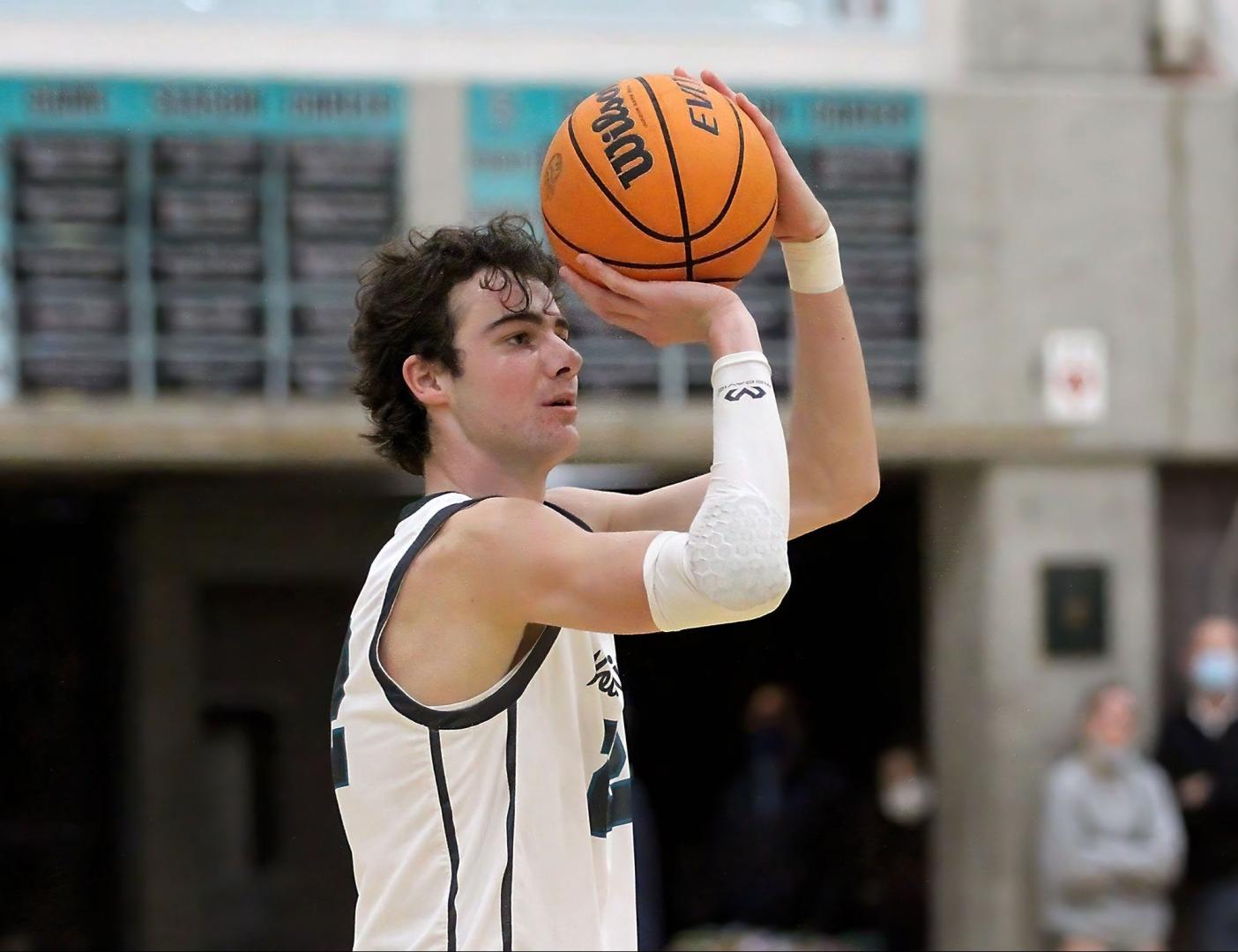 File - Aliso NIguel senior Tyler Weaver puts up a shot against University during a high school basketball game on Jan. 4, 2022. Weaver just set the program record for most points in a game, scoring 43 against Dana HIlls on Friday, Jan. 28, 2022. (RYan Kuhn, SOCoPrepSports.com)

ALISO VIEJO — Aliso Niguel senior Tyler Weaver extended to the rim for a layup, then immediately flexed towards the packed student’s section.

He had sent his team into overtime, and shared a moment of pure ecstasy with the crowd.

In the next period, Weaver not only iced the game to defeat Dana Hills 84-77, but he made history.

He scored a program record 43 points.

“[Weaver] carried us, he had such great resolve,” Wolverines head coach Keith Barnett said. “I’ve had him for four years, and he’s a rare, very special player.”

The game did not start as a typical historic night for Aliso Niguel, as the visiting Dolphins were tenacious in their scoring from tip-off, using the 3-pointer to take an early lead in the contest.

In the first couple quarters, there was just about an equal offensive intensity for both teams, but Dana Hills used the pick-and-roll to create mismatches and forced the ball inside methodically.

The Dolphins led 35-32 at half, but overall adjustments from the Wolverines, in addition to Weaver’s career night, flipped the script.

It took until three minutes left in the third quarter for Aliso Niguel to take their first lead of the game, but from there, the game plan was to get the ball to Weaver.

“We started off a little bit slow, but we finally found what works for us, and that’s getting the ball to the rack,” Weaver said. “My teammates found me a lot, Brandon [Novida] knew where I was at. He found me, and we hit a few big shots.”

There were six lead changes, including ties, in the fourth quarter, but Dana Hills jumped ahead in the final minutes.

Trailing by two points with just seven seconds showing on the game clock, Aliso Niguel had the last possession of regulation.

To no surprise, Weaver found the ball, then promptly drove into the paint from the elbow, and layed in the game-tying shot.

Aliso Niguel High School has the single loudest student section I’ve ever heard— “The Den” genuinely was like a sixth man on the court for the Wolverines tonight in the OT win. @alisoathletics @BoysAliso @alisoniguelh @SOCoPrepSports pic.twitter.com/4PPQ0ffY1Z

The senior forced overtime, and gave the Wolverines a much needed spark, tied 69-69.

After a couple of late-game Weaver free throws, and a clutch insurance 3-pointer by junior guard Jay Fromm, Aliso Niguel earned a hard-fought 84-77 win in OT.

The Wolverines improved to 3-2 in conference play, and will not match up against a Sea View League opponent until their road trip to El Toro on Thursday. Regardless of next week’s outcome, Aliso Niguel has already clinched second place in League, meaning they will have an automatic bid in the CIF playoffs this season.

In the meantime, the Wolverines will compete in the Nike Extravaganza at Mater Dei on Saturday afternoon, taking on Foothill.

“It was such a great energy game, I loved seeing all the high school kids back on both sides,” Barnett said. “Dana Hills played fantastic tonight, but we were fortunate at the end to make some big shots.”